Twelve days can change a lot, and for worse. More so, if you happen to live in uncertain times in a godforsaken region - Northeast - from where news takes days to make it to mainstream media headlines.

That is exactly what has happened to RTI activist and farmers' right leader Akhil Gogoi, who was awarded the Shanmugam Manjunath Integrity Award (2008) and the national RTI Award (2010).

On September 13, the Krishak Mukti Sangram Samiti chief, Gogoi, was arrested by the Assam Police on charges of sedition.

On September 25, he was rearrested by the police under the National Security Act (NSA).

Gogoi was initially arrested on charges of sedition for allegedly inciting people at a rally to take up arms against the BJP government in Assam.

Patchy reports by various sources cited different reasons for Gogoi's arrest. While some said he was held for instigating people to take up arms against outsiders (read Bangladeshis), a few others reported that according to the police Gogoi “delivered speeches against communal harmony and announced that they are ready to use hangdang (machete) and AK-47 rifle”. 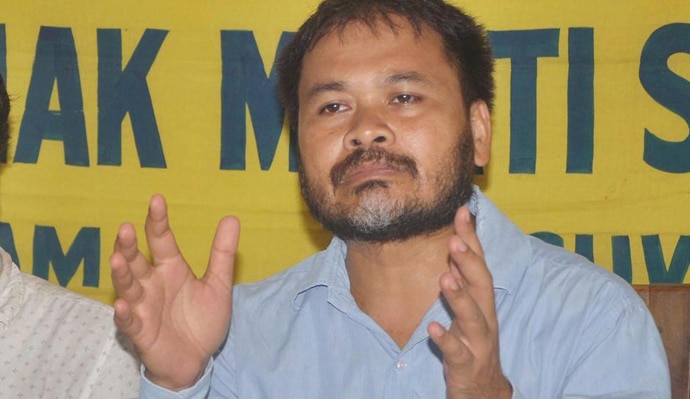 Gogoi’s, who is opposed to the Citizenship (Amendment) Bill 2016, has been at the forefront of protests against BJP's bid to provide citizenship to Hindu Bangladeshis by bringing about the controversial bill.

The bill seeks to make non-Muslim migrants from neighbouring countries (Afghanistan, Bangladesh and Pakistan) eligible for Indian citizenship if they have lived in India for at least six years. In other words, to make illegal migrants eligible for citizenship on the basis of religion.

And this is what Gogoi and a number of small outfits have been vehemently protesting against, besides opposing the "non-implementation of the 1985 Assam Accord" by the Modi government and the "dearth of constitutional safeguards to protect the rights of the indigenous people".

While the police have branded Gogoi as anti-national by slapping charges of sedition, the KMSS and hosts of other small organisations protesting against his arrest have dubbed it a move to eliminate their leader Akhil Gogoi.

"The way Akhil Gogoi was lifted into the police vehicle from his residence in Golaghat is a testimony that the police had ulterior motives like secret killing or a fake encounter,"  Vedanta Laskar, advisor to the peasant body and convenor of Gana Mukti Sangram, Assam, told mediapersons following Akhil's September 13 arrest.

So what exactly happed on September 25?

According to this report in The Wire.in, Gogoi was slated to be presented before the Dibrugarh district and sessions judge around 10am in response to his bail application.

But even before the court could hear his plea, a report was submitted accusing Gogoi under NSA provisions.

“A total of 12 cases have been put into the Nagaon superintendent of police’s report to accuse him under the NSA... None of the cases are new but have been included to accuse him of instigating against the state for some time,” his lawyer Pranjal Gogoi was quoted as saying by The Wire.in.

According to the lawyer, the "sessions court couldn’t have given bail to Gogoi in the sedition case since the new allegations were made". "So he was rearrested under the new charges and sent back to Dibrugarh jail. Now, the home department will form a three-member advisory council which will ask Gogoi to present himself before it,” he added.

While Gogoi is known for taking the BJP government head-on, he has a considerable following across the state.

According to the same report in The Wire.in, student bodies, including the powerful Assam Jatiotabadi Yuva Chatra Parishad (AJYCP), have demanded his “immediate and unconditional release". The  chorus for Gogoi's release also included the pro-talks United Liberation Front of Asom (ULFA) leader Jiten Dutta, who shared the stage with Gogoi in the Moran rally, which was where he supposedly made the seditious statements.

“Today, Gogoi is arrested under the NSA; tomorrow, it will be our turn. We strongly oppose this act of the government. It is an attempt to not only kill the jatiotabadi (sub-nationalist) voice in the state but also to kill democracy,” AJYCP general secretary Palash Changmai said.

KMSS leader Vasco De Saikia, meanwhile, has accused the state government of “keeping Gogoi under detention to influence the coming panchayat elections in the state".

I condemn imposition of NSA provisions on Akhil Gogoi.The Govt is functioning like dictatorship suppressing voices revealing their misdeeds.

Before drawing the wrath of the BJP government in Assam, it was the Congress and the then chief minister Tarun Gogoi with whom Akhil Gogoi had major run-ins at regular intervals.

Something that the former CM, tactfully highlighted today. “The arrest of Akhil Gogoi is nothing but exposes the government dictatorial attitude. Besides, in a democracy everybody has the right to criticize the government. Gogoi is very critical of the government and he was critical during my time also. But we didn’t put behind the National Security Act (NSA) as we didn’t consider him anti-national,” the former chief minister told ANI.

So, who is Akhil Gogoi and why does everyone want him out of the scene?

An RTI activist from Assam, who managed to gain the national media's attention as an activist for all causes - anti-dam agitation, land rights movement against "arbitrary eviction of people" from ecologically sensitive areas, anti-corruption crusade.

As is evident by Tarun Gogoi's above-mentioned quote, Akhil was arrested a number of times during the Congress regime and on a number of charges.

Some were as grave as the 2010 intelligence report by the Assam Police that accused Akhil Gogoi of having links with Maoists even as others called him an ULFA sympathiser.

But it was Akhil Gogoi's anti-corruption fight (in 2011, he even extended support to Anna Hazare's crusade against corruption and became the face of the movement in the Northeast) that earned him the ire of the then Congress minister who walked over to the BJP to become the most powerful man in the saffron party in entire Northeast - Himanta Biswa Sarma.

That Sarma, who is now the education and finance minister of Asaam, has earned considerable clout in the BJP (even more than chief minister Sarbananda Sonowal, who is seen more as a nominal head) was evident from the fact that his name was believed to be in consideration for a Union government post in the run-up to the recent reshuffle of the Modi Cabinet.

Akhil Gogoi has been particularly vocal against Sarma even when he was known as the right-hand man of Tarun Gogoi (with whom Sarma later had a bitter fallout) in the Congress. Akhil had accused the Congress government of massive corruption with "Sarma at the helm of affairs".

While arrests are not new for Akhil, who has managed to be in limelight - something that many of his followers-turned-critics accuse him of doing in the garb of activism - it seems this time his he is in for a long battle.