The party will face big trouble from its allies, mainly Prafull Kumar Mahanta.

The BJP has won Assam for the first time ever. Before it goes over the top in celebrating its arrival in the Northeast, the saffron party must pause and think if it is indeed a big victory.

Here are four reasons why BJP should go slow with the celebrations:

1. Anti-incumbency: The Congress had been ruling the state for the last 15 years and it had to go. At 82, Tarun Gogoi is an old man and there was a call for change. So, it is the Congress veteran who lost the election more than the BJP winning it.

2. Division of vote: The fact of the matter is the BJP has won Assam by sheer division of votes that is reminiscent of its grand victory in 2014 Lok Sabha Elections. With the AIUDF and the Congress failing to come together, the Assam verdict comes as no big surprise. 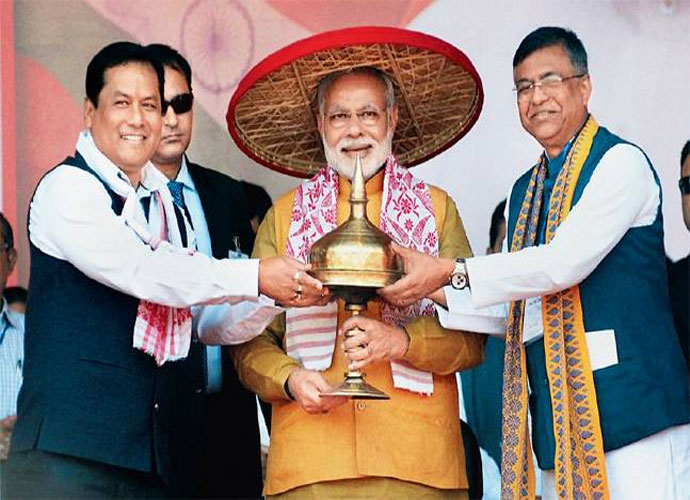 Prime Minister Narendra Modi during his election campaign in Assam.

3. Polarisation: In Assam, Muslims constitute a 34 per cent of the population. The BJP along with its ideological mentor, the RSS, had raised the bogey of illegal Bangladeshi immigrants as its prime campaign. The fear factor polarised the votes in favour of the saffron party.

4. Mahanta factor: BJP ally, the Assam Gana Parishad, has contributed significantly to the victory of the alliance. The Prafull Kumar Mahanta-led Assam-centric party is expected to win nearly 20 seats while the BJP will not be able to reach the halfway mark of 63. Therefore, it is not a standalone victory for the BJP.

If this tally lasts till the end of the counting, the BJP will face a big trouble from its allies, mainly Mahanta.

Post your comment
#AIUDF, #Prafull Kumar Mahanta, #Narendra Modi, #Assam Polls
The views and opinions expressed in this article are those of the authors and do not necessarily reflect the official policy or position of DailyO.in or the India Today Group. The writers are solely responsible for any claims arising out of the contents of this article.