As long as gods are used for votes, Indian atheists will get killed

But, as education and financial security increase, and religion continues to be a point of conflict, more citizens may take pride in mentioning 'no religion' as their religion.

31-year-old A Farooq has been killed in Coimbatore for being an atheist.

Reportedly, three out of the six people who hacked him to death were his “friends”.

Other than a few pieces on people arrested in the case, we have largely been silent about it.

Farooq, a scrap businessman, was born in a Muslim family. He was killed for not wanting to be any of these. 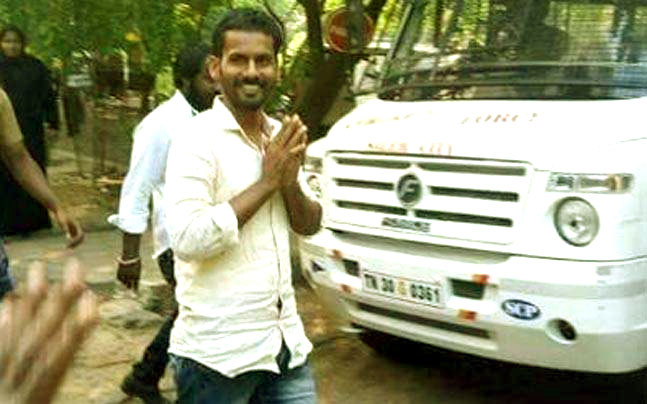 Reportedly, three out of the six people who hacked Farooq to death were his “friends”. Photo: Facebook/IndiaToday.in

In an Indian Express interview, Farooq’s devastated father, a Muslim by religion and faith, questions the beliefs of those who killed his son for not wanting to be one of them.

“If they killed him for being an atheist, I’ve decided to do what he did,” he says in anguish, revealing his intention to shun his religion.

The pain is evident. In the times of radical religionism, Farooq’s father presents a picture of balance; he sticks to the religious associations he formed at birth, his son chose to snap them off.

“I believe that atheists too have a right to live in this world”, he told journalist TA Ameerudheen.

And in this seemingly innocuous response he raises the most pertinent question of our times: Why can’t my religion coexist with yours. Farooq’s religion was “no religion”.

Growing up in middle class neighbourhood in a small city, I had more exposure to the Hindu way of living.

Ours was an all-Hindu neighbourhood with the exception of a small Muslim family headed by an elderly woman, known as chaachi by everyone in the mohalla. I doubt if I would have subscribed to Hinduism if my parents had followed any other religion. Photo: Pinterest/ Chinki Abraham

Nobody knew chaachi’s story, other than that her husband had abandoned her after fathering three children.

Elders, who had seen her moving into this neighbourhood remembered her journey from a helpless mother to the first working woman of the mohalla, struggling to raise her kids; all the more a reason for them to sympathise with her.

Now, chaachi is a nugget of memory from the neighbourhood I haven’t seen in years and which was also my first exposure to the subconscious rigidity (few) followers of a religion may show towards others. She was cared for by every family, but not treated equally.

I distinctly remember a playmate telling me he had been instructed to not dine at her place, and that her religion wasn’t the same as ours.

Only time would tell me that this rigidity was also reserved for people who digressed from the notion that one must belong to a religion.

For most part of my life I’ve followed faith and religious practices of my family. I still do, but in my own way, which often means being part of rituals for the sake of others.

And the arrangement works fine.

My parents happen to be Hindus, so naturally, Hindu is what I mention in the religion column of the forms I fill.

I have performed pujas whenever I’ve been asked to, got married in a Hindu ceremony, and, at times, fasted.

I believe that makes me a loyal Hindu (unless similar respect for other religions doesn’t make me a lesser one). I doubt if I would have subscribed to Hinduism if my parents had followed any other religion.

In which case it would have been about some other religion, some other way of living.

This is how religion works for most of us. It gets decided for us before we are born.

I got my religion, or caste, by virtue of the family I was born in, and I’m afraid that isn’t a very convincing reason to gloat about it or decry others — even if they don’t subscribe to any religion.

Farooq, as portrayed by the various reports covering his death, reminds me of an acquaintance who is silently atheist because he doesn’t identify with the “hullabaloo surrounding religion”.

His family is perfectly fine with his beliefs, just like Farooq’s father, because he doesn’t impose it on others. They are his beliefs, and his life.

Numbers show that the tribe of people not belonging to any religion is growing. It also means more people are drifting away from the faith their families follow.

Reasons for this may vary from having no reason to believe in God, to not being able to identify with any religion, to simply not caring about the boundaries that separate people from people.

PEW also found that few countries, such as France, Bosnia, Netherlands may see unaffiliated as the largest "religion" (if it can be called that) by 2050.

This scenario may be unlikely in India. We counted atheists for the first time during Census 2011; at a little over 33,000, they form just 0.0027 per cent of the Indian population.

But as education and financial security increase, and religion continues to be a point of conflict, more people may take pride in mentioning "no religion" as their religion.

Last year, people of different religions united in Mathura against an atheism convention. Reportedly, the police asked the organisers to cancel the event because it could have promoted "communal disharmony".

Political parties, which are usually the first ones to lap up religion-related issues, have maintained a stoic silence on these issues.

It’s gods that get votes, more people claiming there is no God may not be good for business.

Also read: Religion, why are we so afraid of it?

#Coimbatore Atheist Death, #Religion, #Atheists
The views and opinions expressed in this article are those of the authors and do not necessarily reflect the official policy or position of DailyO.in or the India Today Group. The writers are solely responsible for any claims arising out of the contents of this article.