Already reeling under job crisis, agrarian distress, allegations of graft and causing institutional damage, banking on Lord Ram could be the BJP's ticket back to the centre.

The much anticipated hearing in the Babri Masjid-Ram Janmabhoomi title suit, that was to start on January 10, was delayed yet again, with one of the five judges in the constitutional bench, Justice UU Lalit, recusing himself from the hearing.

Justice Lalit recused himself from the case after senior lawyer Rajeev Dhawan brought to the court's notice that he had earlier appeared for former Chief Minister of Uttar Pradesh Kalyan Singh in 1997, under whose tenure the Babri Masjid was demolished.

After the matter was pointed out by Dhawan, the five judges of the constitutional bench - which included CJI Ranjan Gogoi and Justices SA Bobde, NV Ramana, UU Lalit and DY Chandrachud - held an internal discussion, following which Justice Lalit recused himself from the case.

Rajeev Dhawan, while pointing out the fact that Justice Lalit has previously appeared for Kalyan Singh, said that he had no objection to him hearing the case.

The SC will now take up the case on January 29 and the constitutional bench would be reconstituted. 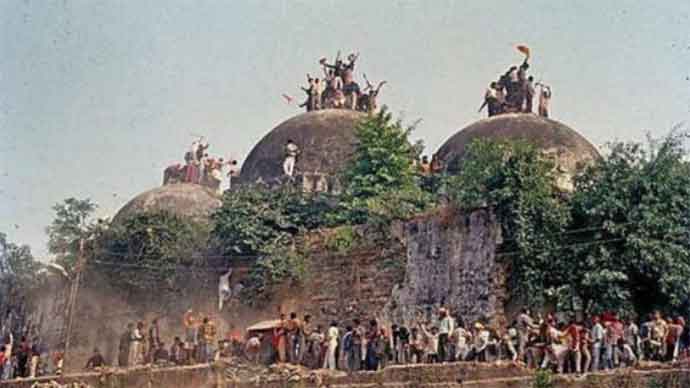 What about Ayodhya? The historically emotive issue has brought rich dividends for the BJP earlier. (Photo: India Today)

The case has been before the SC after the 2010 Allahabad High Court order dividing the disputed land among three parties – one for the deity (Ramlala Virajmaan), another for Nirmohi Akhara and the third to the original litigant in the case for the Muslims.

The outcome of the case could have serious implications for the ruling BJP as building the Ram Temple in Ayodhya has been part of the party's manifesto for long.

The emotive issue has already brought rich dividends for the party.

Not being able to deliver on its core promise would not go down well with BJP's right-wing support base, which thought the massive mandate the party got in 2014 would further push their agenda. Any such negativity could bode ill for PM Modi's second run towards the PM chair in 2019.

Already reeling under upper caste anger, the BJP could hardly handle another setback from its core vote base.

The recent 10 per cent reservation to the economically weak sections is being seen as the party's first olive branch towards this support base.

But it cannot be the only one.

Along with BJP's right-wing supporters, even RSS chief Mohan Bhagwat has been pitching for a quick solution to the Ayodhya impasse, calling for the PM to bring an ordinance on the same.

The BJP, on the other hand, is playing it safe so far, with the PM, in a recent interview to ANI's Smita Prakash, saying the centre would wait for the judicial outcome to take a call on the future course of action.

The delay yet again has further dampened the party's saffron poll plank.

The best-case scenario for the BJP would have a been a clear verdict before the 2019 polls. It would have give the party sufficient elbow room to even push for an ordinance in case of an unfavourable judgement.

Already reeling under job crisis, agrarian distress, allegations of graft and charges of causing institutional damage, banking on Lord Ram could be the BJP's ticket back to the centre.

With anti-incumbency writ large and shaken after the recent defeat in the Hindi heartland, the Ram Mandir is perhaps the BJP's road to political salvation. The consistent delay in the case could seriously hamper the party's prospects.

#2019 Lok Sabha elections, #Babri Masjid demolition, #Ram Janmabhoomi, #Ayodhya verdict
The views and opinions expressed in this article are those of the authors and do not necessarily reflect the official policy or position of DailyO.in or the India Today Group. The writers are solely responsible for any claims arising out of the contents of this article.