Balochistan in backyard, yet Pakistan will shed Kashmir tears at UN

But the question is will Sushma Swaraj expose the neighbouring country's atrocities against the Baloch?

After winning, what his rival opposition Pakistan People’s Party (PPP) declared were massively rigged elections, Pakistan's Prime Minister “Lion of Punjab” Nawaz Sharif told a cheering crowd in Muzaffarabad on July 22: “We are waiting for the day (when) Kashmir becomes (a part of) Pakistan," according to Firstpost.

Two days before that, on July 20, Pakistan officially observed a “black day” to express solidarity with the people of Jammu and Kashmir. That very day, Sharif’s Punjabi Muslim brother, the notorious Hafiz Saeed, chief of the Lashkar-e-Tayyeba who was born in the jihadi stronghold of Sargodha, staged a long march from Lahore to Islamabad in support of the Kashmir militants.

Since then, Sharif has written two letters to the United Nations secretary general to protest Indian atrocities in Kashmir. It was clear that Sharif is following the voice of his masters, who whistle from the Pakistan Army's headquarters in Rawalpindi.

As if to convince the same masters that he was even more loyal to the Army than Sharif, “Pakistani pappu” Bilawal Bhutto Zardari, PPP chairman, called up separatist Hurriyat leader Mirwaiz Umar Farooq a few months ago, accused Sharif of being soft on Kashmir, and promised another separatist, Syed Ali Shah Geelani, rallies in support of Kashmir, according to The Indian Express.

Meanwhile, the top gun of Pakistan, General Raheel Sharif, speaking on “Defence of Pakistan Day” September 6 called for respecting the aspirations of the Kashmiri people.

That Pakistan is a rogue state is evident by the fact that though it launched the failed Operation Gibraltar against India in Kashmir, claimed the life of 3,800 soldiers, including General Sharif’s uncle Major Aziz Bhatti, Pakistani kids are taught that India launched an unprovoked attack on the country in the dead of night.

“The true solution for this struggle for self-determination (of Kashmir) resides not in raining bullets upon the defenceless Kashmiri people but in heeding to their voice and respecting their aspirations. The Kashmir issue can only be resolved by implementing the UN resolutions,” General Sharif, whose official bio-data proudly says he belongs to the martial Rajput race, said during a recent ceremony in Rawalpindi, The Indian Express reported.

Calling Kashmir the “lifeline of Pakistan”, the General, who lost his elder brother in the war against India in 1971, without even naming the country, used a veiled threat of nuclear weapons.

The same threat was ominously issued a month earlier by Syed Salahuddin, chief of the Hizbul Mujahideen and United Jihad Council.

Thus, in this case it is not clear if it is the dog (Army) that is wagging the tail (jihadis), or vice versa - when it comes to jihad in Kashmir - as part of the grandiose Ghazwa-i-Hind, Islamist prophecy of conquering India.

At the same time, Pakistani military and civilian leaders are shedding tears on Kashmir, the soldiers are busy with their secret, dirty war in the killing fields of Balochistan, the world capital of enforced disappearances where at least 20,000 Baloch people have "been disappeared" and as many as 6,000 killed and dumped.

“This is ethnic cleansing, pure and simple,” Sher Mohammed Bugti, spokesperson for the Baloch Republican Party told this correspondent on phone from Geneva. He said a fresh military offensive targeted the bordering areas of Dera Bugti in Balochistan and Dera Ghazi Khan in Punjab.

According to Bugti, more than 15 people have been killed and eight injured in the Army raid, while security forces have abducted 26 Baloch civilians, including women and children.

He said at least eight gunship helicopters, 37 armoured vehicles and hundreds of troops took part in the operation. He added that 60-plus houses belonging to civilians have been burned down by the Pakistani Army. 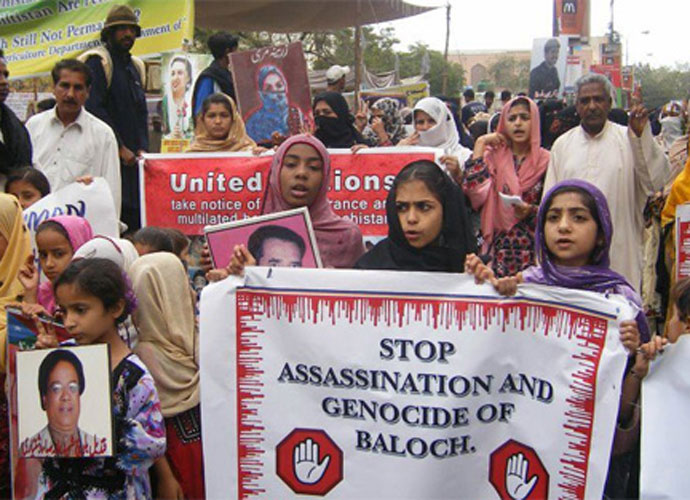 Prime Minister Narendra Modi had expressed solidarity with the people of Balochistan.

On the same day, when General Sharif was talking about respecting the aspirations of Kashmiris, his soldiers were committing brutalities in full public view in Turbat in occupied Balochistan.

According to the pro-independence Baluch Sarmachar media, the house of a former student leader, Pir Jan Baloch, has been under siege of Pakistani security forces since the evening of September 6 in Doctors Colony in Turbat.

Five women, two infants and a 70-year-old man are the occupants of the house. Local people are resisting the security forces' attempt to abduct the family. “However, the siege continues, depriving people in the house of food, water and other essential commodities,” Baluch Sarmachar reported.

While Sharif will be forcefully taking up the Kashmir issue at the UN on September 21, with American friends of the Baloch, Pandits, Sindhis and Gilgitis expected to protest outside the UN complex in New York, it is still not clear whether Union minister for external affairs Sushma Swaraj will help the Baloch cause by exposing the brutalities of the Pakistan Army and ISI, and demand right to self-determination for Balochistan in her speech at the UN.

Prime Minister Narendra Modi, while addressing an all-party conference and in his Independence Day speech too, had expressed solidarity with the suffering people of Balochistan.

Though Modi’s speech in defence of Balochistan is said to be reflective of the Modi Doctrine and Doval Doctrine - named after Indian’s top security boss Ajit Doval, who risked his life by his undercover posting in Pakistan to take out wanted terrorists - there are some Cold War era diplomats in the Indian Foreign Service who still believe in the Nehruvian policy of turning the other cheek to Pakistan.

It is for this reason that ambiguity shrouds whether India’s Baloch move is simply a tactical ploy or a more comprehensive strategic policy to safeguard India’s vital national interests in the warm waters of the Gulf -Balochistan’s 700-mile coastline forms the northern lip of the strategic Straits of Hormuz.

However, in a rare show of national unity, it was heartening to see the Congress side with Modi and disown the statement of former Union minister for external affairs Salman Khurshid, when he had criticised Modi’s stance on Balochistan.

Even Pakistanis have begun to speak out against the security forces' injustices in Balochistan. According to Pakistan’s former ambassador to the US Husain Haqqani, federal shipping minister Mir Hasil Bizenjo - a friend of Mani Shankar Aiyer – says: “If a referendum was held in Balochistan today, the militants would win."

He added that there will be no referendum, implying that the status quo would prevail through force.

#United Nations, #Kashmir Unrest, #Balochistan
The views and opinions expressed in this article are those of the authors and do not necessarily reflect the official policy or position of DailyO.in or the India Today Group. The writers are solely responsible for any claims arising out of the contents of this article.