Beawar: The town that gave us the Right to Information

On April 5, 1996, protesters descended on the Rajasthan town to demand the law.

In a country where memory is often either short or contested, how often does a social movement remember its origin and journey?

On Sunday, a large group of first-time activists of the Right To Information movement came to Beawar, a small town in Rajasthan, to remember their first protest 19 years ago. The protest had lasted 40 days at a busy traffic roundabout called Chang Gate -- it was here that the activists questioned the state government about its delay in granting the right to information even though the chief minister at that time, Bhairon Singh Shekhawat, had given an assurance.

After conducting five public hearings across the state to expose widespread corruption and exploitation by panchayat and block-level officials between 1994 and 1995, the activists had successfully pressured Shekhawat and extracted a promise to open the locks on government files. They waited a year. When nothing happened, hundreds of villagers descended on Beawar to demand the law on April 5, 1996.

The rest, as they say, is history. Not only Rajasthan but the entire country passed one of the most empowering legislations of the modern era.

A street exhibition was mounted Sunday to commemorate the event. Many residents gathered and cheered on. "Beawar ka Junoon, Bana Desh ka Qanoon," said the title banner of the exhibition. (Beawar's determination became the nation's law.) 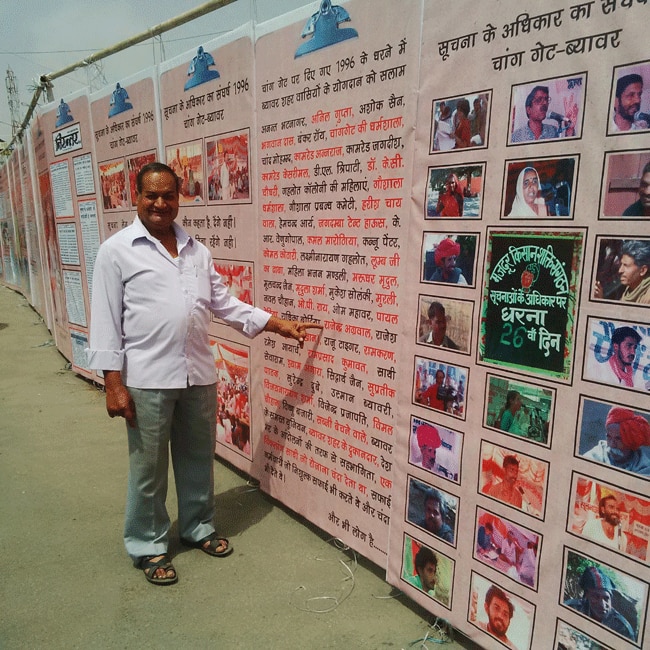 "RTI ki janambhoomi", some said with pride. Many looked for themselves In the displayed photos of the protest. "How old were you then?" they asked each other and laughed. Villagers crowded around the photographs and dragged their frayed fingers through the images to identify those they recognised. Slogans they shouted in 1996 were splashed across the exhibit panels. Old protest songs were sung again - many of them with old lyrics demanding a right to information law -- now with a line saying "we now have the law but we have to keep the fight on to expand it."

"What started here in Beawar gave us all a law which served as a key that opened up a treasure for us," said Mahendra Jain, a lawyer, 45, who had helped the activists with free food and water during their protest in 1996. Jain has filed more than a hundred RTI applications in recent years prying open files on land allotment, municipal works and so on. 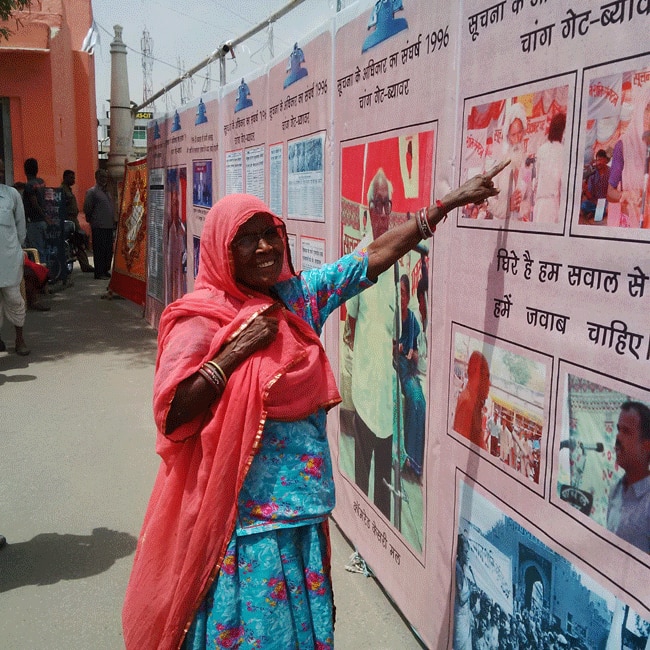 Activists Aruna Roy, Nikhil Dey and Shankarji saluted and thanked residents of Beawar for giving them free vegetables, tea, and small ten-rupee donations daily. They recalled "Room no 2" in the Chang Gate dharamshala where they held daily strategy meetings back then. Some villagers even recalled how pigs would enter the tents where they slept at night.

"It was not an easy fight," said Susheela Devi, who was at the first protest site. "We must not forget it. By remembering it, we are refuelling ourselves."

Unlike the United States, where information law was a potent tool for researchers and journalists, the RTI in India has been used to expose corruption, demand pensions and minimum wages, punish officials and vote out inefficient governments. On Sunday, Dey told the residents and activists the plan to build a museum in Beawar and said it will be a place of community pride. "Beawar ki Sampatti", Dey called it. The museum will not only commemorate Beawar's contribution but will chronicle the nationwide struggle for the law, it's progress, pushback and the continuing battle.

#Beawar, #Aruna Roy, #Rajasthan, #Right to Information
The views and opinions expressed in this article are those of the authors and do not necessarily reflect the official policy or position of DailyO.in or the India Today Group. The writers are solely responsible for any claims arising out of the contents of this article.