Why is Sangh now milking 'anti-nationals' like Bhagat Singh?

Its own cupboard of heroes may be bare.

Early in the morning on Wednesday, March 23, 2016, Prime Minister Narendra Modi tweeted twice. "I bow to Bhagat Singh, Rajguru and Sukhdev on their martyrdom day & salute their indomitable valour & patriotism that inspires generations" read the first, while the second tweet was, "In the prime of their youth, these 3 brave men sacrificed their lives so that generations after them can breathe the air of freedom."

I bow to Bhagat Singh, Rajguru and Sukhdev on their martyrdom day & salute their indomitable valour & patriotism that inspires generations.

In the prime of their youth, these 3 brave men sacrificed their lives so that generations after them can breathe the air of freedom.

The BJP has decided to add another Martyrs' Day to the already packed calendar of commemorations by announcing that March 23 would be observed every year to mark the execution of Bhagat Singh, Sukhdev and Rajguru 85 years ago. The BJP has also asked its state units to mark the day with fervour and follow this by singing the Bollywood hit from the film Shaheed - "Mera Rang De Basanti Chola" (no explanation on the link to Bhagat Singh) while celebrating Holi.

Also read: Pakistan is proving to be a bigger fan of Bhagat Singh than RSS

Friday, when Christians will observe Good Friday will be marked as "Aakrosh Din" (Anger Day) by burning effigies of the psyche of those who "insulted the martyr". An entire day is going to be spent in countering Shashi Tharoor's wisecrack of comparing JNU Students' Union (JNUSU) president Kanhaiya Kumar with the freedom fighter.

Modi's tweet and the party's programme would be justifiable if Bhagat Singh was an icon of the BJP or any other affiliate of the Sangh Parivar. A close look at what iconic figures of the Parivar were doing between in the late 1920s and till 1931 when Bhagat Singh was hanged along with his associates, is revelatory.

Keshab Baliram Hedgewar formed the Rashtriya Swayamsevak Sangh (RSS) in 1925 and was completely focused on developing its organisational framework while steering clear of anti-colonial politics. But he had time to "protect" Hindus during clashes with Muslim groups in Nagpur and asked aides to raise 16 squads of swayamsevaks and spread out through the city in "vulnerable" Hindu areas.

Hedgewar aimed to reinforce the consciousness of the Hindus and integrate them. He saw the Congress as the greatest impediment in achieving his political goal. He had no time or interest for confrontation with the British and earned "good behaviour" ratings in annual intelligence reports.

In December 1929, when the Congress set Purna Swaraj as its goal, Hedgewar was grudging in his support. When Mahatma Gandhi launched Dandi March, followed by the Civil Disobedience movement, the RSS stayed away, though he allowed swayamsevaks to join the movement in their individual capacity.

Because of pressure from within his ranks, Hedgewar eventually joined the satyagraha but was arrested almost immediately. He stayed behind bars for barely seven months - the only time he was in jail. He was eventually released and was busy in Varanasi campaigning to strengthen the RSS when Bhagat Singh was executed. He had no views on this gross travesty of justice.

The other iconic leader of the Sangh Parivar - though an "outsider" - was Vinayak Damodar Savarkar, the man who inspired Hedgewar to form the RSS. The author of 'Hindutva - Who Is A Hindu?' was, at the time of Bhagat Singh's trial, busy organising mass pan-Hindu dinners in which people from upper castes broke bread with untouchables and other lower castes.

He was interned in Nagpur after his release from jail when he pledged to the British he would eschew politics. This was one of the several occasions when Savarkar pleaded for leniency. In fact, three years after Bhagat Singh was hanged, Savarkar pleaded for release and promised he would abide by law and constitution even if he joined politics. Clearly, anti-colonial struggle was not part of Savarkar's scheme. 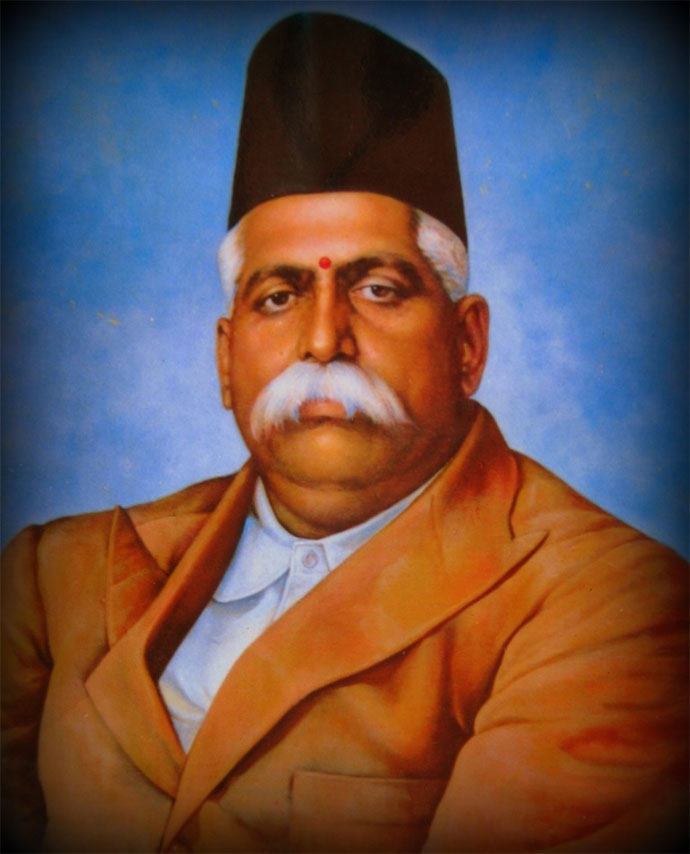 Bhagat Singh was a radical youngster and tilted towards Marxism in the latter part of his life. His legendary essay is titled "Why I Am An Athiest" and will be of no comfort to today's votaries of Hindutva, for whom religion remains the basis of politics.

The martyr assassinated JP Saunders. He also threw a bomb inside Parliament when it was the Central Legislative Assembly, because he knew that it "takes a loud voice to make the deaf hear". His revolutionary zeal was different from that of the early romantics and he did not use any religious motifs in his campaigns. He was part of the Hindustan Republican Association (HRA) and by 1927-'28 when he had moved closer to Marxism, he added "socialist" to the organisation's name to make it Hindustan Socialist Republican Association (HRSA).

Bhagat Singh may be eulogised today by the BJP and Sangh Parivar and converted into a cultural kitsch, but his politics is immensely problematic for the votaries of the Sangh Parivar. Yet, this is being conveniently sidestepped and only his name is being invoked. This is possible because the popularity of Bhagat Singh or other legendary national leaders is far greater than an understanding among people of their politics.

Not just Bhagat Singh's politics but also the circumstance surrounding his execution holds many difficulties for the BJP. The Lahore edition of The Tribune dated March 25 published the news of the hanging with a banner headline followed by several smaller ones below on the page. VD Savarkar - Another noted leader of the Sangh Parivar.

These mentioned that relatives were denied a last interview, that there was a veil of secrecy prior to the execution and that the bodies were secretly disposed off. Peculiarly, these methods are still used by the modern Indian state and if anyone questions this act of the government, s(he) is labelled anti-national.

Why then is Modi or his party trying to appropriate Bhagat Singh into their political pantheon? Bhagat Singh, in fact, is not the first of the national leaders who has been sought to be appropriated into the Sangh Parivar's pantheon of iconic leaders.

Sardar Patel and Dr BR Ambedkar are just two other national icons whose politics was at complete variance with the RSS. Yet they are increasingly being shown as being from the same political stable. The political stance of both legendary leaders is either partially projected or twisted out of context.

Much is made out of Patel's differences with Jawaharlal Nehru and his role in rebuilding the Somnath temple but his firmness towards the RSS and its sarsanghchalak after the assassination of Gandhiji and the ban on the RSS is ignored.

In its drive of appropriating Patel, the Sangh Parivar makes no mention that it was saddled by Patel with a written constitution despite wishing to avoid such a commitment. He made it a precondition before lifting the ban. Even in the case of Savarkar, Patel was a tough negotiator and secured his pledge to stay away from active politics before his release after arrest in February 1948.

Similarly, Ambedkar is mentioned in parts and there is no mention of his stance that the majority community of the nation owed a sense of security to the minority - a sentiment that goes against the basic grain of the BJP's definition of minorityism.

There are many other areas and issues on which the BJP would have troubles with Ambedkar's arguments and views. But, the BJP or its larger political fraternity needs to appropriate national icons for two main reasons.

Firstly, the cupboard of icons in the Parivar is bare and even those who are there - Atal Bihari Vajpayee for instance - are often not given much credence.

Secondly, the RSS had no involvement with the freedom struggle and was focused solely to expanding itself and setting up Hindu-Muslim conflict. For instance, during the Quit India movement, Syama Prasad Mukherjee, remained a minister in Bengal and collaborated with the British.

Though he was a member of the Hindu Mahasabha at the time, he later became founder president of Bharatiya Jana Sangh. The Sangh Parivar may consider its own leaders very important but to popularise them among people would be a long haul because they made little contribution to public life and remained restricted to a section of Hindu society.

#Narendra Modi, #RSS, #Bhagat Singh, #Sangh Parivar
The views and opinions expressed in this article are those of the authors and do not necessarily reflect the official policy or position of DailyO.in or the India Today Group. The writers are solely responsible for any claims arising out of the contents of this article.