Having won the 2010 and 2015 assembly polls on the strength of his government’s impressive performance and delivery, Nitish believes that 2020 polls would be no different.

As Bihar looks set for assembly elections in October this year, Bihar Chief Minister Nitish Kumar has told his party men in districts to deliver just one message to the people of Bihar: “Just tell them the truth. Let the people, especially the youth, know where Bihar was till 2005 and how the JD-U-led government has taken the state forward on the path of development since then.” 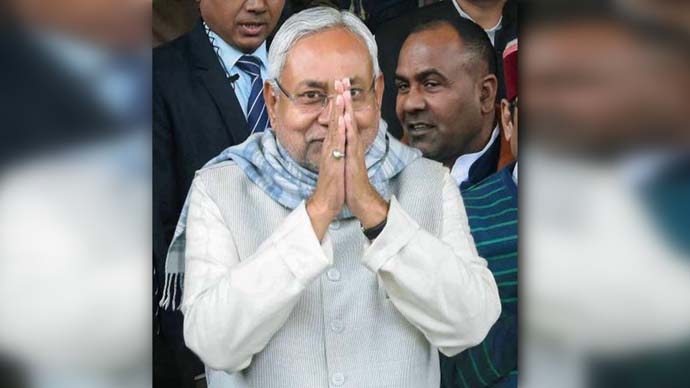 Barring the 2014 Lok Sabha election, Nitish Kumar was always been on the winning side. (Photo: PTI)

Kumar has put his message across, as he addressed consecutive webinars for six days, spanning over 24 sessions wherein the CM connected with more than 20,000 party workers from all 38 districts of the state. Having won the 2010 and 2015 assembly polls on the sheer strength of his government’s impressive performance and delivery, the CM believes that the 2020 polls would be no different. “Leadership may be hard to define, but it is easy to identify during a crisis situation,” said Bihar Cabinet Minister Ashok Choudhary. Choudhary, one of the three ministers who also addressed the Chief Minister’s Webinar, believes Kumar's stature alone would be the determining factor. “When the entire world is going through difficult times with the pandemic testing everyone, people of Bihar have noticed how the Chief Minister has risen to the moment, demonstrating resolve, courage, empathy and persistence while following a relentless work routine to help those in the need. Now, more than ever, as Bihar needs the strong and effective leadership of Kumar, our party is on a strong wicket,” he said.

So what is the strategy? JD-U spokesperson Rajiv Ranjan Prasad cited Union Home Minister Amit Shah’s June 7 virtual rally speech, which he believes, has made the difference between the two alliances clear. He said, “The Union Home Minister brought out the contrast between the Kumar government and the one that RJD led in Bihar from 1990 to 2005. Bihar growth rate was 3.19 per cent during RJD regime, it reached 11.3 per cent under Kumar. RJD’s last budget size was 23800 crore, now it has gone beyond 2.11 lakh crore. Per capita income was at 0.12 per cent growth under RJD, now it has jumped to 4.8 per cent. Only 22 per cent people of Bihar had access to electricity under RJD, while now it is available for 100 per cent people. There were just 34 per cent Pucca roads in Bihar then. Now it is 96 per cent. The industrial growth rate was negative under the RJD regime; it has gone up to 17 per cent now. We just need to talk about facts,” Prasad added.

Kumar has been the fulcrum of Bihar politics since the JD(U) defeated RJD in 2005. Since then to the 2019 general election, Bihar has seen 4 assembly and 3 Lok Sabha polls. And barring the 2014 Lok Sabha election, Kumar was always been on the winning side.

Post your comment
#BJP, #JD(U), #Nitish Kumar, #Biharassemblypolls2020
The views and opinions expressed in this article are those of the authors and do not necessarily reflect the official policy or position of DailyO.in or the India Today Group. The writers are solely responsible for any claims arising out of the contents of this article.