The extremely poor pass percentage only goes on to say that the rot in education system runs deeper.

It's been a year since the "toppers scam" in Bihar came to light, but schools in the state still seem to be producing "prodigal" students.

The Bihar School Examination Board today (May 30) declared that 64 per cent of the Class 12 students have failed in this year's examinations.

The, results, however were "out" last year itself when the "toppers scam" blew the lid off a nexus of corruption in Bihar's education system. How parents, teachers, officials in Bihar Board and government helped undeserving students become toppers by paying huge amounts of money.

This year though such aspiring toppers had little chance of manipulating the results. Or so it seems.

#Bihar 64 % 12th Students failed in Bihar Board Exam Nation's worst board result ever. This ia the truth of last year's merit holders.

Bihar Board Result debacle, Education minister of Bihar Dr. A. Chaudhary must shame it and State govt. He owe resignation on moral ground.

Bihar Board result shows another failure of @NitishKumar govt in bihar.

Sample this: Of the total 12,40,168 students who appeared in the Class 12 examination (Science, Commerce and Arts streams altogether) this year, as many as 7,94,622 students failed to clear the examination. 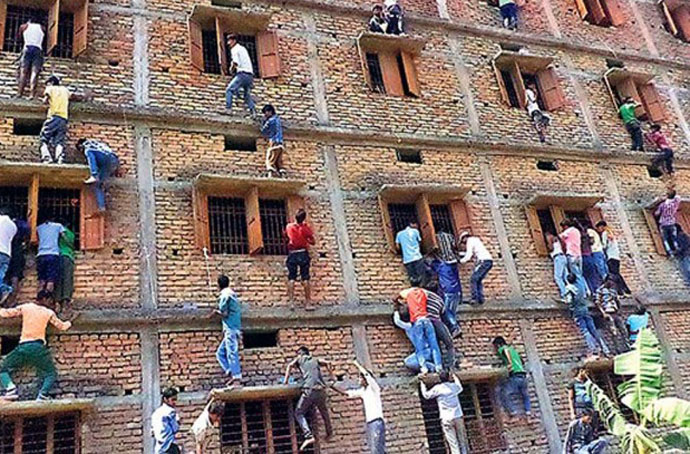 In 2015, Bihar earned notoriety when photographic evidence of mass cheating in board exams showed adults scaling walls to pass written answers to students through windows.

The "toppers scam" came to light last year when on May 31, India Today posted a video of an interview with Class 12 Bihar School Examination Board (BSEB) arts topper Ruby Rai, who scored 90 per cent but said that political science is a subject about the “preparation of food”. Worse, she pronounced it "prodigal science".

Another student, Saurabh Shreshtha, failed couldn’t answer basic questions about the science subjects he topped in. With a national media relentlessly focussing on the news, the Bihar government was forced to admit that there were obvious signs of cheating.

The state ordered a re-exam for 14 toppers, while Ruby Rai initially avoided showing up, Saurabh Shreshtha and another science topper, Rahul Kumar, failed the re-exam. Ruby too failed the re-test when she finally appeared and was arrested, but granted bail later.

An FIR was lodged, the results of the "fake toppers" were cancelled and several BSEB functionaries, including chairman Lalkeshwar Prasad Singh, jailed.

Last heard, the special investigation team (SIT) probing the scam arrested Ruby's father Avadhesh Rai from Bhagwanpur in Bihar this February. He was absconding after the scam was unearthed last year. The SIT arrested him with the help of local police in the Vaishali district of Bihar.

This year's result clearly show that the BSEB has made things stricter resulting in such large number of students being declared unsuccessful.

"This year the pass percentage has gone down as we had put in place stringent process right from filling the examination forms till evaluation," Anand Kishore, BSEB chairman, was quoted as saying.

"Those who have been declared toppers, we have reviewed their results by a special committee. Only after we were satisfied thoroughly, we declared the results today," he added.

Of course, past blemishes don't take away the credit from this year's toppers. Kushboo Kumari from Simultala School in Jamui topped in the Science stream — she scored 86.2 per cent. Priyanshu Jaiswal from College of Commerce topped in the Commerce (81.6 per cent), while Ganesh Kumar from Samastipur topped in the Arts stream (82.6 per cent).

For the first time, the BSEB has also declared to provide Rs 1 lakh to the Class 12 toppers in all the three streams along with a laptop and a Kindle e-reader.

But prizes and accolades can't undo the fact that the state failed to provide adequate guidance to its students. The extremely poor pass percentage only goes on to show that the rot in Bihar's education system runs deeper. How students couldn't even score the minimum marks needed to pass in absence of corrupt means.

The BSEB may have won the first step in revamping the education system, but it still has a long way to go before addressing the root cause of the problem and ensuring a bright future for its students.