Forget exit polls, Bihar's verdict will be a Game of Others

While they won't win many seats, they are capable of wrecking the ship of either alliance and the worst-hit will lose the game.

Others, consisting of independents and small parties, have been a force to reckon with in Bihar politics for the past four decades. They have played a key role in hung assemblies, especially in 1990, to elect Lalu as chief minister of the state for the first time and also in 2000 to elect Rabri as CM (though to a lesser extent as compared to 1990).

In March 2005, others got 37 seats, which led to a hung Assembly and the imposition of President's rule for six months. In the re-elections held in October in the same year, the Nitish-led NDA (JDU+BJP) defeated Lalu's RJD to end 15 years of his infamous regime and "others" were reduced to 22 seats. Since then, their influence has reduced considerably and in 2010 when the NDA swept the state, their seat tally fell to the lowest ever: eight seats.

Earlier, they would win 39 to 55 seats, with vote share as high 32 per cent. In untied Bihar (till 2000), the South Bihar parties demanding statehood for Jharkhand had a significant presence and were included as "others". Many independents have also been winning from Bihar (the highest being 30 in 1990). The majority of them were proverbial "bahubalis" win the robinhood/anti-establishment image and some of the electorate had to vote for them due to fear apart from other factors. Over the years, some of them have joined mainstream political parties. The average number of "other" candidates per seat shot up in the 1990s after the Congress party's influence weakened in the Hindi heartland in the wake of the onslaught of mandal and kamandal politics. A total of 22 other candidates contested in 1995 and this number fell by nearly 10 levels in the 2000s after the integration of many independents into mainstream political parties. The others have secured close to 3,000 votes per seat per candidate in state polls held since 1977.

In 2010, this came down to 2,800 votes per other candidate per seat. It is important to note that even during the clean sweep witnessd in 2010, "Others" impacted the results in as many as 27 seats, where the margin of victory was less than 2,800 votes. Therefore, in close elections like 2015, they could actually determine the results in many more seats. Bipolar contest at Others' mercy

The 2015 elections are clearly a bi-polar contest between Mahagathbandhan and National Democratic Alliance. No other party is in the frame. With the high-pitched campaigns and heavy stakes, the "others" vote share is expected to reduce in these elections. Various exit polls show vote share for the category in the range of 10-20 per cent and have limited their seats to 5-18. I believe that they would not be able to get more than 10 seats in any case and can possibly garner a vote share of anywhere between 12-17 per cent (depending on how rebels perform). Some prominent candidates in the category include the Left parties, Pappu Yadav's new venture, NCP, AIMIM and the independents.

Vote share and seats as per prominent exit polls 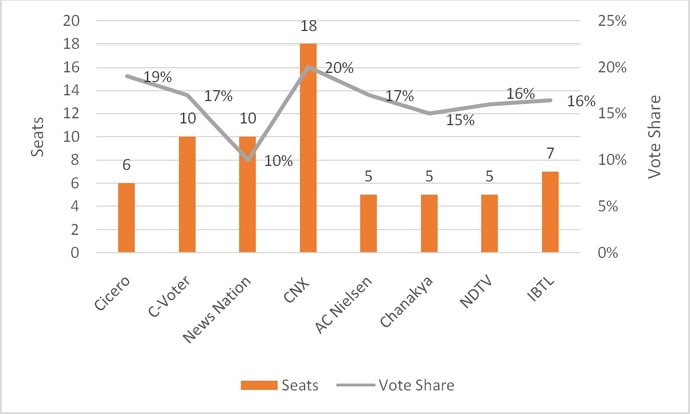 Six smaller parties (Three of Left, SP, BSP and NCP) have registered a vote share in excess of 20 per cent in the past three elections, each having weaved their own vote banks - BSP (Dalits), Left Front (lower class), NCP (Muslims) and SP (Yadavs and Muslims). They have a decent combined presence in one-third of the total seats.

Others may have well been reduced to less than 10 per cent of their current vote share had it not been for the rebels. There are many rebel candidates, more from the MGB as few sitting MLAs as well as candidates have been denied tickets. JDU, which contested 141 seats in 2010, is contesting only on 101 seats.

The corresponding number for RJD is 101 against 168 while the Congress is contesting 41 against 243. Some of the dejected/denied candidates have revolted and are now contesting as independents or from smaller parties. Similarly, from NDA side, LJP contested 75 seats last time, but has to be content with 41 this time. The BJP, on the other hand, has denied tickets to some of its MLAs. For example, in Phase 5, the BJP had 23 MLAs earlier, but contested only on 21 this time and retained only 14 candidates. As per my research, both alliances combined were facing serious rebel candidates in one-third of the seats till Phase 3.

A rebel candidate from say MGB will not necessarily damage the prospects of MGB alone and vice-versa. We must also factor in the caste of the candidate. An upper caste MGB rebel has the ability to damage NDA as well.

Revenge is the key theme for "Others" in Bihar this time. Pappu Yadav is seeking political revenge from Lalu due to personal acrimony between the two. He is also upset with NDA for not inducting him. Mulayam and Pawar, on the other hand, want to settle scores with Nitish and Lalu for offering them few seats and embracing Congress.

The CPI wants is upset with Nitish as he duped them and joined hands with Lalu and Congress. It must be noted that JDU fought the Lok Sabha polls in alliance with CPI in 2014. These trends show that many candidates are not only fighting to win, but also to spoil the chances of one or both of the big alliances.

The average number of candidates per seat in 2015 is 14, which essentially comes to 12 other candidates per seat. While the "others" won't win many seats, they are capable of wrecking the ship of either alliance and the worse-hit alliance will lose the elections.

Will they turn kingmakers?

Most of the polls show a close contest and irrespective of how many seats the "others" end up with, they may actually be sought after the verdict leads to a hung Assembly. A poll of polls (7 polls- six released on Thursday, one by NDTV on Friday) shows a hung Assembly, with NDA at 118, MGB at 117 and Others at eight. If this happens, the others/independents/rebels will have the last laugh and Bihar may revisit the times of horse trading days it saw in the 1990s.

Note: All parties and independents excluding the top five parties, in terms of vote share, are considered as Others

(With inputs from Sujata Singh.)

#Others, #Bihar polls
The views and opinions expressed in this article are those of the authors and do not necessarily reflect the official policy or position of DailyO.in or the India Today Group. The writers are solely responsible for any claims arising out of the contents of this article.