While Bihar verdict has shocked many people, the “Others” have emerged as game changer (as predicted in the previous post) despite a pre-dominantly bipolar contest. "Others" consisting of smaller parties and independents won seven seats, causing a damage in another 88 seats across the state.

Also read: Forget exit polls, Bihar's verdict will be a Game of Others

In 2015, the main fight was between JDU led MGB and BJP led NDA consisting of three and four parties respectively. The clear battle between the two alliances and comparatively lower vote share of ‘Others’ in 2014 LS (16 per cent) led analysts to believe that they would garner much lower vote share compared to 2010. However, they have sprung a surprise and recorded a respectable vote share of 24 per cent (+8 per cent from LS 2014, -3 per cent from VS 2010). They have snatched vote share from both alliances MGB (+3 per cent) as well as NDA (+5 per cent).

While “Others” did not win many seats (only 7), they rocked the boat of either alliance in c.100 seats as shown above. In the end the alliance which they damaged more, lost the polls and in this case it was NDA (5 per cent vote share loss vs 3 per cent of MGB). The bipolar contest was a three-cornered fight from the beginning which nobody anticipated. The only difference being that the third contender was not common across seats. In some seats it was the Left parties (CPI, CPIML, CPM), Third Front (Pappu Yadav’s / Mulayam Yadav’s Party), Pawar’s NCP, AIMIM, BSP, Shiv Sena or Independents. There was no co-ordination between ‘Others’ otherwise the magnitude of damage which they could have incurred on both alliances could have been massive.

"Others" have mostly benefitted from split of votes in both NDA as well as MGB as shown below. Others gained 5 per cent votes from NDA consisting of Upper Castes, Dalits, Yadavs and Most Backward Classes. They also gained 3 per cent MGB votes essentially from their MY vote bank. To summarise the impact:

Support Base of Others Along with Parties 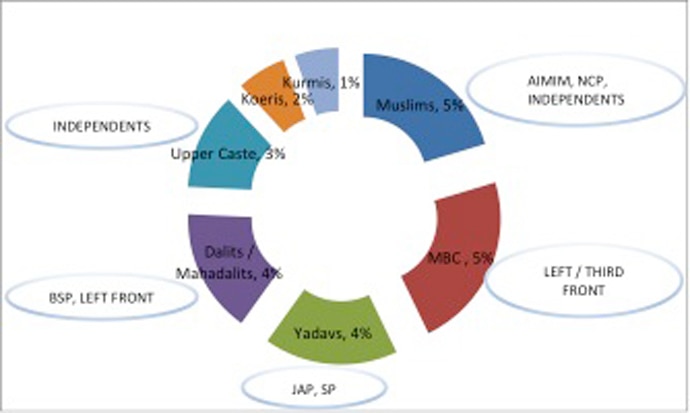 Three reasons why ‘Others’ performed well in Bihar

Traditionally “Others” have been a strong force to contend with in Bihar recording a vote share in the range of 25 per cent-30 per cent with seat tally as high as 50+ 1990 in the undivided state of Bihar. In the past two elections of 2005 and 2010, their influence has somewhat reduced as BJP led NDA swept the elections. Their influence further diminished when they won just 16 per cent of the share in the 2015 Lok Sabha election. In 2015 elections they have made a comeback. 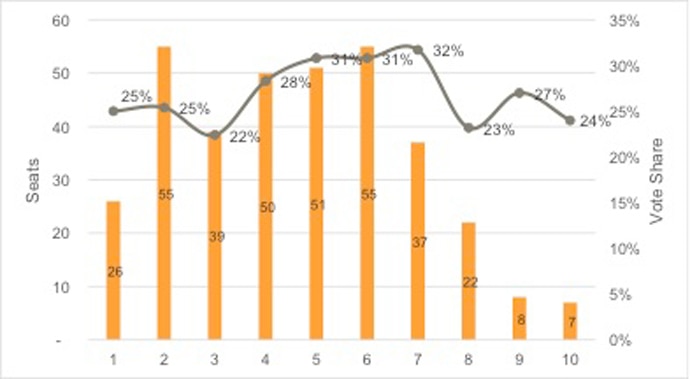 Also, this is not peculiar to Bihar, a similar analysis of recent elections in the States bordering Bihar show that even UP and Bengal appear to have similar issues (Constituencies on State Border) with Jharkhand reporting a much lower impact of ‘Others’ in its border districts.

The key reason for the substantial difference in voting behaviour is the substantial feeling of "neglect" amongst many voters in the "border" districts. In case of Bihar, per capita income amongst the border districts is half that of inner districts, industrialisation is weaker and education accessibility (eg: Colleges) is significantly worse than the inner districts.

This feeling of "neglect" is well exploited by numerous local wealthy (primarily landholders) who promise to solve their ongoing problems through personal attention. In many cases, these local wealthy also tend to be local Bahubalis who can bull doze people to vote for them. The border districts in Bihar are peculiar because even though they are far less wealthy than the inner districts, they account for 73 per cent of the large landholdings (> 10 ha) in the State thereby being home to big landlords / zamindars.

These local wealthy along with substantial wealth and muscle are able to deliver a decent number of votes or back candidates / independents (not from mainstream parties) who damage the chances of leading parties.

Out of the 7 “Others” who won in 2015, 3 belong to CPI-ML and 4 are independents. 3 out of these four independents are rebel candidates from BJP, JDU and RJD (1 each). 5 out of 7 of these constituencies were won by the NDA in 2014 (assuming all MGB allies as one party). In the 9 seats where independents were runner up, MGB won 7 out of them. This is the same tally as the Lok Sabha election in 2014.

"Others" got more votes than the victory margin in 79 (1/3rd) of the seats in 2015 state polls. 70 per cent of these seats were won by MGB and 30 per cent by the NDA. However, the damage is more to the NDA because in 2014 Lok Sabha, NDA was leading in 45 per cent of the constituencies again assuming votes of all MGB partners is counted as a single party.

Others cut into the vote bank of both NDA as well as MGB where-ever prominent Others candidates belonged to the same caste or same caste combination support of the two alliances. Upper castes were peeved at NDA for openly declaring that they will a backward a CM. Yadavs have a historical acrimony with Kurmis and hold Nitsh responsible for their political status decline in the state and have supported in lesser numbers JDU candidates compared to RJD.

The share of “Others” has had a substantial impact on the elections in Bihar. They damaged the prospects of NDA more than MGB and were one of the primary reasons for the loss / poor show of NDA in the elections.

It also has another important dimension, voters are sending a message to the state capital to pay better attention to their local needs and wants whether it is jobs, education or other services. As the Bengal, UP and now Bihar examples show, districts further away from the capital appear to struggle from attention and action even as the ‘inner’ districts do well.

More research work is needed on this subject to enlighten policy makers and ruling parties to substantially influence the fate of those living in these constituencies. The “Others” are not to be ignored anymore because they are capable of deciding the fate of elections.

#Mahagathbandhan, #JD(U), #RJD, #Bihar Results
The views and opinions expressed in this article are those of the authors and do not necessarily reflect the official policy or position of DailyO.in or the India Today Group. The writers are solely responsible for any claims arising out of the contents of this article.