BJP will never be Congress-mukt: It has become the party it hates

The BJP does not tire of bragging that it is a party with a difference but in reality it is stuck in the same rut.

Like the Congress of yore, is the BJP beginning to suffer from the delusion that it is a permanent star in our political constellation?

That it is the repository of a non-transferable right to rule; that it alone has the proprietary rights to good governance - a beacon of hope for a nation of morons who would readily give it a bigger mandate than they did in 2014?

Such is the presumptiousness that PM Modi does not even talk of the two and a half years that remain of his tenure but of 2022 - the watershed moment when all the golden eggs of the BJP will hatch, including housing and power for all poor, double income for farmers - essentially a new unstoppable India.

Such is the condescending tone and the single minded obsession to chase numbers - skill training for 500 million people by 2022 - that the leadership does not care two hoots that empty promises would resonate across the nation in 2019 and could even ricochet on the party. 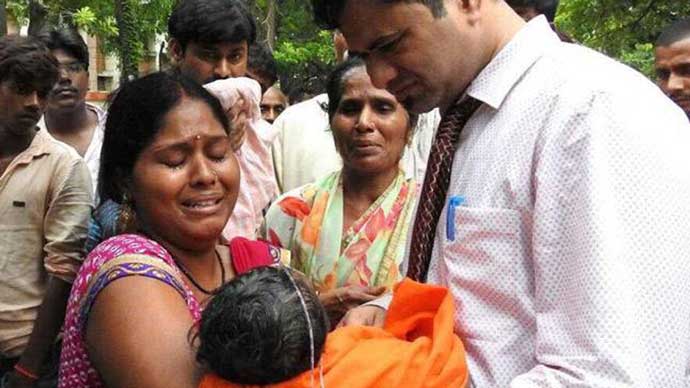 We perhaps had a glimpse of the BJP's disconnect with ground realities in Gorakhpur where red tape smothered 61 children with its fatal embrace! Photo: PTI

Possibly because Modi is convinced, and the party has internalised this view, that he has altered the fundamentals of our politics, polarising the population to the extreme. This, in turn, is expected to pave the way for a one man, single party, majoritarian rule for at least a decade - an impression that possibly gets reinforced every time Modi looks at his alter ego Amit Shah.

But such is the reluctance to look the nation in the eye, especially when Parliament is not in session, that PM Modi chooses to make his scripted cameo appearances only on the Internet. Or when he makes small talk with the nation on the Twitter, or in the orchestrated Man Ki Baat.

In a perception managed polity, that must be quite a feat for Mr Modi - his uncanny ability to "dodge" the media in a one to one encounter, possibly due to his punishing schedule - a performance that only Donald Trump can match given his penchant for governing through tweets.

Underlying this notion of being an exclusive preserve of good governance is an equally fallacious assumption that the ease of doing political business is facilitated if the same party has a government at the Centre and in the state. But this egregious argument, which undermines the true spirit of a federation, is essentially a thinly veiled excuse for establishing political hegemony in the states - either by own mandate and, where that is not possible, by forging post poll opportunistic alliances, "depriving" the other mainstream party of its mandate, or by inflicting itself on the population by other means.

The BJP leadership, of course, time and again, has deftly couched its power play in the simplistic reasoning that the Centre and the states need to work in tandem if fruits of development are to be shared. But these fruits of development are neither visible on the ground, nor are they ripe to be plucked; nor do the people feel they are active participants in the growth process. We perhaps had a glimpse of this disconnect in Gorakhpur where red tape smothered 61 children with its fatal embrace!

Instead of getting down to governance, the BJP has allowed itself to be distracted by frequent elections and by simply frittering away its energies in chasing a mirage of Congress-mukt Bharat. Such is its paranoid and sense of impending doom - just in case the Congress claws back into reckoning - that the BJP is engaged in a vitriolic campaign to consign the party to the history bin, or at least the archives, obliterating its narrative during the freedom struggle.

Trust Amit Shah, therefore, of all the persons, to decipher Gandhi and assert that the Congress party was a relic of the freedom struggle and that it should have been disbanded and mothballed after Independence.

Yet, there is a lurking irony here: because the entire BJP political construct also draws sustenance from its spiteful chant against the Nehru-Gandhi dynasty. Come to think of it, if you take this overhyped antagonism away, if you don't allow the spite to hold you in a thrall, the BJP loses much of its raison d'etre.

Not just that, most of the political baggage that the BJP lugs around with such chivalrous enthusiasm also carries the imprint of the Congress - be it the fetish for exerting a tenacious hold on the power structure, the incestuous embrace of crony capitalism, or the manipulation of the levers of public opinion.

Incidentally, such is the lack of scholastic tradition in the Right that it cannot even carve out a fresh ideological construct for prime minister Modi.

The hapless prime minister, too, despite his sneering contempt for the Nehru-Gandhi dynasty, ends up emulating either Panditji - while chasing his dreams abroad - or Indira, while resting on his laurels at home. In the interregnum, he is citing the likes of Ambedkar and Gandhi - reverentially recalling their contribution - more like a gasping Congressman clutching at straws in the wind.

Indira Gandhi, for instance, had surrounded herself with die hard loyalists - often picking faceless retainers and attendants as chief ministers, their blind allegiance to her being the overwhelming consideration. Indira's peculiar personalised kind of politics, which has a long lineage, left its offspring even in the Rashtrapati Bhavan.

PM Modi seems to suffer from a similar dependency and has merrily stuck to this template - at least to the extent it is expedient - to personally appoint nobody(s) as chief ministers of at least some of the BJP-ruled states.

Depriving the states of strong leaders has been at the root of the decline of the Congress. The rot had perhaps set in when anonymous party men would parachute into the party and were made chief ministers. Indira's successors had merrily stuck to this template, in the process alienating the party cadres and killing whatever little talent that existed.

The BJP does not tire of bragging that it is a party with a difference but in reality it is stuck in the same rut. To that extent, BJP will never be Congress-mukt!

Post your comment
#Modi government, #BJP, #Congress
The views and opinions expressed in this article are those of the authors and do not necessarily reflect the official policy or position of DailyO.in or the India Today Group. The writers are solely responsible for any claims arising out of the contents of this article.