It’s time minority leaders in the saffron party lift the veil of duplicity and double-dealing.

In a spectacular display of guts and gumption, five Dalit MPs from the BJP have lashed out against Prime Minister Narendra Modi and the party leadership accusing them of discrimination, negligence, barbarity and injustice.

Uttar Pradesh chief minister Yogi Adityanath may have trotted out several Dalit MPs in his favour a day ago, but the rebels have challenged and castigated the party forcefully and impressively. They have taken on the largely upper-caste party leadership, causing the latter embarrassment and discomfiture, even as the Dalit MPs lend support and sanction to the swell of Dalit pride and defiance that is blazing across the country.

Have the rebel Dalit MPs exposed Muslim leaders in the party, the other discriminated and hated community of Hindutva BJP, as being gutless and meek? 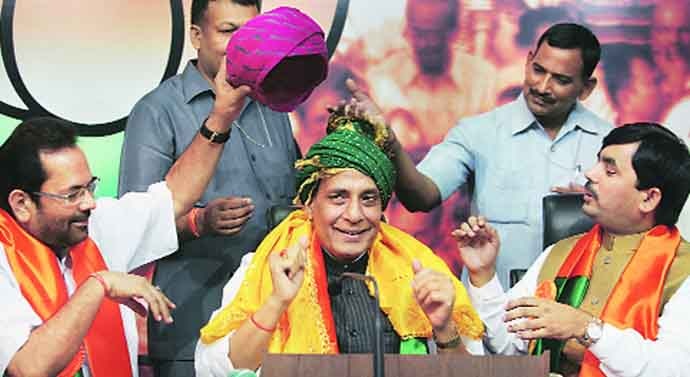 The roll call of Dalit MP rebels is impressive, four from caste-volatile Uttar Pradesh - Savitri Bai Phule, MP from Bahraich, who has been exploding on every available public platform; Chhote Lal Kharwar, MP from Robertsganj, who angrily wrote to Modi complaining he had been thrown out of Adityanath’s office; Ashok Dohre, MP from Etawah, who has accused Uttar Pradesh police of ritually harassing Dalits ever since last week’s Bharat bandh called by Dalit groups; and Yashwant Singh, MP from Nageen, who has written to Modi accusing his government of doing nothing for Dalit empowerment and development.

The latest to join them is Udit Raj, MP from Delhi, who has lamented that Dalits in many states (all ruled by the BJP) were being tortured and having false cases slapped on them. It must be said that except for Yashwant Singh and Udit Raj, who joined the BJP only in 2014, others like Phule has been with the party since 2005, while the rest began their political career with the BJP.

The Dalit rebel MPs have been variously accused of being shrewd and calculating, for sensing the mood of defiance and hostility among the community against the upper caste UP CM and the BJP leadership.

Political savvy apart, the rebel MPs have risked party censure and reprimand by listening to their conscience and hitting out because of the glaring discrimination of the people of their community – from the rampant and widespread violence, ritual insults, atrocities, public floggings and murderous assault, from Una in Gujarat to Saharanpur in Uttar Pradesh.

The last provocation was the dilution of the SC/ST Atrocities Act which was not challenged by the BJP, and was pushed to do so only after the eruption of Bharat bandh called by various Dalit organisations last week. Worse, the BJP state governments were seen to be lax in investigating the deaths of nine Dalits who were killed during the protests.

So, where does it leave the roll call of luminary BJP Muslim leaders who have mutely watched as Hindutva-affiliated goons began Modi’s tenure in 2014 with murderous assaults on the community, randomly picking on innocent members all over the country and killing them in the name of cow slaughter, love jihad, forced conversion, or hate crimes for just being a Muslim?

Leaders like Mukhtar Abbas Naqvi, MJ Akbar, who are ministers in the Modi government; Najma Heptullah is a governor, apart from Shahnawaz Hussain, minority cell member Asifa Khan, Shazia Ilmi, Ijaz Ilmi who are spokespersons for the party, have remained mum on atrocities against their community.

Apart from murderous attacks and institutional biases and discrimination, the BJP leaders have been heaping insults and choice abuses on the community – from party president Amit Shah’s hate speeches, calls for revenge and constant incitement of anti-Muslim sentiment in election campaigns, to Modi’s refusal, as PM, to condemn hate crimes against the community, to the rampant provocative speeches and verbal attacks of BJP leaders, all of which actively promotes Hindutva ultra-nationalism and communal rioting and murders.

Ministers like Naqvi have been more loyal than the Sangh when he publicly chided those who wanted to eat beef to go to Pakistan, while Akbar did a U-turn from asking his then PM Rajiv Gandhi to overturn Shah Bano verdict to appease the Muslim clergy, as opposed to pushing his present PM Modi’s Triple Talaq Bill despite reservation from women Islamic scholars and activists, Shazia Ilmi has been appointed independent director of Engineers India Ltd, a PSU; so has Asifa Khan been appointed on the board of Hindustan Petroleum Ltd.

Muslim BJP leaders have justified their allegiance to the Hindutva fold saying they have only contempt for the Congress and other "secular" parties for their "appeasement" of the community and using them as a "vote bank" whereas the BJP believes in "inclusive" politics.

Others who have joined the party recently say they were lured by Modi’s new avatar as "development man".

And even as a Shahnawaz Hussain justifies the refusal of tickets to Muslim candidates, from Gujarat to Uttar Pradesh, saying “winnability” is the sole criteria, no leader has asked why Muslims cannot be given tickets at election time when Hindu candidates have lost pretty majorly too.

So, will BJP Muslim leaders take the cudgel from Dalit leaders and finally challenge the hate campaign and attacks on the community?

Will they have the daring and spunk to crusade and lobby within the party organsiation for genuine inclusiveness, justice and empowerment of the hapless and disenfranchised within the community?

It’s time Muslim leaders in the BJP lift the veil of duplicity and double-dealing.

Post your comment
#Hindutva, #Muslims, #Dalit MPs, #BJP
The views and opinions expressed in this article are those of the authors and do not necessarily reflect the official policy or position of DailyO.in or the India Today Group. The writers are solely responsible for any claims arising out of the contents of this article.