Gunda-gardi under the garb of gau raksha

The Dalit fury in Gujarat against terror unleashed by the cow mafia is a creation of skewed saffron policy.

Finally, someone in Bharat sarkar has the guts to say "gunda-gardi" prevails in the name of "gau raksha".

Gujarat chief secretary GR Aloria told the media on July 21 that "there is hooliganism going on in the name of self-proclaimed Gau Raksha samitis", and the state needs to be more vigilant.

There has been no such admission by the governments in Haryana, Uttar Pradesh, Jharkhand, Rajasthan and other states where the cow is now rashtra-mata. 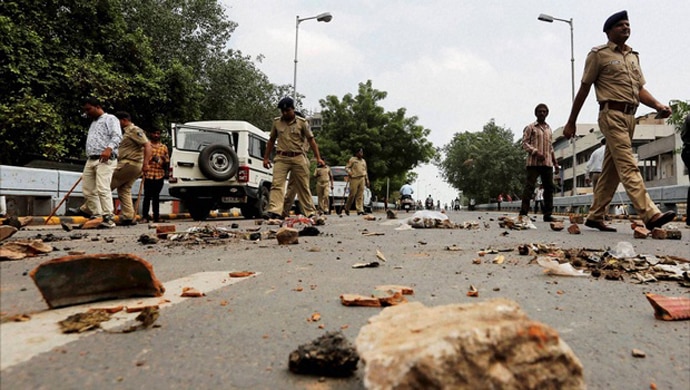 At Una, where four Dalit men were thrashed by Gau Raksha Dal.

For the chief ministers and the rest of the administrative machinery in these states, any gunda-gardi by Gau Rakshaks is simply about "our boys who get a little angry".

Except that these aren't "our boys". These are criminally-inclined men who derive sadistic pleasure by intimidating Dalits and Muslims. In the name of gau raksha, mafia are operating across many states.

Small-time politicians are now building their political careers over the protection of Cow Mata. This upper-caste fetish for the cow has no resonance with the millions of Indians who may belong to Scheduled Tribes (STs), Scheduled Castes (SCs), or minority groups.

The Dalit backlash against the brutal assault by gau rakshaks on a group of Dalits is alarming. The lower castes in Gujarat are seething with anger, making the state grind to a partial shutdown.

A total of 17 Dalit men have attempted suicide so far, protesting the flogging of a family for skinning a dead cow.

Mocking the upper caste fixation over cows, enraged Dalits are flinging carcasses of dead cows in front of government offices.

With aggressive posturing on protection of the Cow Mata, the BJP has created discontent and anger among social ranks where there was none.

Gau Rakshak groups, emboldened by the government's inaction and the tepid response to their lawlessness, are flourishing.

The Dalit fury seen in Gujarat has been building up in many states across the country. It was waiting to erupt.According to home minister Rajnath Singh, Prime Minister Narendra Modi is deeply sad over the violence by Gau Rakshaks in Gujarat.

Political groups that champion cow protection, like Vishwa Hindu Parishad (VHP) and Shiv Sena, have distanced themselves from these criminals. RSS has condemned the attack.

But these words of sympathy are too little, too late.

Since the swearing-in of the BJP government at the Centre in 2014, the party has built a muscular political narrative around the cow. Allies like Shiv Sena have been shrill cow protection champions for long.

Identification with cow protection has now been equated with nationalism. Along with Bharat Mata Ki Jai, all those who count themselves as Indians must also chant Cow Mata Ki Jai.

The perils of electoral politics are the only check the nation has against the cow protection mania acquiring a stranglehold on the society. While the BJP is aggressively wooing Dalits, these fault lines may hopefully make it rein in its "angry boys".

Congress MP Ahmed Patel presented this point succinctly when he referred to the forthcoming elections in Uttar Pradesh and Gujarat. "Jin logon ne humein sabak sikhaya hai, vo aapko bhi sabak sikha sakte hain (Those who have taught us a lesson can also teach you one)," he said, addressing the home minister.

While the cow is indeed vital to rural economy, low and mid-rung politicians are milking it to butter their political fortunes. Cow Mata has become a convenient excuse for upper caste hooligans and mafia to take the moral high ground and bully Dalits and Muslims.

State governments are reluctant to act against these acts of criminal lawlessness. The Dalit uprising in Gujarat against the terror unleashed by Gau Rakshaks is a creation of skewed saffron policy.

Dalits in other states are observing this rising.

Cutting across party lines, MPs from diverse parties have stated in Parliament that Dalit rage against cow vigilantism is like a ticking time bomb. These fuming social eruptions will happen elsewhere in the country if the BJP does not take heed.

The BJP knows that if Dalits and Muslims join ranks against it, it will be disastrous for the electoral fortunes of the saffron party.

The political, social and economic consequences of such blatant communal and caste polarisation triggered by the cattle fetish can be destructive for the nation.

The shockwaves of Dalit anger will not be limited to politics alone.

#BJP, #Cow protection, #Hindutva, #Dalits
The views and opinions expressed in this article are those of the authors and do not necessarily reflect the official policy or position of DailyO.in or the India Today Group. The writers are solely responsible for any claims arising out of the contents of this article.