Not by Saffron Pappus: Dear BJP, there is only one way you can woo the Malayali

Malayalis cannot relate to the collective consciousness shared by people further up the subcontinent. They are motivated by something entirely different.

It is befuddling that you, leaders of the BJP, managed not to win any Parliamentary seat in Kerala in the 2019 General Elections, even when most threads of the state's social and political fabric aligned in your favour.

You had a nationalistic wave sweeping across the country after the Pulwama attack, the polarising Sabarimala issue with the Pinarayi Vijayan government obligingly playing villain in many eyes, a warm approval from the Hindu community to the Vedic veneration pursued by the Modi sarkar, a genuine interest of your apparent development agenda from almost all demographics (although rather more mild after demonetisation) and both the Left Democratic Front (LDF) and the United Democratic Front (UDF) being the same old gunk with successive lacklustre performances at the state level. It didn't yield results: The BJP polarised the Sabarimala issue, and yet won no seats in the state. (Photo: PTI)

Going by recent statements from your party leadership about bringing Kerala into the fold, I suppose it is safe to assume that there was very much a plan to win the state over. It rankles, having to go back empty-handed, again. What was missing in your stratagems was a proper understanding of Kerala’s terrain, history and peoples — it is key to winning battles, as any conqueror out to rule the world would tell you.

So, yes, what you heard is right, Kerala is not anything like the rest of India. And no, it is not just because it is full of leftists, Christians and Muslims. Also not because it is filled, as sometimes said, with smug ‘literate fools’ — well, not entirely.

Malayalis, for one, cannot relate to the collective consciousness shared by peoples further up the subcontinent — there are no scars from a history of pillaging raiders, nor of northern or north western empires bent on conquest (Islamic or otherwise). There was no major invading force that crushed or cowed the general populace into subservience. For reasons we will not speculate on here, none of the empires seemed sustainably interested in pushing on through to the land of the coconuts.

What Kerala has instead is a 5,000-year history of trade relations with civilisations far across the seas. It was not all rosy, of course. There was the onset of socio-economic conflicts as overseas trade declined and caste oppression became all pervasive and concrete. But from geriatric conversations, one gathers that the kings kept changing but the life of the average Malayali remained pretty much the same.

A few elderly people remembered the period of British influence fondly — apparently, some say, they did more for the common man than the kings ever did. Easier access to greener pastures like education, for example.

The point simply is that while, in general, Malayalis are mildly proud of their religion, culture or heritage, they have never had reason to believe any of those were under threat.

Threat and oppression have always been economic. And all oppression, at some point or the other, has been overthrown successfully. The notion that Kerala was never actually subjected to a very powerful oppressor is something that the average Malayali is proud of still.

And yes, the aforementioned pluralism survived as well. To break it down to coarse essentials, that means different demographics to the rest of the country, without much animosity among its varied composition.

Add now the events of the 20th century — the emancipation of the oppressed classes, the literacy drive, widespread access to education and multiple sources of information. Combine the result of these ground-breaking events with thousands of years of experience with tradesmen trying to sell all sorts of shiny trinkets. Putting them all together, you get a voting populace that will scrutinise electoral candidates and the operational quality of their promises, other than their appeals to a particular community or tales of economic miracles elsewhere in the world.

An ornery populace that will remember BJP karyakartas for reportedly exhorting people not to send funds to a state stricken by a devastating natural calamity, and a Centre that seemed rather reluctant to even announce support.

A populace that will ask to see tangible evidence of promised prosperity. An irksome bunch, to be sure, but Indians and patriots — every one of them.

So dear BJP, if you want to win Kerala, it is easier now than ever.

You have the UDF that is getting by purely because you're a regional non-entity, a Left front that has well outlived its usefulness, and a hardworking, educated population restless for development and wealth — stymied by lack of political will and undue influence from religious groups.

Dear BJP, Kerala is ready to be wooed. Go in with candidates that work on the ground, earning respect and admiration for their efforts to improve quality of life for all.

You cannot hope to win with a bunch of saffron pappus. 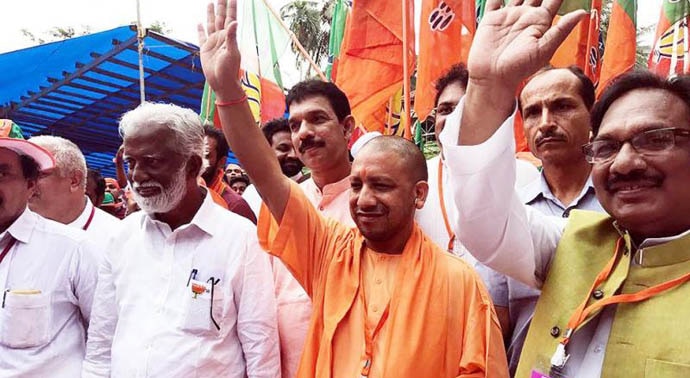 We don't use much saffon: The BJP cannot win Kerala by sending in hardcore Hindutva leaders. (Photo: PTI)

Support your activists with funds and massive (and of course, massively advertised) central government assistance, with substantial progress shown on projects. Rein in loose cannons who seek to antagonise or be derisory; Malayalis are rather thin-skinned — refer previous history.

Dear BJP, if you wish to win Kerala, do it the way Smriti Irani won Amethi.

Post your comment
#BJP, #Lok Sabha elections 2019, #Malayalis, #Kerala
The views and opinions expressed in this article are those of the authors and do not necessarily reflect the official policy or position of DailyO.in or the India Today Group. The writers are solely responsible for any claims arising out of the contents of this article.

A history buff and musician based in Hyderabad