If politicians have a superpower, it is definitely putting their foot in the mouth each and every time.

If politicians have a superpower, it is definitely talking out of their rectal cavity, or what we euphemistically call putting their feet in their too-loud-for-comfort-mouths. From insinuating the cause-effect relationship between noodles and rape, to failing to understand simple economics, Indian politicians, it would seem, smoke some rather great stuff that helps them churn out tonnes of drivel in person and on social media every day.

But the clear winner in this week’s episode of “stupidity par excellence” is India’s Union minister for law and justice and information technology, Ravi Shankar Prasad. Following the BJP trend of trying to push Digital India in every sphere, Prasad too has been tweeting about hardly anything else.

The Modi government’s digital revolution, though has ample merits, has been the focus of a lot of criticism, thanks to the shoddy implementation of the demonetisation drive and the slew of digital measures that the Niti Aayog has been trying to force upon the nation. One of the more appreciable measure was the launch of e-NAM, an online platform that proposes to integrate 585 regulated wholesale markets or agriculture produce market committees (APMCs).

Admirable and progressive the measure may be, but the constant pressure of having to replug the success of digitisation, in order to negate the travesty that demonetisation has been, may perhaps be taking a toll on the ministers. And that’s where Ravi Shankar Prasad comes in. Prasad tweeted a photo that claimed that 1.13 lakh tonnes of agricultural produce worth Rs 6.13 lakh crore have been transacted on the e-NAM platform. 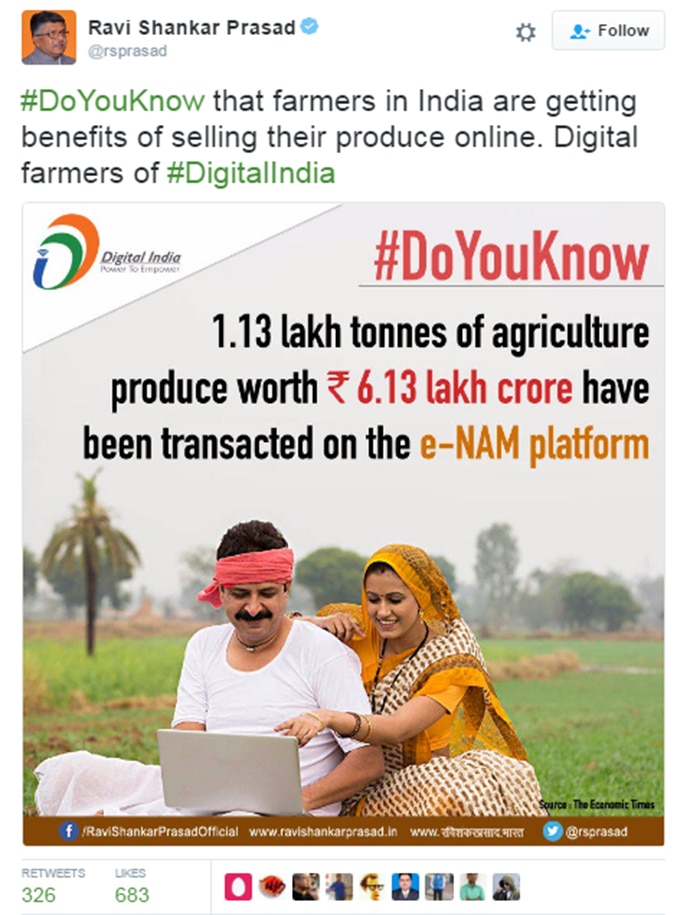 Screengrab of the tweet (since deleted) by Ravi Shankar Prasad.

Before you go “whoa!”, if you do a simple calculation that figure shows that on an average, one kilogram of said agricultural produce would be worth Rs 54,247. For example, according to Prasad, the humble potato would be worth Rs 54,247 a kilo. Yes. To put that into perspective, the price of silver is approximately Rs 45,000 per kg.

Of course, as it happens, the minister has since deleted his erroneous tweet, but not before Twitter politely asked him to learn how to use a calculator.

@rsprasad Please get people in your ministry to use a calculator, sir.

Finally @rsprasad deleted this tweet 👇. Hope next time he will use original theme and calculator.. 😂😅😆 pic.twitter.com/BrpPP0V07W

And there were those who wanted to understand if the minister was perhaps referring to marijuana, which at least would justify the price.

This observation is particularly insightful, considering just how complicit WhatsApp has been with spreading misinformation.

This is what happens when you believe in WhatsApp forward msgs. https://t.co/eoLzOlGPb1

#DoYouKnow abt this joke of the new yearI thought @rsprasad would at least offer an apology for misinforming the nation https://t.co/eZu14kokhN

Prasad later provided a clarification, and tweeted a photo with the “corrected” figures. According to him: “So far 31.13 lakh tonnes of agriculture produce of Rs.6130 crore have been transacted on e-NAM”. While that figure now sounds realistic - the average is something around Rs 19 per kilogram – the minister is likely to now think twice before tweeting stats.

Corrections in eNAM growth figures! So far 31.13lakh tonnes of agriculture produce of Rs.6130Cr. have been transacted on eNAM. #DigitalIndia pic.twitter.com/qRc2E7xD34

Ah, the magic of social media.

Also read - 5 foods that should be banned in India