Why BJP's final frontiers Bengal and Kerala will be a long, bloody battle

The entry in both states is hardly going to be easy or bloodless, as we are already witnessing.

They tapped on Rajesh’s shoulder as he was picking up a packet of milk from a local shop, as he always did on his way home from Rashtriya Swayamsevak Sangh’s evening shakha or gathering.

By the time he was taken to the hospital in Thiruvananthapuram, his body had 89 cuts, and one of his hands was chopped off. He was not alive for long, but long enough to identify his killers, allegedly Left workers.

Earlier in July, RSS volunteer Kartik Ghosh was repeatedly stabbed to death by a mob after riots broke out in Basirhat over a teenager’s Facebook post on Islam. Thiruvananthapuram is 2,500km from Basirhat, but torrents of history have converged to create a uniquely bloody conflict in two states which have a lot in common.

Bengal and Kerala take pride in their intellectual achievements, love football, and have a long and successful history of Leftist politics. Kerala is still ruled by the Left Front. While Mamata Banerjee’s TMC has decimated the Left in Bengal, her politics in many ways mirrors the enemy she fought for decades to overthrow.

Both regimes use cadres to establish a complete stranglehold on society. Both states have seen the most brutal, gratuitous violence as a widely used political tool. In these seemingly impregnable forts enters the BJP.

After storming to power at the Centre and winning in state after state, Kerala and Bengal remain the last frontiers of Modi’s BJP and its ideological mentor, the RSS. The entry in both states is hardly going to be easy or bloodless, as we are already witnessing. 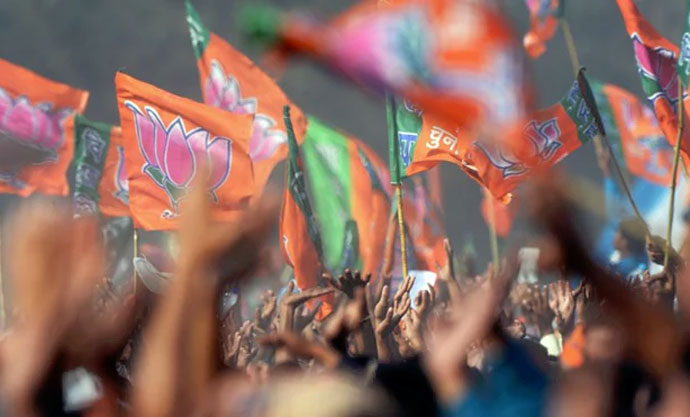 Modi and Amit Shah’s BJP is a different animal. It doesn’t give up.

But Modi and Amit Shah’s BJP is a different animal. It doesn’t give up.

The Vishwa Hindu Parishad (VHP) in Bengal started an online membership drive 10 days ago on www.vhpbengal.org and on Twitter, Facebook and YouTube. To its utter surprise, it has already got more than 3,200 membership requests.

Of those, 1,200 of them have specifically asked to join the more aggressive Bajrang Dal, while 400 women have sought membership of the Durga Vahini. Interestingly, a large number of the new memberships are coming from border districts like South and North 24 Paraganas, Nadia and Murshidabad.

These are places where there has been mass-scale illegal immigration from Bangladesh, the demography has changed and Muslims are in majority or could surpass Hindu populations in the future.

The VHP and Bajrang Dal are planning massive Janmasthami celebrations in each block. They will also launch their campaign to ban cow slaughter in Bengal on the occasion and culminate it during Durga Puja in October.

Sangh plans to rekindle the great Hindu spiritual traditions in Bengal and Kerala, pushed underground by decades of Communist onslaught. While Bengal is the land of Chaitanya Mahaprabhu, Bama Khepa, Ramkrishna Paramhans, Swami Vivekananda and Sri Aurobindo, Kerala has been enriched by some of our greatest saints like Adi Shankaracharya, Sri Narayana Guru, Sri Chattambi Swamikal and Swami Chinmayananda.

There have been 14 murders of RSS workers in the last 13 months. The Left’s nervousness and desperation is not unfounded. Saffron forces have been gaining mainly at the cost of the Left, especially in the south Kerala belt stretching from Kochi to Ernakulam to Trivandrum.

Although Guru Golwalkar’s programme was attacked in 1948 and the first political murder of a Sangh worker dates back to 1969, the migration from the Left to the RSS started in rural Kerala 1977 onwards. Many in the CPI(M) cadre, disappointed with the party’s stand on Emergency, started changing camps.

This also triggered one of the most violent phases, with the Left deciding to stop these desertions at any cost. Kerala, interestingly, has the highest number of RSS shakhas in India: 5,500. But this didn’t translate into votes so far.

Since the Congress is seen as a Christian-Muslim party, the Sangh cadre tactically voted for the Left in the elections. However, that is changing.

In the last Lok Sabha and Assembly elections in the state, the BJP’s vote share has gone up from 7-9 per cent traditionally to 16 per cent. Left, which was also the voice of the Hindus in the state, has decided to strengthen its Muslim base. Today, the SFI secretary to the Kannur district president is Muslim.

Out of 74 youths arrested nationwide by NIA for ISIS links, the highest, 24, is from Kerala. They have been arrested from the Left’s "party villages", Stalinist townships where every resident is a cadre, and even the police fear to venture inside to arrest criminals.

Ironically, this has created tremendous unrest among the Left’s traditional votebank and the saffron camp is gaining. While the BJP-RSS is showing a fair bit of deftness in making inroads, the battles for Bengal and Kerala are going to be long, violent ones.

In both places, blood begins where political finesse ends.

Also read: How the Right-biased media is trying to paint Kerala as a communal warzone

#BJP-RSS, #West Bengal, #Kerala
The views and opinions expressed in this article are those of the authors and do not necessarily reflect the official policy or position of DailyO.in or the India Today Group. The writers are solely responsible for any claims arising out of the contents of this article.