Leave aside Mamata, BJP won't even unseat Left in Bengal

The saffron party has to wait for another five years, at least, to serve as opposition to Didi.

BJP recorded its best ever performance in Lok Sabha polls in May 2014, bagging two seats in West Bengal and tripling its vote share to 17 per cent. This performance was significant because BJP's seat tally was similar to the Left front's, which ruled the state for 34 continuous years, and the saffron party's vote share was higher than Congress'. It was leading in 24 assembly segments in a state where it had failed to open its account.

The decline of the Left nationally in the polls raised hopes among BJP supporters that it could emerge as the main Opposition to Mamata Banerjee in the 2016 state polls.

Absence of fresh faces in the Left front and the Modi factor led to the super performance (20 per cent respondents in a CSDS survey rooted for Modi as PM compared to 17 per cent, who preferred Mamata). BJP made major inroads among the upper caste voters. Modi's impact was also prominent among the youth, especially first-time voters and graduates. BJP's vote share was higher than the Left front's - among the upper caste and graduates. 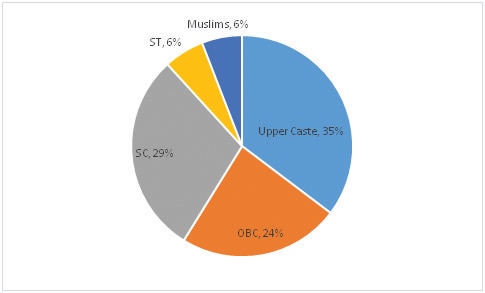 Mamata and the Left's nervousness was summed up aptly by Jyoti Prasad Chatterjee and Supriyo Basu in their article in The Hindu, "West Bengal: Mamata holds onto her fortress (July 1, 2014)."

"If BJP emerges as the main opposition, it will change the nature of politics in the State; it would add to the national stature of the BJP but above all, it would mean a serious challenge to the long time Left citadel in the country."

BJP has made a strong pitch for the state

Riding on its LS performance, BJP opened its account in West Bengal Assembly by winning the Basirhat Dakshin by-poll in September 2014.

In line with the "Congress mukt Bharat" call nationally, it has extended the call of "Trinamool mukt Bengal" in the poll-bound state and made a strong pitch for getting a simple majority on its own.

It has appointed RSS man Dilip Ghosh as the state's new BJP chief and made Rupa Ganguly (of Draupadi fame) the party's women's wing president to take on Mamata and compete for the woman vote bank (that makes up 48 per cent population).

Mamata is nervous. If BJP takes a section of its educated, young, liberal class voters, it could impact its performance in the state elections, which will be a close contest as Congress and the Left have formed a mahagathbandhan against her. The Left is nervous too and fighting for survival in its citadel. If BJP gets enough votes to usurp the second slot from the Communist party in Bengal, it will be a big setback and embarrassment for the Left forces nationally.

What will impact BJP's performance in 2016 polls

In the West Bengal municipal elections held in April 2015, the BJP ceded some ground it had captured during Lok Sabha polls and failed to open its account in the 91 municipal bodies across the state. It did, however, manage to win seven seats in Kolkata Municipal Corporation - up from its earlier tally of three, in line with its strong urban presence.

As evident from the graph, the party has fewer members going for polls in West Bengal. The national average for the party is 8.2 per cent and in West Bengal, the party membership is below this average (4.6 per cent).

Membership of BJP in various states 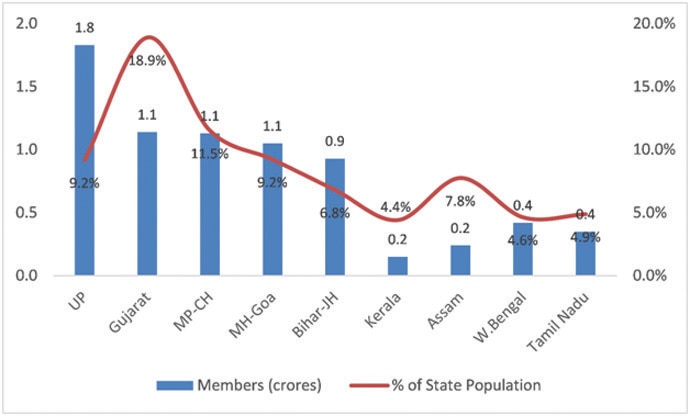 The party doesn't have tall leaders of the stature of Mamata or Suryakant Mishra in Bengal. As has been clear with Delhi and Bihar verdicts, strong local leadership is increasingly becoming a deciding factor in the state polls (for example, Arvind Kejriwal and Nitish). As per opinion polls, its state president and women's wing head are the preferred candidates of less than five per cent voters.

The party has inducted Chandra Kumar Bose, grandnephew of Netaji to take on Mamata in her constituency, but Bose is new to politics and will take some time to settle in.

4. Limited appeal among the urban and educated class

The BJP's appeal is limited to pockets of urban Bengal (in and around Kolkata) and Darjeeling owing to its support for the Gorkha movement. 72 per cent of the population lives in Rural Bengal, where BJP lags behind the Trinamool and the Left.

It is also backed by the educated class (graduates and post-graduates), which is again a miniscule part of population (less than five per cent is the national average). It has been able to connect with the urban youth as it connects with their aspirations of development and jobs.

Because of the Left's dominance for years', West Bengal witnesses a class-based, and not caste-based politics. Caste doesn't play a major role, unlike states of the Hindi heartland. BJP, which is predominantly a Right of Centre party, has struggled in the state due to the lack of adjustment with this factor. Further, Muslims account for 27 per cent of the state population and can influence close to 75 seats. The recent exit of party's minority cell is a another setback for the party.

Similarly, it was down to 83.6 percent in the recently concluded Bihar elections.

As state elections are fought on local issues, such loss of vote share is normal.

BJP's vote share and performance in the Lok Sabha polls got a push in Bengal due to the Modi factor. This is likely to be absent in the state polls. The electorate has made a clear distinction between state and national elections going by the recent poll trend and this means a two to five per cent loss in vote share.

BJP is still seen as a Hindi heartland party. Its struggle in southern and north eastern India is testimony to this fact. Bengali is the second most spoken language in India (eight per cent according to 2001 census) and the BJP lacks any national-level tall leader from the state (except for Siddharth Nath Singh, who also lacks mass base).

The grand alliance where the Left is expected to contest close to 200 seats and the Congress some 75 seats is also a setback for the BJP. It would ensure that the anti-Mamata votes are consolidated in the favour of mahagathbandhan. The anti-Mamata electorate would like to vote for a party or alliance that can overthrow Mamata, which BJP is not seen as being confident of.

To sum up, BJP still has a long way to go in the state. 2016, in many ways, is a build up to the 2021 state polls. It is time to build a strong cadre base and presence across all seats. A decent performance and continued good work in the state for the next five years would help the party pitch itself stronger for 2021.

Most opinion polls put BJP's estimate in single digits, which is far better than nil, but not strong enough to dislodge the Left from its number two spot. So, in effect, it has to wait for another five years at least for a shot at government formation or to serve as a major opposition to Didi.

#BJP, #Mamata Banerjee, #West Bengal polls
The views and opinions expressed in this article are those of the authors and do not necessarily reflect the official policy or position of DailyO.in or the India Today Group. The writers are solely responsible for any claims arising out of the contents of this article.