What is Boris Johnson doing in Ahmedabad?

From trade deals, to defence and more, take a look at what the two-day visit of British PM Boris Johnson to India means.

British Prime Minister Boris Johnson arrived at Ahmedabad airport in Gujarat on Thursday morning to kick off his two-day visit to India. Johnson is the first British PM to visit Gujarat.

He will meet with Prime Minister Narendra Modi on Friday, where they are expected to discuss various issues. The arrival of the UK PM is important in terms of business; mainly free trade, the energy sector and defence.

It’s fantastic to be in India, the world’s largest democracy.I see vast possibilities for what our great nations can achieve together. Our powerhouse partnership is delivering jobs, growth and opportunity. I look forward to strengthening this partnership in the coming days. pic.twitter.com/bx0iXHDYov

The export deals also include science and tech collaborations, including a digital health partnership and a joint investment fund for Indian deep-tech and AI start-ups, supported by both the governments.

“As I arrive in India today, I see vast possibilities for what our two great nations can achieve together. From next-generation 5G telecoms and AI to new partnerships in health research and renewable energy — the UK and India are leading the world,” Johnson was quoted as saying by the British High Commission.

Johnson was greeted by Gujarat CM Bhupendra Patel and Governor Acharya Devvrat at the airport.

He visited Sabarmati Ashram in Ahmedabad and tried his hand at spinning the charkha.

In the visitors' book at the ashram, Johnson wrote: "It is an immense privilege to come to the ashram of this extraordinary man and to understand how he mobilised such simple principles of truth and non-violence to change the world for the better." He will also be holding a closed-door meeting with a “leading businessman from the state”, PTI reported.

Johnson, along with Gujarat CM Bhupendra Patel visited the JCB factory at Halol GIDC, Panchmahal in Gujarat. The British PM climbed onto a JCB at the new factory and waved to the media. JCB, a construction equipment manufacturing firm, is known for selling bulldozers.

He will spend his whole day in Gujarat and later in the evening he will leave for Delhi.

Johnson has indicated that he was ready to offer more visas to India in return for this year, clinching a free-trade deal that could boost annual bilateral trade by billions of pounds, said a Reuters report.

While speaking on the plane on his way to India, Johnson was quoted as saying, "I have always been in favour of talented people coming to this country." Johnson told reporters, "We are short to the tune of hundreds of thousands of people in our economy and we need to have a progressive approach and we will." 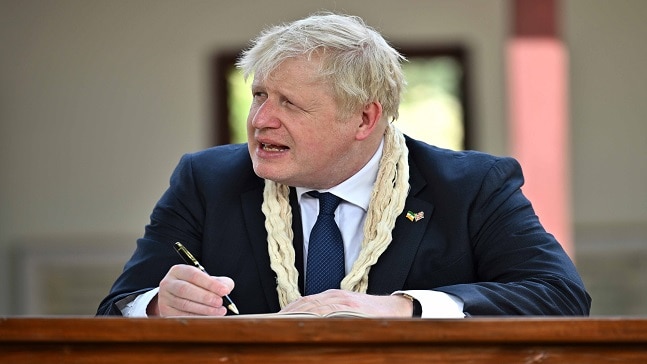 During his meeting with PM Modi on Friday, the British PM is expected to offer to help India cut reliance on Russian oil and defence equipment, reported Reuters. India had abstained in a United Nations vote condemning the Ukraine invasion and had not imposed sanctions on Moscow.

However, Johnson has said that he will not lecture Modi on the matter, his spokesperson said.

The British High Commission said that PM Johnson's talks with PM Modi will be mostly on UK-India free trade agreement and defence.

This week I’ll be travelling to India, to deepen the long-term partnership between our countries. As we face threats to our peace and prosperity from autocratic states, it is vital that democracies and friends stick together. 1/3 pic.twitter.com/Dw1yZQq6UG

"As he moves on to New Delhi on Friday, the PM will also use this week’s visit to drive progress in negotiations on the landmark UK-India free trade agreement, which is expected to help double our trade and investment by 2030," the High Commission said. UK-India Enhanced Trade Partnership was launched by both the prime ministers last year.

In the meeting, the two prime ministers will also review the implementation of the Roadmap 2030 and set their vision for further intensifying cooperation across the full spectrum of bilateral ties, the Indian Ministry of External Affairs said.

#Modi, #Ahmedabad, #Indiaukties, #Borisjohnson
The views and opinions expressed in this article are those of the authors and do not necessarily reflect the official policy or position of DailyO.in or the India Today Group. The writers are solely responsible for any claims arising out of the contents of this article.