Breastfeeding is a lifeline that fails to get its due

It guards against malnutrition and stunting that often begin right after birth.

India is home to a third of the world's malnourished children. While malnutrition begins in the womb itself, with a third of babies born low birth weight - early and exclusive breastfeeding for the first six months can protect children from falling off the curve.

As many of us would recollect, one of the most popular dialogues in Hindi action movies a la 1980s was "Maa ka doodh piya hai to saamne aa!" Implicit in the popularity of this dialogue was a widespread societal recognition that breast milk conferred unmatched strength - even virility, in the case of men. Surely, we as a culture realised the value of breast milk long before modern science began discovering its magical benefits. 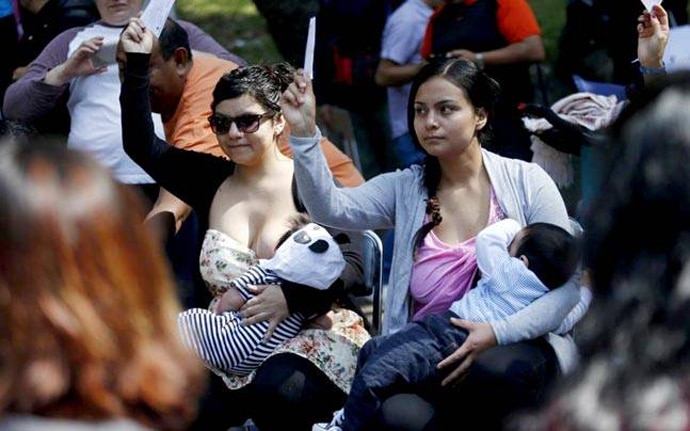 We continue to learn more and be humbled by the miracles of breastfeeding.

With ever growing scientific interest into breastfeeding over the last three decades, we now know a lot about the complex importance of breastfeeding for babies as well as mothers. Breastfeeding reduces the risk of infections in children, improves their intelligence, and protects against obesity and diabetes over their life course.

It is even more fascinating to learn about the mechanisms through which breast milk leads to these amazing benefits. Breast milk is not only a source of nutrition - breastfeeding integrates food for the body, mind and soul. Compared to substitutes, which are essentially "dead" food, breast milk is a living tissue - a source of personalised nutrition and medicine that continuously responds to meet the dynamic needs of the infant.

Breast milk contains all the nutrients a baby needs and alters its composition and quantity in response to the needs of the growing infant. When an infant stays in close contact with the mother, the mother is exposed to the same bacteria and pathogens as the baby, and is able to dynamically provide the antibodies to fight these infections through her breast milk. Colostrum, the first secretion from the mother's breast from the time of birth till the first two-three days, is packed with antibodies that provide the vulnerable infant with its first immunisation.

The close contact and bonding between mother and baby facilitated through breastfeeding provides a great opportunity for playful interaction that stimulates the baby's brain and mitigates the stresses of an unknown environment. We continue to learn more and be humbled by the miracles of breastfeeding.

So how much does our cultural acceptance of breastfeeding translate into improved breastfeeding practices? As a matter of fact, India does have among the highest proportion of children who are breastfed for longer than 12 months. Unfortunately however, we don't fare as well in terms of feeding of colostrum, and early initiation and exclusivity of breastfeeding until six months -the most critical indicators for ensuring improved survival and well-being of infants.

In Uttar Pradesh, which loses 3,80,000 children under the age of five each year to preventable causes, less than a quarter of babies are breastfed within the first hour and nearly 40 per cent of children, who are less than five months of age, are not exclusively breastfed. Discarding colostrum is sadly a near universal practice.

Despite its significant advantages, why are our breastfeeding rates and practices so poor? Breastfeeding is a challenge among women across all socio-economic groups for different reasons. Contrary to popular belief, lack of awareness is not the only reason for poor breastfeeding practices.

The two most common reasons cited by mothers for not being able to exclusively breastfeed for the recommended six-month duration are a perception of insufficient milk production and absence of a supportive environment. While the former is a knowledge issue, the latter is systemic and beyond the mother's control.

Most public health programming and behaviour change communication messages are currently targeted at mothers. When we put the entire onus of complying with breastfeeding recommendations on mothers, we make an erroneous assumption that mothers have the freedom to make an informed choice - they often don't.

Rural mothers have even tougher choices and poor support systems - each day of lost wages counts, and women are often forced to return to work very soon after delivering - be it on the fields, or taking care of their older children and other family members. The breast milk substitute that many non-exclusively fed rural infants get is not even infant formula milk - it is cheap skimmed milk powder. Malnutrition and stunting often begin right after birth.

What then is needed to improve breastfeeding behaviours? First of all, a supportive and empathetic family, community and society that accepts and supports breastfeeding as an integral and essential part of being human, and as the inalienable right of every infant. Conducive workplace policies such as longer maternity leave, flexible timings for nursing mothers and a dedicated breastfeeding room can make a huge difference.

Government policies need to expand beyond just behaviour change communication messages to include creative solutions to foster an enabling environment for breastfeeding. Interventions that have worked elsewhere include baby-friendly birthing facilities with lactation support, regulations to restrict marketing of commercial infant formula milk, breastfeeding support groups, to name a few.

Breastfeeding can lay the foundation of a stronger, healthier, smarter and more empathetic society. While breast milk is arguably, the right of every newborn, mothers face real challenges in order to breastfeed exclusively for the first six months and need to be supported.

Ensuring breastfeeding therefore, is not just the responsibility of mothers, but of society as a whole.

#National Nutrition Week, #Pregnancy, #Malnutrition, #Breastfeeding
The views and opinions expressed in this article are those of the authors and do not necessarily reflect the official policy or position of DailyO.in or the India Today Group. The writers are solely responsible for any claims arising out of the contents of this article.

Co-founder of Community Empowerment Lab and leads its design and analysis group. With a research background in machine learning and bioinformatics, Aarti is currently applying herself to the science of behavior change management towards the survival of mothers and newborns.