Even as Britain has signalled that it wants the Brexit turmoil to end, the UK’s political future remains a matter of contestation.

The results on Friday showed that it was another Brexit election in the UK. Tired of the seemingly never-ending drama featuring Britain and the European Union (EU), the British electorate decided to give the incumbent, Boris Johnson, another chance to deliver on Brexit.

This time the Conservatives have a solid mandate. Brexit has recast the political map of Britain in ways few had imagined and the hope is that the turmoil of the past three years can be put aside for a more stable future. This was the UK’s third general election in less than five years. What started off as an internecine Conservative Party struggle — which then Prime Minister David Cameron tried to lay to rest by calling for a referendum — has seen two PMs depart and the third one seeking a fresh mandate from the people of Britain to finish off what his predecessor Theresa May started all the way back in 2016. 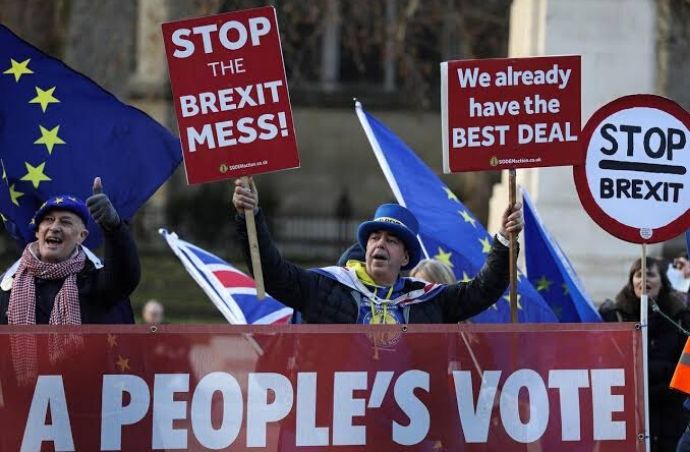 Brexit has recast the political map of Britain in ways few had imagined. (Photo: Reuters)

May had also called for polls in 2017 hoping for a larger mandate. Instead, the Party lost seats forcing her to enter into a confidence and supply arrangement with the Democratic Unionist Party (DUP) to support a minority government. After the British Parliament rejected her Brexit withdrawal agreements thrice, May resigned and Johnson took over. He categorically said that he would take Britain out of the EU by October 31, deal or no deal. However, the parliamentary logjam prompted Johnson to call for polls.

It turned out to be a big night for the Conservatives as it won an overall majority of 78 in the House of Commons. Johnson immediately declared that this victory would give him a mandate to “get Brexit done” by next month. Meanwhile, it was a disaster for the Labour Party which saw its traditional strongholds falling in its worst performance since World War II. It has been wiped out from the British heartland resulting in Corbyn’s decision to step aside as the party leader before the next election, a decision many in his party would like to be expedited.

The Liberal Democrats suffered the worst as even their leader, Jo Swinson, lost her seat. Meanwhile, the Scottish Nationalists have swept Scotland. The two main contenders for the top job — Corbyn and Johnson — came with their own set of problems and baggage. One British commentator called it an “appalling choice” between a “totalitarian” and “compulsive liar.” The focus on the two candidates was more like a US-style Presidential election than the traditional British parliamentary election.

Johnson desperately sought these elections, haranguing his Labour opponent about not agreeing for one. He focused on making the polls only about Brexit and promised a process-weary British public that if he secured a strong mandate, he would deliver the outcome they had voted for in June 2016 — Britain’s exit from the EU.

However, throughout the campaign, Johnson struggled with questions about his trustworthiness. He is widely considered too clever by half, ready to build and destroy relationships for his own ambitions. In an election which was all about the British people’s connect with the nation’s body politic, Johnson’s antics and behaviour often led to more questions than comfort.

Yet, opinion polls consistently predicted a strong Conservative lead. In this, the Tories got help from Corbyn, who has simply been a disaster for the Labour Party. He has lacked a clear line on Brexit for years now, shifting positions depending on immediate needs.

Not surprisingly, he wanted to shift the political conversation away from Brexit. So, he promised one of the most left-leaning platforms ever offered by the Labour Party in recent memory. Corbyn promised a sweeping programme of nationalisation which would include the railways, electricity distribution, the Royal Mail, water utilities and even the broadband.

Ultimately, this was a Brexit election. The British electorate had to choose between Johnson, who promised to deliver Brexit by January 31, 2020 if he won a majority, and Corbyn who wanted to negotiate a new Brexit deal and then grant a new EU referendum. This was their opportunity to break the logjam and give a new direction to British polity. While it is likely that Brexit would be expedited now, other difficult questions might raise their head. After the results, Scottish National Party leader and Scotland First Minister, Nicola Sturgeon, underlined that Scotland had sent a “very clear message” that it did not want a Boris Johnson Conservative government and the PM did not have a mandate to take Scotland out of the EU. It was also a “strong endorsement” for Scotland having a choice over its own future in another independence referendum, she added.

So, even as the British public has sent out a signal that it wants the Brexit turmoil to end, and end fast, the UK’s political future remains a matter of contestation. Johnson may have won big, but his travails are far from over as new challenges mount.

Also read: Why Brexit is bad news for the UK and the rest of the world

Post your comment
#Theresa May, #Scotland, #UK, #European Union
The views and opinions expressed in this article are those of the authors and do not necessarily reflect the official policy or position of DailyO.in or the India Today Group. The writers are solely responsible for any claims arising out of the contents of this article.