Communities formed from immigration are becoming enforcers in their host countries of the religious and cultural codes of the societies they had left behind.

As the mobs on the streets of Pakistan baying for Asiya Bibi’s blood grow larger, the calls for her assassination louder, it has become increasingly clear that she would surely be lynched by the citizens of her own country. The most credible route for her survival would be asylum in a secular foreign state.

As the case makes headlines all around the world, many countries should have offered her suo motu asylum. The least they could have done was allowed her refuge if she so requested. Britain, however, has denied her asylum for ‘security reasons’. As she stays in hiding in Pakistan until the legal process of her battles with the state are over, Britain's decision to deny her refuge would surely have added to her fears of an imminent death, as if being jailed in solitary confinement for almost a decade wasn’t awful enough. After staying jailed in solitary confinement for almost a decade, Asiya Bibi is now forced to live in hiding. (Photo: Reuters)

Ravaged by the experience of World War II, Britain was one of the main countries that drafted the Universal Declaration of Human Rights in the United Nations General Assembly. The Declaration set out, for the first time in history, rights that were fundamental and inalienable, that had to be universally protected for every human being. They included the rights to freedom and justice. Article 14 of the document declared Asylum from Persecution a right.

Britain, however, has decided to turn its back on the very cause of human rights and dignity that it once championed. By doing so, not only has the country gone back on its own promise, it has set a deadly precedent — communities formed from immigration becoming enforcers in their host countries of the religious and cultural codes of the societies they had left behind.

Globalisation, the free movement of goods, people and ideas, has proved to be a boon to the world in previously unimaginable ways. From trade to skills, university students to tourists, everything around us is moving globally like never before. This also includes migration into free democracies, which has over time led to large religious and cultural diasporas in these countries, where their vote makes them significant political pressure groups within the broader cultural paradigms of the countries they’re in.

In most cases, the second- or third-generation migrant groups adopt the overall ethos of the country their ancestors moved into. But if this cultural integration does not happen, every Western democracy will have a crisis of values centered around immigration and diversity.

Diversity is rightly celebrated in democracies around the world, but an absolute refusal by immigrant communities to adhere to the basic cultural tenants of the countries they are in could mean the end of asylum system itself. 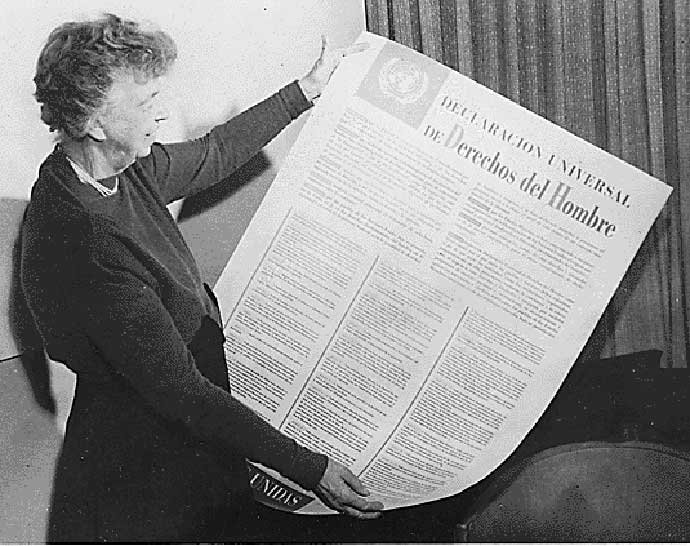 Britain was one of the main countries that drafted the Universal Declaration of Human Rights. Today, it has gone back on its promise. (Photo: Wikimedia Commons)

Countries that offer safety and freedom to asylum seekers are also the countries that have taken in extremely large numbers of immigrants. Unites States of America boasts of 44 million immigrants, 15% of its population. More than 1 in 5 Canadians were born abroad, with 22.3% population belonging to visible minorities. The figure is 19% for France. In 2004, the number of people who became naturalised citizens of Britain formed 12% of its population, majority of whom came from India, Pakistan, Bangladesh, and China.

With religious persecution of minorities on the rise in China, Pakistan and Bangladesh, the minorities of these countries often find themselves applying from asylum in the same countries that host huge populations from their home countries. When the persecution asylum seekers are fleeing is from their own governments, countries like Britain are guarantees of safe refuge. But what happens if it is religious and societal persecution they must flee from? Britain refusing asylum to Asiya Bibi has laid it bare.

Were Pakistani Muslims in Britain as well integrated as Britain’s own health and vitality requires, Asiya Bibi would be living in the UK now. But as it is, the religious and social attitudes that she needs to escape from in Pakistan, are now present in Britain too, to such an extent that Britain fears giving her asylum lest Pakistani Muslims do about Asiya Bibi in Britain what they’ve been doing in Pakistan. As immigration continues and expectation of integration continues to be frowned upon in the name of multiculturalism, eventually, there may be no place left for religiously and socially persecuted people to find asylum. This in the long run would destroy any form of dissent — political, religious, ideological — because the dissenters would have nowhere left to go.

This will be fatal to the cause of freedom, free speech, and the socio-political development of the countries most in need of those things. In such a world, Hussain Haqqani, who lives in exile in the US, could not write a book that might force Pakistanis to reconsider the condition and future of their countries. Edward Snowden would not be able force the US to look at its state surveillance system. Ayan Hirsi Ali, VS Naipaul, and Salman Rusdhie would be silent. Dissenters in asylum push their own countries and societies away from oppression and absolutism. Britain, by denying refuge to Asiya Bibi, has helped no one but extremist elements like Khadim Rizvi and the mobs baying for her blood.

From the Komagata Maru incident which Indians are familiar with, to the recent apology by Justin Trudeau to the Jews for having sent back a ship of refugees seeking asylum in 1939, we see the humane asylum system that took decades to establish. 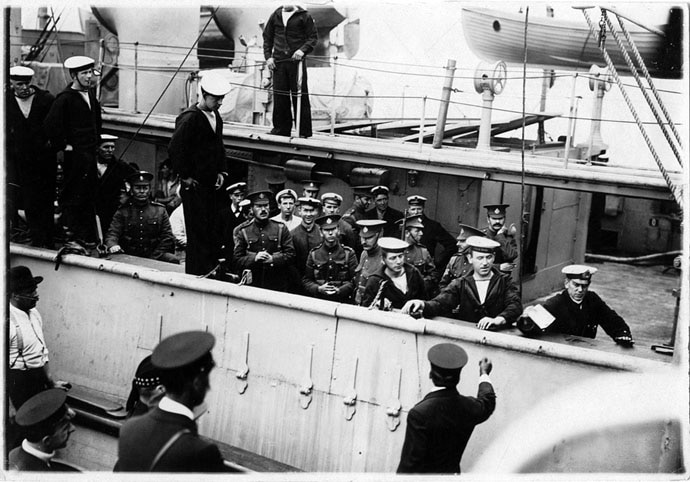 In 1914, Canada turned a group of asylum seekers back to Calcutta. 20 of them died after the British fired at them upon their return. (Photo: Wikimedia Commons)

This should set alarm bells ringing for every freedom and democracy minded person in the world.

Britain’s betrayal of Asiya Bibi is both a tacit acknowledgement that it is at threat from extremist elements, and a surrender to them. It is a recognition of the political might of these forces of intolerance within Britain, and it is an abdication of the responsibility of the British State to ensure that the British society is free and safe, for Britons and for those who need refuge.

No wonder Britain voted for exit from the European Union (Brexit). It’s a call by Britons to retake control of their immigration and social policy.

The United Kingdom’s denial to Asiya is only going to strengthen the political Right’s anti-immigration stand in all democratic countries. It will feed the Far Right’s intense hostility to Muslims. All Muslims, whatever their views about Asiya Bibi, would be looked at as extremists, a threat to citizens, other asylum seekers, and liberal democracy itself. Sadly, this could affect people fleeing awful conditions, such as the Rohingya, Iraqis, Afghans fleeing persecution or war. 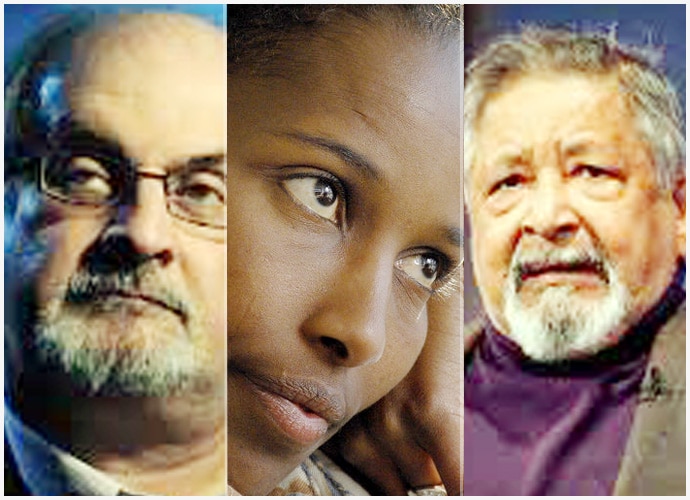 If dissenters were not welcomed, the voices of Ayan Hirsi Ali, VS Naipaul, and Salman Rusdhie today would be silent. (Photos: Reuters)

In his book Melting Pot or Civil War, Reihan Salam argues that due to lower class immigrants moving into the US, and the inter-generational immobility of economic advancement, second- or third-generation immigrants are likely to be poor, and would therefore hold a strong grudge against the rich white Americans, which could cause radicalism and eventually a Civil War within the US itself. Refusal of asylum to Asiya Bibi could fuel shift of the anti-immigration views from the Far Right on to the centrist position. Reihan Salam is the son of Bangladeshi immigrants and not a part of the Trump-supporting ‘White privileged men’.

Normalisation of the anti-immigration position because of migrants who, rather than integrating, create political power for the conservative religious and social views of their home countries, would be devastating to people fleeing war and genocide. 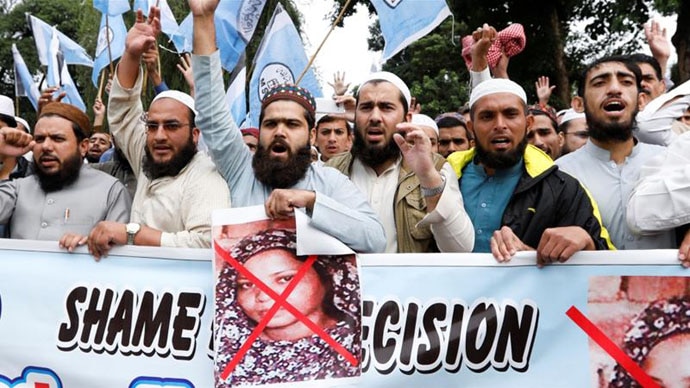 If Britain does not provide Asiya Bibi asylum because of the fears of what British Pakistani Muslims might do, Britons should think about what Britain has become. (Photo: Reuters)

By giving up on its own principles of liberalism, justice and secularism, the UK has added momentum to the destruction of the liberal world order, in which liberal democracies were havens of freedom and security, where people around the world could escape persecution and brutality.

If Britain does not provide Asiya Bibi asylum because of the fears of what British Pakistani Muslims might do, Britons should think about what Britain has become.

Also read: Asia Bibi verdict: What is happening in Pakistan now is blasphemy

#Religious minorities, #Asylum, #Asiya bibi, #Britain
The views and opinions expressed in this article are those of the authors and do not necessarily reflect the official policy or position of DailyO.in or the India Today Group. The writers are solely responsible for any claims arising out of the contents of this article.