Do you know how many million Muslims must die for War On Terror?

It is funny how one death in Palestine makes global headlines, but elsewhere their lives are a mere statistic.

The new millennium hasn't been that great for the Islamic world. 9/11 brought down two tall towers and in its place built a long wall of suspicion between it and the rest of the globe. However it's not just about attitudes. Catastrophe has visited the Muslim world in terms of deaths too.

Since then tens of millions of Muslims have been either been killed, injured or displaced in various wars and conflicts all over the Muslim world. The immediate aftermath of 9/11 was the US-led invasion of Afghanistan in 2001.

While death toll estimates fluctuate wildly, the upper limit has been put by the Nobel Peace Prize-winning International Physicians for the Prevention of Nuclear War (IPPNW) at about 2,20,000 in Afghanistan alone. The number for Pakistan is 80,000.

Then we had an invasion of Iraq in 2003 which the same IPPNW estimates that one million plus were killed. The Syrian Civil War began in 2011 and the upper limit put by the Syrian Centre for Policy Research is at 4,70,000, with the UN putting the number of internally displaced people at 7.6 million and refugees at 4 million.

And that's not all. Civil wars began in Libya in 2011, South Sudan in 2013 and Yemen in 2015. These are wars in progress and it is anybody's guess what the final death toll will be. Blasts have begun even in Turkey and Saudi Arabia. 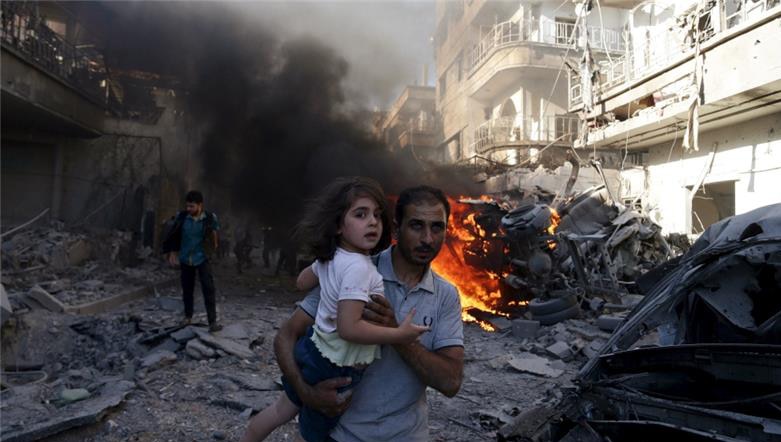 After an air strike in Aleppo, Syria.

It is funny how one death in Palestine sometimes makes global headlines but millions of Muslim deaths elsewhere are a mere statistic and most of the global population isn't even aware of them.

While everyone knows about the misdeeds of al-Qaeda and the Islamic State, did you know that Boko Haram has killed more than 20,000 and displaced 2.3 million people? Pakistani terrorist groups have killed more than 60,000 Pakistani civilians since 9/11.

As you can see everything is in tens of thousands or millions. While the 20th century saw civil wars of varied countries, regions and religions, after 2000, they have become a phenomenon predominantly in the Islamic world.

The Human Security Report Project has stated that while the world as a whole is becoming more peaceful, the Muslim world is not. This is a curious phenomenon and very difficult to explain.When the Romans adopted Christianity, it became the first Christian Empire. That title was taken up by Britain (strongly challenged by Spain and France). Today it is America. If you think I am being hyperbolic, remember that all the wars raged by America in the 21st century are against Muslim countries.

Also when the Republican presidential candidate Donald Trump talked about keeping Muslims out of America, his popularity actually soared and, with each attack by Islamic terrorist groups like the one in Brussels, he will grow more popular.

It may be really tragic, but it is a fact you have to stomach.

The Islamic world also saw many great empires. You had the Umayyad, Abbasid and Rashidun caliphates and in India you had the Mughals. The last great Islamic empire was the Ottoman one, but that collapsed in 1914.

When it comes to the Muslim world, that was the single biggest catastrophe and it changed the global power equation permanently. For them, that has been the biggest outcome of World War I.

Today if you look at the list of "top 10 economies or the top 10 militaries or top 10 science superpowers", you won't find a single Muslim country!

Strange isn't it if you consider that one in every four people in the world is a Muslimand the number of Muslim countries (with a percentage of population of 50 or above) is about 50. What is the reason for this?

After the collapse of the last great Muslim empire (the Ottomans), the Islamic world was severely disenfranchised. If you get a chance to look at the West Asia map of 1900, then you'll find a radically different place.

After World War I, the British and the French divided it in such a way that the fault lines remain to this present day. While the discovery of oil was an economic boon, it became a political curse and there was rampant exploitation by the West.

The Saudis tried to take the leadership of the Muslim world but that collapsed because the Saudi rulers are among the richest in the world and their lavish and opulent lifestyle has alienated most global Muslims.

The Saudis pumped in billions all over the world to spread their hardline Wahhabi ideology, but that has boomeranged because it created strife wherever it went and today the Islamic State has set about with the destruction of the Saudi monarchy as one of its goals.

You know things have been messed up when the Islamic State takes the high ground and tries to assume the leadership of the Muslim world!

The Ottoman collapse in 1914. The Sykes-Picot Agreement that divided West Asia in 1916. The discovery of oil in Saudi Arabia in 1938. The Partition of Palestine in 1948. The Wahhabi global fund explosion after the Gulf War in 1991.

You could say that all the chickens have come home to roost post-2000 and that is why suddenly you have such a grim situation in the Muslim world.

While most of it is the West's doing, there is one fault in the Muslim world: Their refusal to adopt democracy. The USSR collapsed in 1991 straining under its Communist dictatorship. China opened up in 1978, and survived and thrived only after that.

Nine of the top ten economies of the world are all democracies - this shows you how important that concept is.

Take one simple example. India and Pakistan were virtually the same in 1947. The same people. The same resources. The same likes. The same dislikes. The same legacy.The same culture. While most tout difference of religion, I think it has more to do with democracy.

India embraced democracy fully (save the Emergency in 1975-77) and is on course to become a global economic powerhouse. The Army ruled Pakistan for most of its existence and today the democracy is on the verge of collapse.

The two countries are poles apart in 2016 despite being virtual twins in 1947.

The West will continue to exploit the Muslim world as long as it is ruled by dictators.

The US will also do strange things like attacking Iraq for no reason in 2003 and not intervening in 2016 when the Islamic State is totally destabilising West Asia and is probably the biggest threat to the world today.

In finality, one feels the answers and solutions have to come from within the Muslim world.

But time is running out as are the lives of millions of innocents.

#Brussels Blasts, #Islam, #War on Terror, #Islamic State
The views and opinions expressed in this article are those of the authors and do not necessarily reflect the official policy or position of DailyO.in or the India Today Group. The writers are solely responsible for any claims arising out of the contents of this article.