Are buffaloes facing the brunt of cow protection?

With false rumours of a beef ban, we have let ignorance take over and guide our demons to throw the animal to the pits of death.

Around three years ago, the photo of a buffalo calf among a sea of buffaloes was doing the rounds on social media. A machete in his hands raised over his head, a man stood next to the calf whose head was bowed as if ready to accept its fate, ready to die.

People were aghast and Gadhimai came to be known to urban India.

A festival held every five years, in a village called Bariyarpur, a few kilometres away from the India-Nepal border came to be known as the largest animal sacrifice event at once place. Why would we in India be bothered about this festival?

Because it was learnt that more than 80 per cent of the devotees were from India and so were its animals - goats and buffaloes stuffed into buses and tractors were being taken to Bariyarpur to sacrifice to goddess Gadhimai.

Messages poured in asking us to do something, anything to stop the illegal transport of these animals, to stop the cruel slaughter of our animals. My colleague and superstar for animals, Gauri Maulekhi, filed a case in the Supreme Court seeking directions to stop the smuggling in Gadhimai.

Little did we know that the illegal transport at Gadhimai was just the tip of the iceberg for illegal cattle trade in the country. While the Gadhimai temple committee has announced a stop to the slaughter of buffaloes on their premises, buffaloes continue to be overloaded in trucks and transported illegally across the country.

By the time the animals would reach animal markets from farms or slaughterhouses from animal markets, because of the way they were packed in trucks, many would have collapsed or have broken limbs.

Under the Supreme Court’s direction, a committee was set up to deliberate on ways that the illegal transport could be curbed. Soon after, following the Supreme Court’s merging of the case against the illegal transport of cattle to Bangladesh, committees were set up with participation of animal husbandry departments of various states across India, including but not limited to Karnataka and West Bengal. With increasing measures to protect the cow, the buffalo has to bear the brunt of the milk industry as well as the beef industry. Photo: AP

In-depth discussions took place over several months, soon after which it was recommended that regulations for live animal markets and case property animals should be made. The government still didn’t move to make the regulation.

It was after a year from this, in 2016, following a contempt notice sent to the ministry of environment, forests and climate change that the rules were drafted and put out for public consultation.

The draft rules were notified in January, 2017 and many, including me and my organisation at HSI/India were elated. We were able to do something, just like millions of people around the country and the world wanted us to.

There was going to be a sustainable, long-term solution, not only to the illegal transport to Nepal but within India too. There was no hidden agenda to interfere in people's food choice or to side with one political party.

After the duration of 30 days of public consultation, the government delayed the notification by a further couple of months to further deliberate. On May 23, the rules were finally notified.

Unfortunately for the animals, it coincided with the third year of the present government and it became politicised. Was it intentional? We don't know.

The livestock market rules, now being debated all over newspapers and television channels, basically have provisions for registration of animal markets, provision of food, water and non-slippery flooring options and regulations for proper disposal of carcasses among other conditions for care and maintenance of animals. 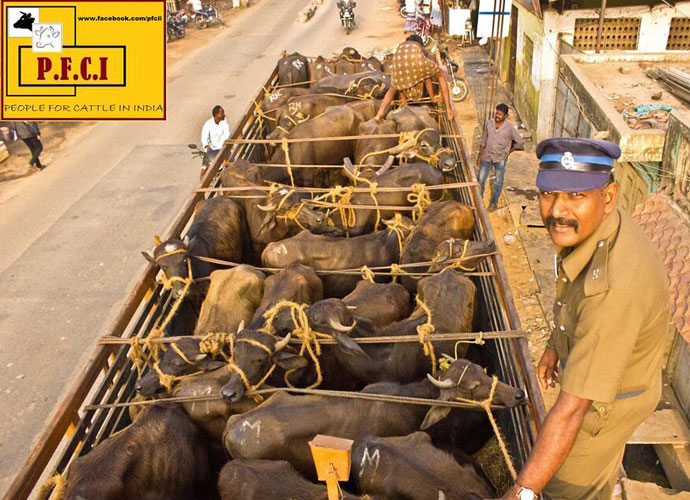 The rules include the animal “buffalo” in the definition of cattle.

Veterinary facilities and inspection have been made mandatory with regulation on housing facilities, prohibition on hot branding, and pulling and hitting of animals, while giving the animal market committee, headed by the district magistrate, the authority to monitor these markets and implement rules.

Another inclusion in the rules is the animal “buffalo” in its definition of cattle. However, representations by cattle traders and some state governments are making the government rethink and go back on their word on providing the most basic relief to the buffaloes that enjoy absolutely no protection in comparison to its fair cousin, the holy cow.

With increasing measures to protect the cow, the buffalo has to bear the brunt of the milk industry as well as the beef industry. They enjoy no positive story in religion or mythology in spite of being similar to the cow in sentience, the ability to suffer and feel pain.

Without even a glance at the regulations and with false rumours of a beef ban, we have let ignorance take over and guide our demons to throw the mythological symbol of the demon, the buffalo to the pits of death - perhaps to where we think it best belongs.

What pains me is that the very animals we were setting out to save are now being exempt from saving. Are we that disconnected that we cannot feel for the dark-skinned, sturdier buffalo who loves her own life as much as the cow does?

Are we that miserly that to politicise an issue and create another trending hashtag, we give up our moral sense of being kind to the animal which is on its road to death?

It's time we stopped pitting humans against animals and expand our circle of compassion to all animals, especially the farm animals and the ones who don’t enjoy our immediate sympathy.

Also read: Beef ban: Why save the cow but not its poor distant cousin buffalo?

#Animal abuse, #Cattle trade, #Beef Ban, #Buffalo
The views and opinions expressed in this article are those of the authors and do not necessarily reflect the official policy or position of DailyO.in or the India Today Group. The writers are solely responsible for any claims arising out of the contents of this article.

The writer is an animal welfare advocate and the deputy director of Humane Society International/India.