Burhan Wani was no hero. Stop these false tears please

Such agents of disaster must be driven out by all those Kashmiri Muslims who want peace in the Valley.

The attacks on Hindu areas post Burhan Wani elimination are just an expression of what perfect cowards these traitors are. This is the moment when CRPF and all our armed forces need the nation’s support and a big salute.

During Ramzan when cohorts of Wani killed our eight of our CRPF jawans, who from the Valley, except the brave and astute Mehbooba Mufti, condemned the act and termed it as anti-Islam?

If Wani was an icon of the jihadi savages, our CRPF jawans were dynamic young soldiers defending the motherland and the icons of a Constitution that guarantees freedom and liberty to all Indians, including of course the Kashmiris.

Wani represented a heinous mindset: he was corrupted by the big bearded maulvis and his parents didn't take good care of him. He could have easily become an IAS or an IPS officer or joined the Indian armed forces like thousands of other Kashmiri youths have done.

A few months back, I was in the Valley and met a Kashmiri Muslim father, who had only two sons and both had joined JK Live. He was proud of them and so were we.

All this rona-dhona on Wani places a wrong and a misplaced importance on him. He was no more than a poster boy of the Islamists like ISIS who are responsible for killing more Muslims than anyone else on this planet.

They are the inhuman and barbaric face of an Islam that is eating its own children. Hence all those, including Omar Farooq, who are tweeting cautiously about the “disaffected”, must come out of their shells and defend humanity and democracy. They should have courage to condemn all those forces that Wani represented, if they think Islam represents peace and human values.

They owe their present position to the Indian Constitution and democracy which are exactly the institutions assaulted by LeT and the mindless jihadis. These elements of ugly violence and agents of disaster must leave Kashmir if they want gunshots and they must be driven out by all those Kashmiri Muslims who want peace in the Valley.

Do they have any affinity with the people, culture, language and a secure future of their society? Or, are they happier being just a toy in the hands of the dark forces of disaster and do they even realise that?

Instead of telling them this candidly and providing leadership to the Kashmiri people when they need it the most, merely flowing with the emotional “treason-ism” is opportunism and not statesmanship. You are good when a member of the Vajpayee cabinet, but look the other way when in the Valley fishing for votes. 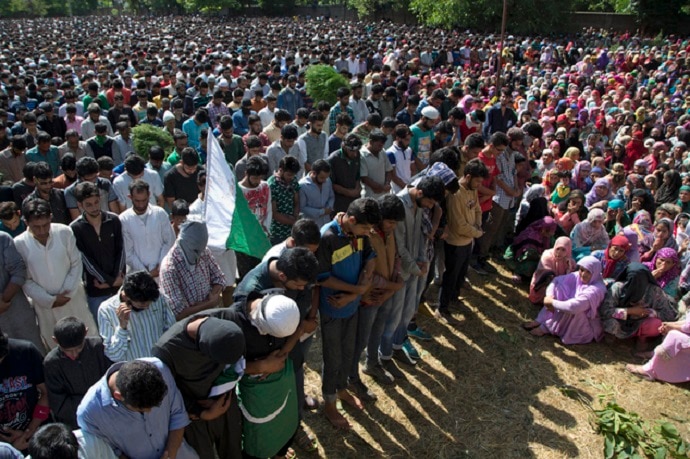 Those who are enamoured by the ugly, black ideas of the ISIS must be shown the “heavens” in Syria and other ISIS-ravaged sites and be given the glimpse of what that option – to die in a battle they choose for their “life after death” journey – really holds.

Our jawans are here to protect the human values and a positive life. They are the proud sons of this billion-strong Indians’ nation who attain martyrdom in a battle of honour and are not cowards like Wani’s gang.

It’s the time the maulvis and maulanas and leaders of various hues stand up and condemn the violence that has erupted post Wani’s death and tell the Kashmiri youth that the right path worthy of an applause is to lead the life of a sane, progressive Indian.

Bring laurels to your nation, society and parents by excelling in studies, participating in Olympics or becoming a uniformed soldier of India.

By donning a filmi fatigue bought from a kabadiwala can make a good picture on Facebook, but it doesn't take you even an inch closer to be a real fighter and defender of the values that scholars say Islam represents.

Do the militants ever help the poor and wipe out the tears of a mother in distress, or show their brilliance by starting an enterprise to make every Kashmiri youth more prosperous and self-confident?

Crossing the border like thieves and getting a few dollars to kill innocent people in the thick of night bring no honour neither to the religion they claim they are fighting for, nor to their community and parents.

I fail to understand where are the voices amongst the Muslims who have been benefitting from this democracy, Constitution and the liberal Hindu majority? Why are they wearing an inexplicable silence on the violence post Wani in the Valley that’s targeting Hindus?

Why they think it’s none of their business to defend the Indian framework that guarantees them a good life, freedom and the wings to fly? It’s nowhere else available. It’s true.

Muslims will not enjoy this kind of freedom even in the USA or any other place in Europe, leave aside in an Islamic country. And it’s their birthright like any other non-Muslim, a Hindu or a Christian.

While everyone else speaks out, it’s the silence of the liberal, democratic Muslim that’s irritating.

Wani represented nothing, except his own fallacies and a wrongly projected the self-image of a hero. It’s the duty of the saner Kashmiri Muslim leaders to speak out that Kashmir is much more than a flashpoint of a mindless violence.

If there can be a hero to the Kashmiri youth, that can be Shah Faesal, the Civil Services Examination topper in 2009, who showed they have grey material and are not class ten dropouts. He showed that only brilliance, excellence and hard work bring laurels to parents and the society. Not funds borrowed from a failed state.

Jammu and Kashmir government will do good if values of humanity and a patriotic curriculum is introduced with career counselling centres in major colleges and universities.

#Hizbul-mujahideen, #Kashmir, #Burhan Wani
The views and opinions expressed in this article are those of the authors and do not necessarily reflect the official policy or position of DailyO.in or the India Today Group. The writers are solely responsible for any claims arising out of the contents of this article.