How Delhi's 'return to normalcy' after the riots is not normal

Civil society has to respond, rise to the occasion inventively and to respond to a regime that does not understand the spirit of the preamble.

Protest is often seen as an act of negation capturing the drama of defiance. However, protest is also a revelation; it recreates the problematics of a society. The Shaheen Bagh protest amplified and thickened the outlines of the regime so people could see it clearly.

The BJP's reaction to Shaheen Bagh and the cascade of violent events that followed revealed four things. First, starting in 2002, violence was used to create polarities in society.

Secondly, majoritarianism had as its accompaniment mob rule, where conformity was imposed on minorities and marginal. The combination of majoritarianism and mob rule created a conformist society where marginal and minorities were literally suspect and expected to behave in a stereotypical way. Authoritarianism was ushered in through electoral rule. Shaheen Bagh exposed all this but added something more critical. It revealed that minorities do not want to behave like minorities living off caveats and concessions. 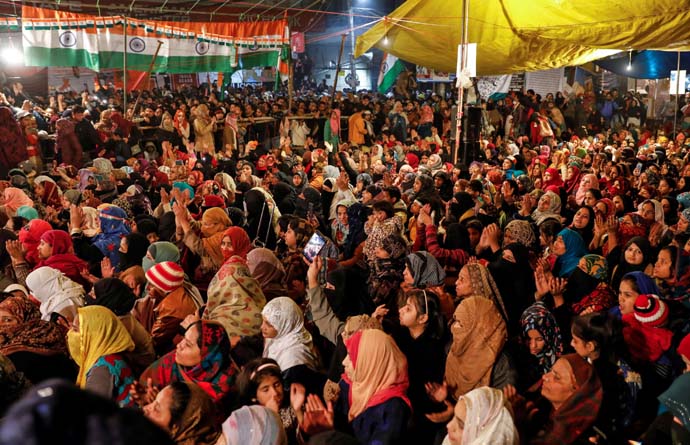 Shaheen Bagh protests revealed that minorities do not want to behave like minorities living off caveats and concessions. (Photo: Reuters)

They were tired of behaving like minorities and wanted the free play of citizenship to behave in a cosmopolitan manner. In fact, they demonstrated that they valued the Constitution as a sacrament. They displayed their empathy with other marginal groups. In reciting the Preamble that treated it as an anthem of citizenship a ritual that has found numerous echoes. Shaheen Bagh, rather than being part of a solution was aggressively reduced to a problem, in fact, a traffic problem.

The tactic did not work and riots became the next answer. In fact, the drama became a split level one, with US President Donald Trump visiting Sabarmati Ashram and dropping in at Rajghat, while Delhi experienced its worst violence since 1984. Blaming the police or a set of intermediate government officials will not do. This is not a question of administrative tactics. It is a question of moral responsibility. Violence at this scale may need an initial act of encouragement from the top, a tacit assent for it to spread so contagiously. A regime which talks the language of law and order and oozes security as a masculine preoccupation seems almost lax in handling disorder.

One has to realise that the aftermath of a riot receives little study or understanding in India. In fact, the riot narrative has to be seen as a tripartite narrative. The first is the prelude which chants the causes of a riot. Unfortunately, this becomes a blame game instead of a sociological and psychological understanding of a situation. The second stage involves the violence itself. Unfortunately, there is a holistic sense of the event. The reports come in fragments covering a mohalla or a street. A week later, the riot is forgotten as reports talk of a 'slow return to normalcy'. (Photo: Reuters)

The fact that violence and even the consumption of violence have become a major force is ignored. The aftermath is the most poignant part of the riot is always abbreviated. A week later, the riot is forgotten as reports talk of a 'slow return to normalcy'. The word normalcy itself is a fascinating one. Normalcy is not a rhythmic process where a society works its way back to everydayness. Normalcy, in fact, is a policy label where a regime demands the victim cease his preoccupation with the violence. It is a timetable imposed by the regime on a victimised people.

First, it ensures that people at the top distance themselves from the riot. They are good cops distancing themselves from the bad cops of the regime. Secondly, people who trigger the riot become creatures in a hallowed space and, in fact, are transformed into instant heroics by the majoritarian response.

The regime needs to go beyond its knee-jerk piety and answer some key questions. First, why did it have to threaten a protest which was unravelling peacefully? The traffic problem that Shaheen Bagh created was minor compared to the urban anomie that the regime has allegedly induced?

This is a situation where a wider civil society cannot remain silent. One is not talking of mere acts of support to the phenomenon called Shaheen Bagh. Mere acts of relief and philanthropy are secondary.

I think one needs an enactment of a deeper, more responsible civics where civil society tells the regime its obtuseness is obvious. Democracy cannot be erased through such an obvious use of bullying boy tactics. Civil society has to respond, rise to the occasion inventively and to respond to a regime that does not understand the spirit of the preamble. A Mann Ki Baat of a different kind is required where civil society has to tell the regime that it is responsible for people. What began at Shaheen Bagh as an act of pedagogy needs to be consolidated now. This is a turning point of history, and civil society as a moral and political force has to respond. Otherwise, the future may not forgive us.

#Shaheen bagh, #Nationalregisterofcitizens, #Citizenshipamendmentact, #Caanrcprotest
The views and opinions expressed in this article are those of the authors and do not necessarily reflect the official policy or position of DailyO.in or the India Today Group. The writers are solely responsible for any claims arising out of the contents of this article.