Cauvery is losing to environmental vandalism by Congress and BJP

A sensible solution to the dispute lies in the people of Karnataka and Tamil Nadu agreeing on the ways the water will be put to use.

As a Mysore-born citizen and with close relatives in the town, over the past several decades, I have travelled there from Bangalore by road and rail more times than I can count. Close to Mysore is the town of Srirangapatna through which flows the Cauvery - now more often spelt Kaveri (pronounced kaa-vay-ree).

Its waters are now the subject of national and international attention thanks to the horrific violence being perpetrated by macho hoodlums of the mostly Kannada chauvinist kind and their counterparts in Tamil Nadu, as also the Hindutva (Hindu-supremacist) variety always eager to fish in troubled waters.

A recent Supreme Court order ignited the ongoing agitation. Briefly, the apex court had asked Karnataka to release quantities of water to Tamil Nadu that the people in the former state feel they can ill afford to part with. Court room dramas often take unpredictable turns given the affiliations and the size of the purses of the dramatis personae. The issue could be decided with the help of an honest broker - the role the central government in New Delhi ought to have played - but given the current national leadership's cynical ideology, that is a forlorn hope. 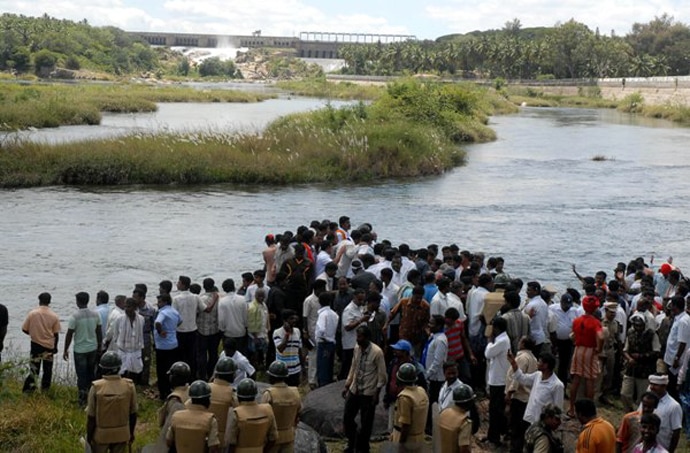 Rather than making plans for bringing more Cauvery water to cities such as Bangalore, the government ought to be working on promoting rainwater harvesting to adequately meet citizens' needs. Photo credit: Dajiworld/Internet

The dispute is over a "river" in the southern part of India that flows from the Coorg (Kodagu) district. It is a water body to which people in the south of the subcontinent are deeply attached. To call the Cauvery a river in year 2016 is rather problematic. From the snatches of the river I have seen from trains, buses or car windows, during my numerous journeys, the definition of the word "river" would need to be stretched beyond logic for that appellation to be used for the ribbons of liquids trickling underneath bridges of humble length.

I had a tactile encounter with its waters when a dear uncle of mine passed on a couple of years ago and I accompanied my cousins to the Pashchimavaahini (so-called as it is a brief west-flowing stretch of the Cauvery which flows from the Western Ghats towards the east,briefly via Kerala,into Tamil Nadu and Pondicherry) to immerse his ashes. My cousins, who are believers, took a dip in the shallow, lightly muddy waters; given that they are nearly as tall as I am, the devout fellows had to find spots where they did not have to stretch too far down to get wet.

Is the Cauvery a river really?

I have seen the Ganges - in fact once ridden a rickety, over-crowded boat across it - sometime in late 1974 or early 1975 in Bihar. And I've seen the Seine during several months living in Paris a decade later. During that sojourn, while travelling to neighbouring countries, I've ridden in trains or buses past the Thames, the Rhine and the Danube, the last named having inspired a very great composition in the Western Classical music genre - The Blue Danube (An der schönenblauen Donau) by Johann Strauss (most effectively used in Stanley Kubrick's 1968 film, 2001: A Space Odyssey).

Although I've not seen the Volga, its mightiness is conveyed by The Volga Boatmen's Song, one of the greatest of folk songs of not only Russia, but the world. Nor have I seen the river Moldau (Vltava) that inspired one of the most heard pieces of music, the Moldau, the second of six symphonic poems of Bed?ich Smetana's Mávlast.

While working as PTI's Beijing correspondent in the late 1980s and the early 1990s, and having travelled to other cities, I'd gazed on the great Yangtze - at Wuhan in central China as well as at Shanghai where it flows into the East China Sea.

These are mighty, majestic rivers.

The Yamuna, which was in the news thanks to Mr Mr Ravi Shankar's antics not too long ago, failed to impress when I lived in New Delhi for 11 years until 1988, but it nevertheless carries a good amount of water, albeit much polluted.

In comparison, the Cauvery is a puny rivulet. However, seeing the rocks, outcrop and barren stretches of land around it, it is entirely plausible that it had qualified for the "river" label once, bearing a decent amount of water. That was before the Western Ghats were steadily eroded through encroachments by not only individuals, but also government-sanctioned corporate marauding.

Any garden variety environmentalist would stress the need to respect Mother Nature and end the destruction of catchment areas of rivers. The Uttarakhand floods and their direct link to vandalism in forests upstream come to mind. Renowned ecologist Madhav Gadgil's report on the Western Ghats was ignored by the Congress, which is a mirror image of the Bharatiya Janata Party - the recent highly inept handling of the violence in Bangalore has, once again, proved Siddaramaiah is little more than the fourth BJP chief minister of Karnataka.

Meanwhile, the BJP-Congress consensus is to tag all environmental activists and other human rights activists as anti-national. Not long ago, in the desperate dying days of the Manmohan Singh regime, Veerappa "Oily" Moily occupied both the ministry of petroleum and natural gas and that of environment and forests, furiously signing away vast tracts of hills and forests - many of them home to indigenous peoples - with both hands as it were. His successor Prakash Javdekar in the Narendra Modi Cabinet has been equally overzealous.

NGOs like Greenpeace and Amnesty International, which remind governments of the need to protect the environment and the rights of indigenous peoples, have been depicted as enemies of India.

A sensible solution to the Cauvery dispute would lie in the people of Karnataka (65 million) and Tamil Nadu (78 million) arriving at measures to ensure proper maintenance of the watersheds, while agreeing on the ways the water will be put to use, with priority being given to food crops, rather than commercial ones.

Rather than making plans for bringing more Cauvery water to cities such as Bangalore, the government ought to be working on promoting rainwater harvesting to adequately meet citizens' needs. But that would mean people-centric and environmentally sustainable planning, not schemes hatched by contractors, bureaucrats and politicians.

Post your comment
#Siddaramaiah, #Tamil Nadu, #Karnataka, #Cauvery water dispute
The views and opinions expressed in this article are those of the authors and do not necessarily reflect the official policy or position of DailyO.in or the India Today Group. The writers are solely responsible for any claims arising out of the contents of this article.