If our outdated and under-dimensioned buildings are to be given way for new locations and modern upgrades, then we can't blame Covid's time. Covid hit India officially in March 2020. Plans for the CVRP were sanctioned and approved in 2019.

As a child growing up in Delhi in the 1960s, there were only three places our parents ever took us on an outing: the zoo (once a year), the Ramakrishna Mission (almost every Sunday evening as there was no TV back then) and the museums (once a month). There were only two museums in Delhi then — the Dolls Museum and the National Museum. We boys got tired of the Dolls Museum in one visit. I must have been the youngest "research scholar" visiting the National Museum (NM) often with a notebook in hand, to jot down notes. No ballpoint pens were allowed even in school, as they ostensibly spoiled one's handwriting.

Photos were expensive. Photocopying machines had not been invented yet, or had come to India. The 1970s were the years of innocence. The world was static. Republic Day was a matter of pride. Lal Quila was that fort where one went for the best traditional eat-outs and cheapest shopping. With 10 rupees in pocket, we felt maha rich. There was only one big hotel — The Ashok. It was built for the Maharajas by the Maharajas. We entered it occasionally for cultural shows. Sapru House was the only good auditorium before Mavalankar came. Delhi was a sleepy village in the 1960s and the 1970s. Today, after 50 years, the National Museum is still the same but looks quite small. We have grown up in height, but the museum hasn't. Its inventory has grown by lakhs, but not its space. Finally, the NM is set to get some serious space. And eventually, it will be moved to the most prestigious address in the capital — the North and South Blocks. What can be a better address, given that the current building is seriously limiting. Few valiant directors in past (and the present head) have managed to run it with all its limitations and it is being readied for a new gallery for the G20 Summit due in 2023. So it is not being demolished. Yet.

The timing is never right for any major move. For a poor country (then) or a developing one (now), what is culture? In real terms, not even one per cent of the national budget. We boast of a rich past, of a great civilisation. But in 2021, where does it manifest the most? In our spaces and symbols. For, what was the most visible part of the world's first civilisation? Mohenjo-daro’s Urban Plan, The Great Bath, The Dancing Girl. Mohenjo-daro-Harappa is about a planned city and symbols. 2000 years ago. “OMG” in today’s lingo.

In 2019, the government mooted the idea of expanding the Central Vista to make way for an integrated administrative complex, where most of the ministries, now housed in shabby buildings that have gone past their expiry dates, and a new Parliament building, can be accommodated. In 2019, the world didn't know of the Coronavirus from Wuhan. Who knew that in a span of a few months, it would spread from a province in China to the whole world! 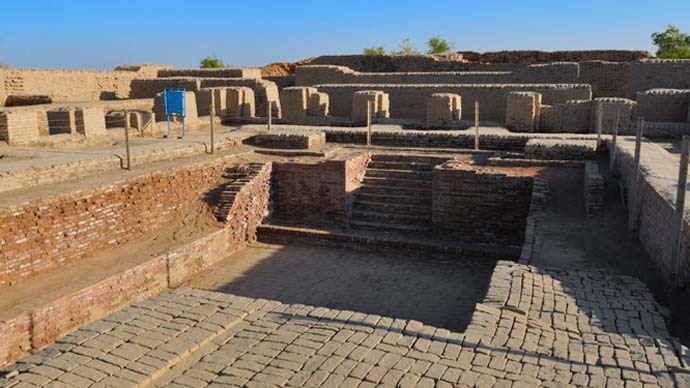 The Great Bath of Mohenjo-daro: Remnants of our culture. (Photo: Wikimedia Commons)

So this idea that all developmental or economic activity should now stop because there has been a second wave and third in most countries, belies common sense. The Tokyo Olympics are still going on. Despite protests and safety concerns, because all related developmental works began long ago. The International Olympic Committee (IOC) is not even a government body; yet the world is listening to it and abiding by it. The death of even one citizen is saddening. However, the challenges provided by medical systems (or lack of it) have their own repercussions. If after 70 years of independence, we still don't have enough hospitals or supplies, then whose fault is it? A collective one. When Delhi's population has grown from four lakhs in 1947 to almost two crores now, why didn't the successive governments in the past keep pace with societal needs? As the adage goes: When we point to blame with one finger, the remaining four point at us.

As a cultural historian and observer, I limit my discourse to culture and its manifestations. Despite the size and scale of this country, we are one. That's the beauty. That's our first most important symbol, metaphorically. No matter the past problems in Punjab or Kashmir or distance from the Centre of states in the Northeast, or southern India feeling cut off, or the western part of the country being financially strong — each part of India is amazing. As a space, India occupies vast amounts of everything — mountain chains, a long coastline, flatlands, and even the desert. It is indeed a continent unto itself. Culture, then, is first of all about people.

People need a stage to express, or space to enjoy. Culture is not static. New institutions get added all the time. With every decade or two, India or at least the capital, saw new institutions being added. After the NM, it was the National Archives, then the three national academies (Lalit Kala Akademi, Sangeet Natak Akademi and Sahitya Akademi), then the National School of Drama, National Museum of Natural History, industrial fairs at Pragati Maidan - at the corner of which came up the National Crafts Museum, The National Mission for Manuscripts, Indira Gandhi National Center For The Arts (IGNCA) and National Institute of Fashion Technology (NIFT).

So many private institutions were given highly subsidised lands to create the Trivenis and the Bharatiya Kala Kendras. 50 years ago, the Lodhi Estate Area came up, where some space was allotted to say, Andhra culture or Sindhi. 30 years ago, the Qutb Institutional Area came up. Here too, some artists got handsome institutional lands, which have thriving art centres today. Delhi has grown and how! Other cities or state capitals too have grown with cultural priorities, but Paris is Paris. Rome is Rome. Capitals often get privileged treatment. As the power centre is there, so too the concentration of symbols of power and fine spaces. 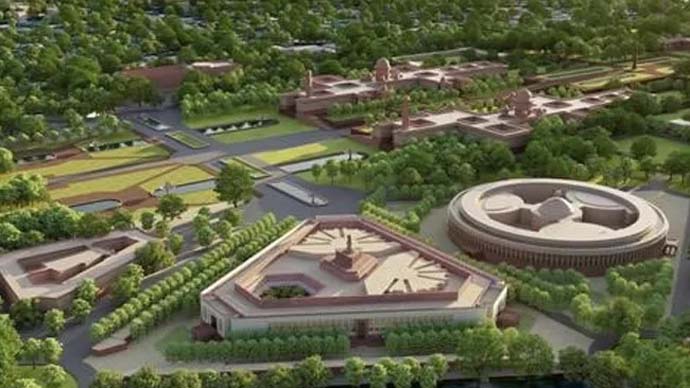 One multi-disciplinary institution that came about in the mid-1980s in prime Central Vista, was the IGNCA. It was actually allotted dilapidated defence barracks in Central Vista in the mid-1980s. It mostly continues that way till now, even 30 years after its initiation. I was there for the opening ceremony, and thought “achche din aa gaye! (the good days are here)” in 1987-88. It just became a preserve of a cultural czarina, and under a banyan tree, nothing grows. Few expensive exhibitions and books. That's all. The new building finally came up and is now 20 years old. It is severely climate-challenged and contains India's most expensive unusable basement. The American architect who designed it (finally selected through a national competition) had never lived in India to understand Indian climate, local power cuts or maintenance woes.

We Indians often build grand things but the maintenance is zero. Look at our stadiums, government hotels and buildings. Private ones shine. Look around and see for yourself. Today, if these outdated, under-dimensioned and totally impractical buildings are to be given way for new locations, modern museum display and upgrades, then we can't blame Covid for coming at the wrong time. Covid hit India officially in March 2020. Plans for the Central Vista Redevelopment Project were sanctioned and approved a year earlier, in 2019.

There is no connection, though certainly a sentiment that the second wave could have been handled better. As the story goes: Everybody was sure that Somebody would do it. Anybody could have done it, but Nobody did it. Democracy at work. Post mortem is always easy. One thing is for sure: we will hopefully be better armed for the third wave.

On the idea of a new Central Vista, the Supreme Court cleared all contentious concerns and the Delhi HC last week dismissed a PIL too. The HC called the Central Vista remodelling and construction plan "essential" and of "national importance".

In the 1980s through the 1990s, we did huge cultural exchanges with the UK, France, the USA, the then-USSR, Sweden, Germany, and even China. It was called the ‘Festivals of India’. We sent many precious artefacts and artists to museums for months. If we could do it 30 years ago, so what's the problem and the hullabaloo being vented about shifting artefacts from one end of the road to another?

Are we so incompetent that we can't pack and shift the National Museum or the National Archives? The IGNCA has already very ably (during the pandemic months) shifted everything it had (40 major collections, around two lakh books and more) with staff, to the old Janpath Hotel, refurbished till the new building comes up at old Jamnagar House. We have enough qualified staff in most institutions to do so now and technology to help, better than 30 years ago. Why the retro-nostalgia, folks? Colonial mindsets and few out-of-work quasi historians raising doubts about our ability? Why do we need new spaces for saving our symbols of heritage and history?

Symbols. Do you know what is the one uniting symbol of India — art-wise, science-wise or commerce-wise? Nataraja. The Lord of Dance. Atoms in motion and the most sold artifact from Jama Masjid to Janpath. It connects most of India — Mumbai to Madras. You can see it in most homes or offices. Some don't even know what it is but keep it nevertheless as a sign of "culture". Why, we even fought a long legal battle and got a rare Chola Nataraja back from the UK 30 years ago! One has to fight for what is ours by right. Greece did it for its Marbles. Spaces and symbols need protection. When less than three per cent of Indians pay taxes, how can we build roads, hospitals, provide for education, and so on?

Should corporates come forward and build cultural spaces? The Tatas have built the National Centre for the Performing Arts (NCPA) in Mumbai. The Birlas built the Birla Academy of Art And Culture to promote arts in Kolkata. Where are the new philanthropists in arts and culture? Why was culture taken off the CSR listing? Most companies now say that they support education, not culture. Lord McCauley delinked Indian culture from the educational system. Temples in Madurai or Banaras were our natural cultural settings for dance and music, art and architecture. The audience was readymade too. The delinking destroyed our roots. The result is for all to see. Relinking with the past with an eye on the future is most important now. Else, what is Indian in India today? Think about it.

Also Read: How Delhi's NGMA is taking art to the masses

#Central vista redevelopment project, #Arts, #Indian culture, #Centralvista
The views and opinions expressed in this article are those of the authors and do not necessarily reflect the official policy or position of DailyO.in or the India Today Group. The writers are solely responsible for any claims arising out of the contents of this article.