Why Chandigarh elections are no referendum on Akalis or BJP

Chandigarh is not a microcosm of Punjab.

And a municipality of a centrally-administered territory is not a baby state either.

Nevertheless, I congratulate BJP chief Amit Shah for his party's sterling performance in the civic elections of The City Beautiful.

Billed officially as the dream city of the first prime minister, Jawaharlal Nehru, Chandigarh has been a successful experiment in urban planning, by courtesy of its French designer, Le Corbusier. So, it's anything but a replica of Punjab.

Still, the BJP president euphorically applauded his party's sweep in the municipality of the 114-sqkm city as a verdict in favour of demonetisation. Punjab chief minister and ally Parkash Singh Badal cheered it as a "trendsetter" for his dream-vision third-successive term in the state.

Come on gentlemen! You are seasoned and veteran politicians. You would know better than anyone else how Chandigarh and Punjab are diametrically distinct. 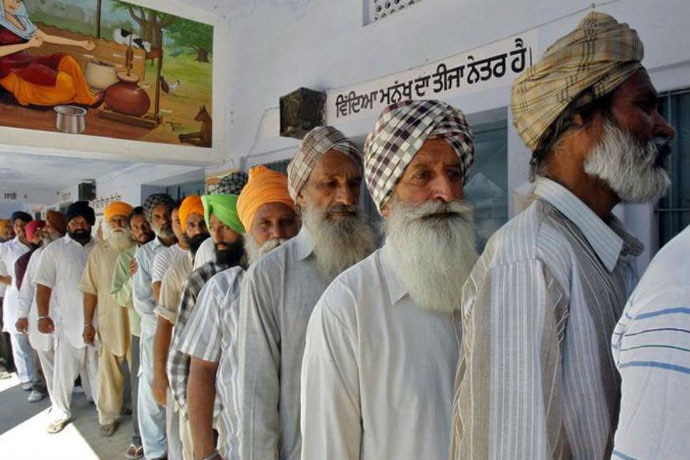 Luckily for the BJP, the Badal factor didn't really factor in for Chandigarh. Photo: Representational/ Reuters

Let's face some facts: In almost all its 60-plus sectors, The City Beautiful offers almost all modern, urban facilities to its residents. From marketplaces, schools to leisure and sport centres.

Declared a union territory in 1966 - when the Hindi-speaking Haryana and mountainous Himachal Pradesh were carved out of Punjab - Chandigarh continues to house the diverse legacy of what are now three separate states.

Any comparison with Punjab, which the BJP and the Akali leadership tried to draw in the middle of a tough fight from the Congress and the Aam Aadmi Party (AAP) in state elections due early next year, is too far-fetched.

In the files of India's 2011 census, Chandigarh's population stands at 10.5 lakh.

Punjab is home to almost three crore people. And it's largely rural. Of the state's 50,362 sqkm expanse, more than 48,000 sqkm are villages. Chandigarh, on the other hand, is precisely 97.25 per cent urban.

Unlike Chandigarh, farming is the mainstay of Punjab's economy.

In sharp contrast, majority of workers in the union territory are employed in occupations other than farming or even household industry.

Data shows that the proportion of cultivators and farm labourers make up less than one percent of the city's total workforce. So Chandigarh, centrally-controlled and funded, is largely a well-fed city of bureaucrats, IAS, IPS and military officials, pensioners and prosperous businessmen.

Obviously, these groups of population, wherever they are in the country, rely less on what is now rationed cash than on plastic money. They aren't squeezed by the cash drought that the demonetisation measure has inflicted on farmers, artisans, factory workers and ordinary folk in the hinterland of neighbouring Punjab.

Now, let's have a look at Chandigarh's religious profile.

Hindus form more than 80 percent of the city's population. Sikhs make up only 13 percent. In Sikh-majority Punjab, the ruling Badal dynasty has come under intense fire by its critics in religio-political circles for its handling of institutions of faith.

Opponents are also slamming the Badals heavily for massive corruption in governance, which they deny. And we all know how Udta Punjab sparked a national debate on the state's drug scourge, which the governing family insists isn't as grave as it has been projected by the media.

Luckily for the BJP, the Badal factor didn't really factor in for Chandigarh, which understandably is not as directly hit as a big population in Punjab appears to have been over the past decade.

So, Shah and Badal Sr merely did their job when they advertised a municipal win as a great referendum on demonetisation and their alliance in Punjab.

It's fair enough for any politician to market his or her small accomplishment for bigger, momentous challenges ahead.

But it's a bit too unfair to underestimate voters of a state, who apparently have been subject to multiple whammies: from drugs, unemployment, crop failures to what is now a currency bombshell on their livelihoods, let alone snaking queues outside cashpoints.

#Congress, #AAP, #Akali Dal, #BJP
The views and opinions expressed in this article are those of the authors and do not necessarily reflect the official policy or position of DailyO.in or the India Today Group. The writers are solely responsible for any claims arising out of the contents of this article.