The party has ignored the emotions of its supporters as well as the TDP supremo's past which is chequered with constantly discarding his principles to back the winning side.

One of Mark Twain's lesser known novels, which he wrote with his close friend Charles Dudley Warner, 'The Gilded Age: A Tale of Today', in 1873 is uncannily reminiscent of the world we live in today. It was an era of rising economic inequality, stagnant living standards, growing anxieties about monopolies in the economy, crippling financial crises, political discourse being dominated by whipped-up emotions that the country (the USA) was doomed, and political corruption with 'wave' elections.

In fact, the era between 1973 and the end of the century came to be known as the 'Gilded Age'.

And Charles Dudley Warner's (many people mistake it to Mark Twain) quote: 'Politics makes strange bedfellows', became a popular expression to explain the most opportunistic alliances in politics.

While there have been many stories of 'foes turning friends' (and vice versa), in India, the alliance between the TDP and the Congress is something that even seasoned observers of Indian politics are not able to make sense of.

It's a surreal moment for those who follow the politics of Andhra Pradesh. They surely are the strangest of all possible bedfellows, given the acerbic past they shared in the erstwhile state of Andhra Pradesh. However, if one looks more closely, despite the bitter campaigning during each election, many leaders have frequently shifted camps depending upon who the victor was.

Electoral results shaped the leaders' worldviews and their 'ideologies' suddenly dawned upon them. In reality, there was no real ideology either of the parties (much like all the other political parties in India) believed in or espoused.

The alliance is a cruel signal to the party supporters that 'ideologies' are not meant for leaders to follow, but for the millions of faceless volunteers. Political arithmetic is given importance over the emotions and aspirations of the volunteers on the street. Before making such alliances, supporters of the party are seldom taken into confidence, and are expected to defend the decisions of the leaders - who may switch sides and return, depending on the electoral fortunes. 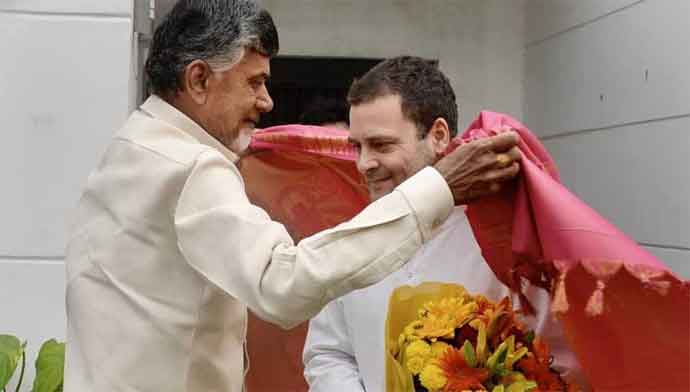 Political arithmetic is given importance over the emotions of the volunteers on the street. (Photo: PTI)

In forging an alliance with the TDP, the Congress leadership has exposed its naivete as it ignores the emotions of its supporters as well as the TDP supremo's past which is chequered with constantly discarding his principles to back the winning side.

While the TDP supremo N Chandrababu Naidu claims that this is a 'democratic compulsion', the Congress should recall the days when he was the convenor of the United Front to which the Congress extended outside support. Back then, the parties that supported the United Front kept aside their differences to keep the BJP out of power, and much like today, the stated objective was to 'protect the country from divisive forces'.

Yet, in 1998, Naidu switched over to the BJP's side, claiming that the people of Andhra Pradesh wanted to see Vajpayee as the Prime Minister of India. He further claimed that he was joining the BJP-led NDA so that the TDP can be a 'restraining influence' which will keep them 'under check'.

Yet, he continued to support the NDA - even after 2002's Gujarat riots. 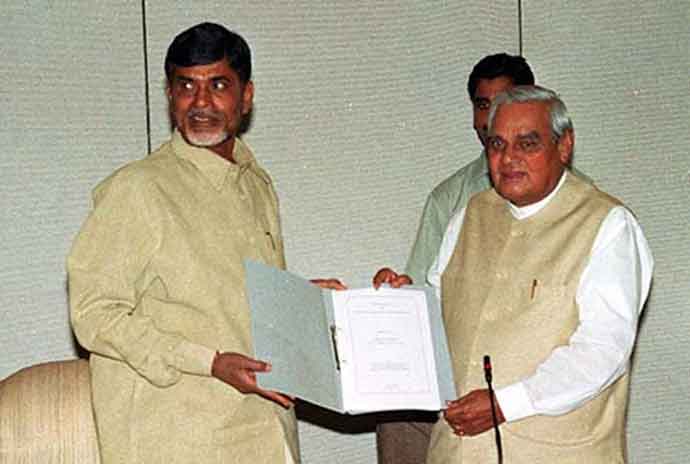 In 1998, Naidu switched over to the BJP, claiming that the people of Andhra Pradesh wanted to see Vajpayee as the Prime Minister of India. (Photo: PTI)

After losing power along with the BJP in 2004, he cited his continuance with the BJP as one of the prime reasons he lost. He eventually pulled out of the NDA - but went back to the BJP in 2014, despite it being led by Narendra Modi, who was the chief minister during the Gujarat riots.

It is therefore very surprising that the Congress is forging an alliance with the TDP, despite the disapproval of its own leaders and supporters, carrying out a move which is being perceived as a breach of trust.

India's 'Gilded Age', will probably be known as the time when ideologies of parties didn't matter and only the whims of party chiefs did.

If only the leaders of political parties realised that a party's greatest asset is its supporters who truly believe in ideology-based politics. That would inspire more educated youth to take part in politics.

#Rahul Gandhi, #Andhra Pradesh, #Chandrababu Naidu, #Congress-tdp alliance
The views and opinions expressed in this article are those of the authors and do not necessarily reflect the official policy or position of DailyO.in or the India Today Group. The writers are solely responsible for any claims arising out of the contents of this article.