Exposing the lies in Chetan Bhagat's letter to Kashmiri youth

I am not ashamed to accept that the nation I belong to perpetrated atrocities.

I must start with an apology to Kashmiris since it may appear I'm presuming to speak on their behalf. I am not. I cannot. I can't even begin to imagine, much less preach, about the pain they have suffered. Please forgive me, I couldn't help but feel enraged at what Chetan Bhagat wrote in Times of India. Bhagat's post is an attempt at suppressing the truth camouflaged as advice. I can't help but call out his lies.

He starts with "Dear Kashmiri friends (the ones who don't like India)". This is where the deceit begins.

Many Kashmiris have been wronged by India. By glossing over this inconvenient truth, he tries to shift the blame from the perpetrators of atrocities to their victims. It is the equivalent of addressing rape victims by saying "Dear women friends (the ones who don't like men)". In one sentence, the cruelty suffered by those being addressed is rendered non-existent.

I must briefly digress here. Most Indians find the very idea of our nation being unjust or cruel to its citizens unacceptable. For most of us, political parties and politicians can do wrong, but the nation or our society cannot. "Mera Bharat mahaan" and anyone who wants to add a but or question this belief is declared "beimaan".

Criticism and questions are met with the retort - if you don't like the country, you can go to another country. One is also accused of "defaming" the country - as if our attempt at denial and suppression of truth isn't visible to the world. As if merely a repeated assertion that we are great will make us great. 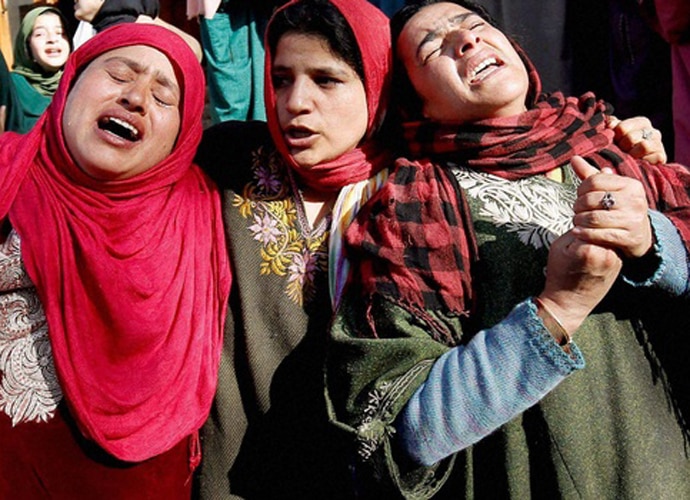 Relatives of a boy killed in Handwara.

One problem with this attitude is that the "integration" that Chetan Bhagat appears to be seeking is inter alia not possible as long as we live in denial. You can't simultaneously call the victim a liar on one hand and seek reconciliation on the other.

Every year, Australia celebrates National Sorry Day, May 26, to remember and commemorate the mistreatment of the country's indigenous population.

On February 13, 2008 Kevin Rudd, the then prime minister of Australia gave a speech in the Australian Parliament, where he apologised to the "stolen generations" on behalf of the nation. The full speech is available here but it is important to quote some excerpts:

Canadian prime minister Justin Trudeau recently announced that on May 18, 2016, he will make a formal apology in the House of Commons for the Komagata Maru incident where 376 passengers of mostly Sikh descent arrived in Vancouver and were refused entry into Canada due to the discriminatory laws of the time.

This piece written by me illustrates how the members of the armed forces have been getting away with fake encounters for all too long, thanks to AFSPA.

Within last week about half a dozen people have been killed by the armed forces, including a 17-year-old boy studying in Class 11. Their alleged crime? They were protesting by throwing stones. This report claims, however, that the firing in Kupwara was entirely unprovoked and casts aspersions about the claims of stone throwing.

The tragic bit is, when Bhagat talks about "something terrible" happening in Kashmir, he isn't referring to these deaths at all. They find no mention in his sermon. No, he washes away every crime committed by the government and the Army under the garb of the difficulties in controlling "terrorism that co-exists with a civilian population"'.

Also read: Open letter to Chetan Bhagat from a Kashmiri: Thanks, but no thanks

Secondly, the irony in Bhagat's piece is cruel, especially because he argues:

"Another issue is women's rights. Half of the Valley's people are women. Given the hold of fundamentalist Islam, their rights would be curbed under both the independence and Pakistan options. This half of the population would be better off with India. Or do what women want not matter?"

Women in the valley, like women outside the world want justice for the crimes perpetrated upon them. If Chetan cares about what women want he can start with reading this report which describes how members of the armed forces rape and get away with rape all too often.

He then cites the landlocked nature of Kashmir to argue that their best hope of a happy future is with India. What he seems to be saying is, your life is miserable, but this degree of misery is the best and the only choice you have, so suck it up.

I'm guessing Kashmiris, like most of us, want a future and a present with complete dignity and freedom. That they expect equality and not justification of murder on account of them being pawns in an international conflict. Bhagat reserves the cruellest bits for the concluding paragraphs of his post, where he astonishingly demands that it is Kashmiris who must "integrate" with India. "So, it is youth in the Valley who have to now start a movement to really solve this problem," he writes.

Gee. I suspect those guys are busy mourning their dead Chetan Bhagat. They're busy swallowing the indignity and humility heaped upon them for decades. They're busy waiting for justice. They're busy suffering on account of the "difficulties in containing terrorism". They're busy witnessing the horror of their women being raped by those who claim to be there for their security.

They're powerless and helpless. And they're expressing is grief and rage in the small ways that they can. Throwing stones when their loved ones are murdered and bursting crackers when India loses in a sport. Even that seems to trouble us so much, doesn't it? We feel so much hurt at the bursting of crackers in a loss at a sport. Imagine then what those getting away with murder, rape and oppression must feel like to the victims of this oppression?

The first step to reconciliation is the oppressor acknowledging the oppression, not the oppressor demanding that the victims forget what happened and move on, because what other choice do they really have.

Dear Kashmiri friends, I hang my head in shame. I am ashamed at the injustice Kashmiris have suffered for decades. I am not ashamed to accept that the nation I belong to perpetrated atrocities. Our nation cannot become great unless it accepts and embraces the dark chapters in its history and its present.

#Chetan Bhagat, #AFSPA, #Handwara Killings, #Jammu and Kashmir
The views and opinions expressed in this article are those of the authors and do not necessarily reflect the official policy or position of DailyO.in or the India Today Group. The writers are solely responsible for any claims arising out of the contents of this article.

The writer is a lawyer.