After Somaru Nag, Santosh Yadav and Prabhat Singh, it was Deepak Jaiswal’s turn to be witch-hunted by Bastar’s notorious cops.

It seems Chhattisgarh police is not even interested in maintaining a modicum of false fairness when it comes to random arrests and slapping of bogus charges on human rights activists and journalists working in the strife-torn Bastar region. With 32-year-old Deepak Jaiswal’s arrest on Saturday, that too on a seven month old complaint by a school principal in Geedam, barely days after Prabhat Singh’s arrest over “inflammatory WhatsApp messages”, it is obvious that Chhattisgarh police and state administration are betraying a sense of impunity not seen in a long time.

Jaiswal, who works (worked?) with the local daily Dainik Dainandini, has been booked under Sections 448, 385m 353, 186(34), 186 of IPC and 6 of Chhattisgarh State Examination Act, according to this Times of India report. The article also states that the Dantewada superintendent of police has denied that Jaiswal was even a journalist, although he had been acting as Dainandini’s bureau chief for the Bastar region for over a year until his arrest yesterday. 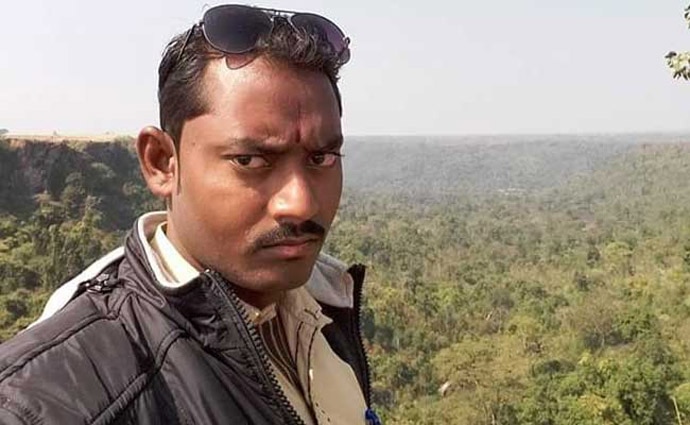 Reports also suggest that Jaiswal’s arrest is connected to Singh’s since both have been booked for the same incident involving supposed trespassing and filming/interviewing of students at a school in Geedam, in Dantewada. Singh and Jaiswal, like Somaru Nag and Santosh Yadav, have been filing stories on the gross human rights violations perpetrated under the garb of anti-Maoist operations which have been “ stepped up” in the last one year in the region. Only last month, tribal activist and Aam Aadmi Party member Soni Sori was attacked with an acid-like greasy substance that caused serious injuries to her face and led to hospitalisation.

Freelance journalist and contributor for Scroll.in, Malini Subramaniam, who was reporting from Bastar’s Jagdalpur area for the last four years, was also hounded out of the region after gross intimidation, threats and damage to her property. Unlike the English-educated Subramaniam, local journalists have been at the receiving end of Bastar cops, languishing in jail for over six months now like Yadav and Nag, while braving constant fear of arrest, and even physical abuse, by the state police.

Chhattisgarh is officially a police state now. Journalists I know for years are scared to even talk on phone. Social media watched closely

Imagine! This whatsapp message landed Bastar journalist Prabhat Singh in jail (By the way he wanted to write 'Gaud') pic.twitter.com/RdSq8B8xDO

Also: why are journos like Prabhat forced to take multiple jobs? Because you pay peanuts to stringers. Many forced to get ads (5)

Seasoned journalists with specialisation in Bastar, such as Rahul Pandita, have lamented on Twitter how the scribes he had known for over a decade are simply too afraid to even talk anymore. Social media and chat platforms like WhatsApp are being closely monitored and any information perceived to be even remotely negative on the state police and their local vigilantes (such as Samajik Ekta Manch) could lead to arrest, or forcible exit from the region.

Remember: Chhattisgarh is only a lab. Test trials for introducing journalist arrests elsewhere will happen sooner than you realise it.

At the same time, there is at most only a trickle of outrage on mainstream media based in Delhi, with very little print space and air time devoted to impartially examining what is going on in one of the most riotous belts of India.

While harassment and abuse of adivasis is a routine affair, with the scam of tribals being paraded as “surrendered Maoists” now out in the open, it’s an extremely fraught situation for the locals not just in Bastar but whole of Dantewada and in fact the state of Chhattisgarh. Anyone trying to blow the lid off Chhattisgarh’s deep nexus of police crimes and rampant human rights abuses – whether they are activists or journalists – faces the veritable wrath of laws designed to brutally clamp down on every voice of dissent. Just a few days back, Saibal Jana, a doctor who has devoted his life to looking after the tribals of Chhattisgarh, was arrested on flimsy and cooked up charges. Santosh Yadav and Somaru Nag, in fact, have been charged with the draconian Unlawful Activities (Prevention) Act and Chhattisgarh Special Public Security Act (CSPSA), the supposed anti-Maoist laws, but which have been unleashed on mere scribes doing their jobs.

Besides rife arrests, other crimes to which the state police turns a blind eye, or actively collaborates in, include sex trafficking of adivasi women, illegal mining and land grab, construction scams, fake Maoist surrenders, fake encounters, resurfacing of banned groups like Salwa Judum under different names, police-vigilante entente to keep the tribals and other locals under constant fear of the gun, both from the cops and the actual Maoists.

It is unbelievable how chief minister Raman Singh can stay mum over the gross atrocities happening in his state for the last decade he has been at its helm. Are we to understand that Mr Singh does not see anything out of ordinary about Indian citizens being oppressed and subject to most inhuman treatment by their own government?

Or is this the new normal?

#Raman Singh, #Bastar police, #Deepak Jaiswal, #Chhattisgarh
The views and opinions expressed in this article are those of the authors and do not necessarily reflect the official policy or position of DailyO.in or the India Today Group. The writers are solely responsible for any claims arising out of the contents of this article.