Post-Pulwama: India wants Pakistan to lose its IMF bailout. But that may result in Islamabad inching closer to Beijing

Losing the IMF bailout battle might just be the opportunity a beleaguered Pakistan needs to get closer to Chinese and Saudi support.

With each new terror attack on Indian territory, Pakistan is emerging as a colossal dilemma for Indian diplomacy.

Amid anguish and anger over the Pulwama attack, India's diplomatic offensive to corner Pakistan economically may put the latter's efforts to get an IMF (International Monetary Fund) bailout in jeopardy. Pakistan, with its already battered economy and depleting forex reserves, has sought US$ 12 billion in rescue from the IMF. If approved, this will be the 12th bailout to Pakistan since the late 1980s.

However, the flip side of India's offensive could be that a delayed or abandoned IMF bailout may push the beleaguered neighbour closer to China. So far, the USA and EU have not lent diplomatic support to Pakistan's efforts for an IMF bailout. As per reports reaching Delhi, China has promised about US$ 3.5 billion help to Pakistan’s dwindling forex reserves — Chinese officials are expected to arrive in Islamabad later this month to finalise the package. 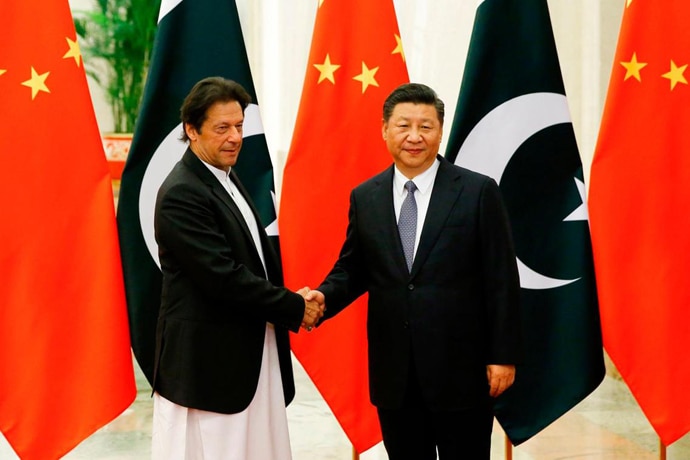 It is all between friends: Beijing's promise of USD 3.5 billion to Pakistan’s dwindling forex reserves has inched Xi Jinping and Imran Khan a step closer in their friendship against India. (Photo: Reuters)

The China-Pakistan Economic Corridor (CPEC), with investments worth a whopping US$ 46 billion, is already under implementation — this will connect China's largest province, Xinjiang, with Pakistan's Gwadar via Pakistan Occupied Kashmir (PoK) and Balochistan through various infrastructure projects.

India is going all out to get FATF to keep Pakistan in its grey (subsequently black) list in order to thwart the latter's efforts to get an IMF bailout, thus making way for more serious sanctions in Islamabad.

In June 2018, FATF placed Pakistan back on its terrorism financing 'grey' monitoring list, in a bid to push Islamabad to halt support for militant groups. The FATF move was the result of US and European nations forcing Pakistan to do more to combat militancy.

It is a coincidence that FATF’s plenary meetings are taking place in Paris amid India's global offensive to now corner Pakistan.

The FATF will review Pakistan's anti-terror efforts in the areas of Terrorism Financing Risk Assessment, the customs department's efforts to stop cash couriers, the implementation of the United Nations Security Council resolutions and inter-agency coordination. Based on these, Islamabad had been given a 27-point action plan that the country will implement by September 2019.

Much before the Pulwama attack, India had upped the ante against Pakistan. The neighbouring country had barred Jamaat-ud-Dawa (JuD), Falah-e-Insaniyat Foundation (FIF), Lashkar-e-Taiba, Jaish-e-Mohammed and four other terror organisations from raising funds.

Going by the strong global reactions, India is likely to succeed in blocking Pakistan's way on the crucial FATF revival and the IMF bailout — however, it is important to note that New Delhi appears more concerned about the aftermath of this expected success. Pakistan has already started scouting for fresh financial support from China and the UAE in the wake of the probable risk to its bailout. Pakistan’s foreign currency exchange remains at the precipice, despite commercial loan deposits of US$ 2 billion from China and US$ 4 billion from Saudi Arabia and the United Arab Emirates. Pakistan's reserves stand at US$ 8.2 billion — hardly enough to cover two months worth of imports.

Beijing is ready to extend fresh support to Pakistan. Even Saudi Crown Prince Mohammed bin Salman — in his recent visit to Islamabad — fixed deals worth more than US$ 20 billion in favour of the besieged Pakistan economy.

Pak-China bonhomie has always been a big fix for India.

In the wake of fresh events, Indian diplomacy appears more guarded in its reactions as any escalation may end up further strengthening Sino-Pak bonding.

Also read: How China is sucking Pakistan dry with CPEC

#Pulwama terrorist attack, #Imf bailout, #China-Pak Relations, #China Pakistan Economic Corridor
The views and opinions expressed in this article are those of the authors and do not necessarily reflect the official policy or position of DailyO.in or the India Today Group. The writers are solely responsible for any claims arising out of the contents of this article.