Beijing's consistent aid to Islamabad on varied fronts has psychologically strengthened the latter's will to support terrorism against New Delhi.

Prime Minister Narendra Modi, during his recent visit to the BRICS summit in Hangzhou, had a meeting with Chinese President Xi Jinping. As reported by the media, according to a briefing by the ministry of external affairs, Modi, at the meeting, said: "Our response to terrorism must not be motivated by political considerations”.

He stressed that “to ensure durable bilateral ties and their steady development, it is of paramount importance that we respect each other’s aspirations, concerns and strategic interests".

In his address to BRICS leaders, the PM strongly intervened on the issue of terrorism and urged that the BRICS nations must intensify coordinated efforts to isolate the supporters and sponsors of terrorism.

The message was loud and clear to Pakistan for its active support to terrorism (against India), and to Beijing for its consistent assistance to Pakistan on varied fronts, which has psychologically strengthened Pakistan’s will to conduct its policy of supporting terrorism against India.

The China-Pakistan alliance is said to be higher than the mountains and deeper than the seas. Pakistan’s relationship with China, which was formalised with a major step by the two countires in 1963 with the signing of the Shakasgam Valley agreement, has continued to grow, given Beijing’s strategic interests in the region and its stong desire to neutralise India’s growth.

For Pakistan, Beijing served the purpose of not only fullfiling its defence requirements but also providing Islamabad diplomatic support against India and the US on various occasions.

Pakistan turned towards China for support after the 1965 India-Pakistan War, when the US suspended defence supplies to Pakistan. A need to diversify its sources of weapon supply was felt strongly and Beijing came in as a willing exporter for Pakistan.

Over the last five decades, China has provided all out military assistance to Pakistan on three critical fronts: export of defence equipment, assistance in building Pakistan’s indigenous defence capability and its nuclear arsenal. 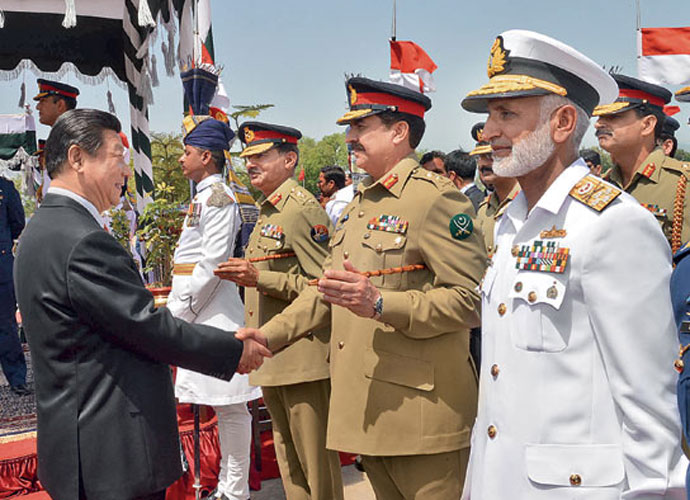 The Chinese equipment, although not as superior as western equipment, was much cleaper and affordable for Pakistan and the defence deals were facilitated by China with easy repayment loans and relaxed terms and conditions.

In the 1990s, Sino-Pakistan collaboration further flourished under US sanctions and the two nations entered into deals of production of the Karakoram-8 jet trainer and for the co-development of a fourth generation aircraft, the JF-17.

The JF-17 is co-developed by Pakistan and China and is being built by China’s Chengdu Aircraft Industry Corporation (CAC) amd the Pakistan Aeronautical Complex (PAC), Kamra. Islamabad intends to acquire up to 250 JF-17s, which represents a quantum jump in Pakistan's aircraft industry.

Over the last four decades, China has adopted an extremely supportive posture in the development of Pakistan’s nuclear programme and supplied it with a variety of technology and services, including  ballistic missiles and power reactors. China continues to be perceived as the most reliable ally of Pakistan.

Pakistan’s military modernisation and evolving military and nuclear muscle owes a lot to Chinese assistance. With the announcement of the China-Pakistan Economic Corridor and Beijing’s proposed investment of $46 billion in it, Islamabad is expected to reap significant economic and strategic dividends from this in the future.

Beijing’s diplomatic support to Pakistan has been witnessed in the past, during times of India-Pakistan crisis. China, along with Pakistan, strongly opposed India’s bid for Nuclear Suppliers Group membership.

Although Beijing has been focused on Pakistan’s defence capabilities, it has never questioned Pakistan strategic calculus against India.

Beijing needs to understand that though Pakistan can become strong with military and economic assistance, its tacit affirmation of the policy of supporting terrorism will not allow it to be a strong nation.

Pakistan’s threat perceptions would strengthen with increasing instability within the nation. The intensity and level of terrorism in Pakistan today clearly indicates the blowback of its own policies. China itself is facing violence and unrest in its Xinjiang province and it has been concerned about extremists in the province being trained in Pakistan.

For regional peace and stability, China should adopt a supportive posture towards India in combating terrorism in the region, even though terrorism might not be affecting Beijing directly at this point of time.

China’s continued support to Pakistan will obstruct India’s efforts to fight terror and would not allow containment of radicalism.

#BRICS, #Terrorism, #China-Pak Relations
The views and opinions expressed in this article are those of the authors and do not necessarily reflect the official policy or position of DailyO.in or the India Today Group. The writers are solely responsible for any claims arising out of the contents of this article.