CIA torture: Why we still can't trust the US government

There is no will in the political class to prosecute torturers on the government's payroll.

On Tuesday Dianne Feinstein released a summary of the Senate Intelligence Committee's report on the CIA's use of torture in its interrogation and detention programmes in the wake of 9/11.The partially-redacted report determined that the CIA repeatedly lied about the effectiveness of these programmes in obtaining actionable information to thwart future terrorist attacks. It also cited several instances of torture and inhumane treatment suffered by those at Guantanamo Bay and CIA black sites. 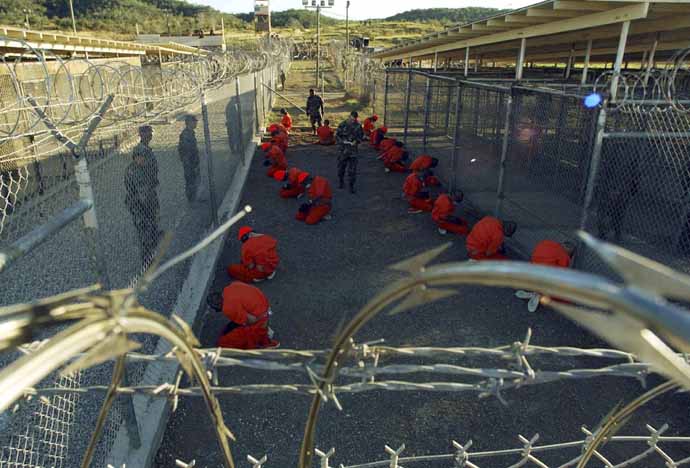 Detainees at the Guantanamo Bay prison in Cuba.

Feinstein's committee reviewed 20 torture cases frequently hailed by the CIA as being counterterrorism success stories. The full 6,000 plus page report remains unpublished and purportedly offers a damning expose on secret CIA prisons and barbaric conditions created in the name of American national security. Ironically, the report found that the CIA was unaware that information extracted from prisoners was often fabricated. Seven of the 39 CIA detainees known to have been tortured while in CIA custody produced no intelligence at all, according to internal agency records. The report also states that the CIA misled lawmakers and the media to justify funding for its operations, going as far as doctoring their assessments with intelligence obtained elsewhere in the intelligence community while claiming their original sources to be detainees subjected to "enhanced interrogation techniques", the CIA's long-winded euphemism for torture.

The CIA torture apparatus included waterboarding, or simulated drowning. The late Christopher Hitchens famously wrote about his experience undergoing the procedure in his 2008 Vanity Fair piece, "Believe Me, It's Torture". Hitchens described a typical session where he, playing the role of willing victim, was laid down on a plank with his heart slightly elevated above his head. At this point, three layers of towels were placed on top of his already-hooded face. Then the water was poured through the towels, into his nose and mouth. "...I held my breath for a while and then had to exhale and — as you might expect — inhale in turn. The inhalation brought the damp cloths tight against my nostrils, as if a huge, wet paw had been suddenly and annihilatingly clamped over my face."

The Senate report described waterboarding as "physically harmful, inducing convulsions and vomiting." Internal CIA records refer to the waterboarding of 9/11 mastermind Khalid Shaykh Mohammad as evolving into a "series of drownings." In one of Abu Zubaydah's waterboarding sessions, he "became completely unresponsive, with bubbles rising through his open, full mouth." He was medically revived and expelled "copious amounts of liquid". Such is torture by any rational understanding of the word. While waterboarding has become the poster child for CIA thuggery and subject of lively debate as to whether or not it constitutes torture, other lesser-known methods have been employed by the CIA to obtain their fabricated confessions from detainees. Sleep deprivation in shackled standing positions, with some sessions lasting up to 180 hours. Slaps. And what could be considered a playground bully tactic, "walling", where detainees are slammed up against a wall repeatedly. Cold water dousing. Forced nudity. Electric drills and guns wielded by interrogators as weapons of persuasion. Mock executions. Dietary manipulation. Threats against detainees' children, mothers and spouses. Perhaps two of the most humiliating examples of torture outlined may be "rectal rehydration" and "rectal feeding".

These are just a few of the examples of torture mentioned in the Senate report that we're currently aware of. The true horrific nature of many of these high-profile torture sessions may never be known owing to the CIA destroying video evidence.

What may be the worst outcome in light of these official confessions of state-sponsored torture is nothing. Already the all-too-handy "let's move forward" line is being regurgitated by politicians, including Feinstein, who admits in her summary of the report that there are already laws on the books which prohibit torture. Her committee determined torture was used by the CIA. Obama even managed to cough up the words which on any other day would sound hilariously understated. "We tortured some folks." So where's the accountability? The message from elected leaders appears to be that we committed horrendous acts, and let's learn from our mistakes. Let's make sure something like this will never happen again. Let's kiss and make up. But how serious are they really? If words were only handcuffs. Where are the arrests? Where are the prosecutions of those who orchestrated these programmes of torture? We could start with the two contracted psychologists who designed the programme and participated in many of the interrogations. We could move up the chain of command from there to include all of those responsible at the CIA, including then director George Tenet. It wouldn't take much intelligence gathering of our own – without the benefit of torture – to add another George to the list, the very same George who had his own role to play in disseminating lies to kick-start a devastating war in Iraq once the torture machine was churning away under his administration.

Here's what we can take away from Feinstein's committee report. There is no will in the political class to prosecute torturers on the government's payroll. We can't trust the US government to police itself as it stands. Look at the government's unimpressive cosmetic surgery performed on its troublesome policy features well after the NSA scandal broke. The NSA is still ugly! Feinstein herself was a staunch defender of the programme and blatantly lied about NSA surveillance abuses. How can we trust her to deliver the goods unspoiled by the CIA's meddling in senate affairs when it comes to redactions and editing of her own committee's report? Realistically, we can expect more of what we already have on the record for past government responses to documented war crimes and cases of torture.

There will be more criminalisation of journalists and organisations such as the WikiLeaks who distribute classified documents obtained by legitimate whistleblowers. More Edward Snowdens will have to step up and risk their lives and livelihoods to expose the clandestine crimes of the state. Because what we have at the end of the day is lip service being paid by those in government who admit to CIA torture, those who justify the use of torture in extreme situations in the name of national security, and that special breed of politician who denies anyone being tortured at all despite the evidence to the contrary. The debates will rage, and maybe a few politicians will lose jobs or posts. There will be some political shuffle board being played in the coming months, no doubt. But no lesson will be learned until somebody is held accountable and punished. Enduring more confessions from our political leaders without prison time being doled out to a few of them is torture enough for anyone.

#CIA, #Senate Intelligence Committee, #CIA torture
The views and opinions expressed in this article are those of the authors and do not necessarily reflect the official policy or position of DailyO.in or the India Today Group. The writers are solely responsible for any claims arising out of the contents of this article.