As Modi magic fades, it is time to heed to young voices on CAA

A new generation of student leaders objected to the exclusion of Muslims from the CAA. They were a new citizenry showing empathy and cosmopolitanism that the BJP does not comprehend.

The idea of well being, wellness and values is quite popular today. It echoes a fragment of a poem Robert Browning wrote where he claimed, “God’s in His heaven — All’s right with the world!” This idea of well being is extended to the political regime where the middle class feels Prime Minister Narendra Modi and Union home minister Amit Shah are in control, and it will be all right for India.

People feel Modi is doing right and have faith in his efforts. Such a political feeling needs what philosophers have often called “moral luck”, a sense of everything going right despite mistakes. As a wag put it, “because of moral luck, even politicians can appear like statesmen.”

Modi has been undergoing moral luck for several years. Even when he makes a mistake, it is read as ‘well-intended’ even by the victims as in the case of the demonetisation fiasco. Modi is seen as trying hard, doing right, and many of his fans put it, “at least he is trying,” making him sound like a candidate confronting a formidable exam. Moral luck is that irrational part of politics, a climate of faith, hope and optimism that politicians need beyond votes to sustain their survival. The question often asked in the last few months is whether Modi and his government are running out of moral luck. 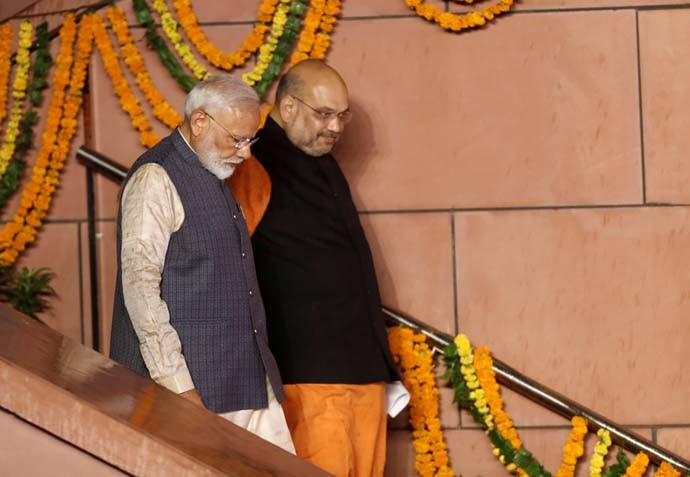 Earlier Modi-Shah duo would have gotten away waving the security, the patriotism, the divisiveness card. Today none of these work. (Photo: Reuters)

Suddenly, it does not seem electorally impeccable anymore. Modi and Shah seem to have lost their step. One witnessed it first during the Maharashtra crisis. The antics and the manoeuvrings of Shiv Sena chief Uddhav Thackeray and NCP chief Sharad Pawar made a grandmaster like Shah look a mere dilettante of Chinese Checkers. Instead of epic stalwarts, the leaders became mere players in the game.

What destroyed this even further, was the Assam debate. The threat of the Citizenship Amendment Act (CAA) triggered an epidemic of protests around the country. Youth and campuses which were seen as electoral fodders for BJP suddenly appeared recalcitrant. What was hailed till yesterday as majoritarian, has now suddenly become authoritarian. The spectator suddenly missed the Modi magic. Earlier, he could get away by labelling differing as divisive and unpatriotic. The same invective cuts little ice.

Worse, even threats don’t matter, and civil society which was once somnolent has erupted. Modi’s piety no longer appears patriotic. As one student told me angrily, “Modi is sitting on a Congress gaddi, suffering from Congress ailments. He has become too used to power and power often makes you indifferent and contemptuous of people.” One sensed the wisdom of this comment. One realised that the ecology of political perception had changed. Assam was no longer seen as the frontier, as a distant problem. Assam was a centre stage metaphor of BJP’s incompetence. It was a controversy where both ends and means lost their magic.

BJP’s definition of citizenship was read as unacceptable. It was a violation of the rules of civic, pollution of constitutional morality. Earlier, the Modi-Shah duo would have gotten away waving the security, the patriotism, the divisiveness card; today none of these work. 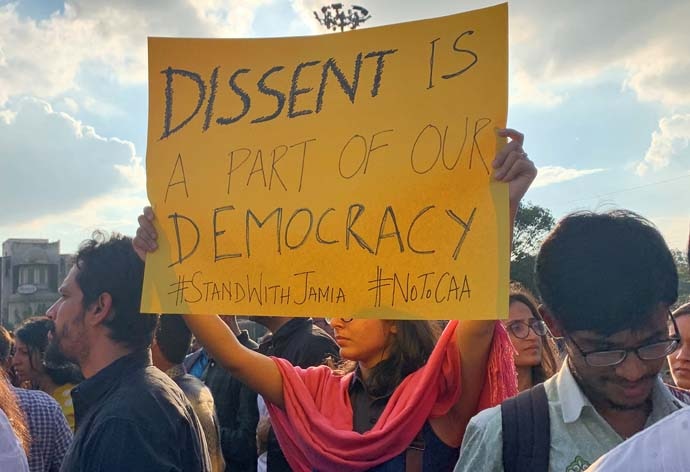 The university is meant as a site of protest, a theatre of dissent. Lathi-charging in campuses was unnecessary. (Photo: Reuters)

What went wrong? One senses three objections to the Citizenship (Amendment) Act or CAA. Firstly, despite its humanitarian hypocrisy, pretending that India is the new Israel for Hindus, the BJP does not understand the power and hospitality of an idea of citizenship. Citizenship is a sense of homecoming, not a clerical process of certification. It is more than entitlement. In providing access, they have destroyed a sense of belonging.

Secondly, the means was problematic. Lathi-charging in campuses was unnecessary. The university is meant as a site of protest, a theatre of dissent. To impose violence on a sense of difference was seen as polluting democracy. The student protest reminded Shah of a difference that he and his regime are often forgetting. They keep crafting electoralism with democracy. Obsolete power electoralism deals with votes, democracy deals with citizenship. Worse, Shah often used NRC as an electoral threat to destabilise Mamata Banerjee in West Bengal. The words were the same, the script seemed the same, but the context, the milieu, the moral luck of the regime seems to have changed.

Thirdly, there was ineptness to BJP’s political strategy. It rightly felt that the Opposition was effete. At the level of political parties, it was correct, at the level of students and civil society it bungled. A new generation of student leaders objected normatively to the exclusion of Muslims from the Act. They were not the usual political voices. They were a new citizenry showing empathy and cosmopolitanism that the BJP does not comprehend.

The party’s obsession with electoralism as a mathematical game has turned the BJP indifferent to democracy, to the sanctity of citizenship, to the sense of fairness so critical to the everydayness of democratic life. This wisdom is coming from students who see open citizenship as part of an open sense of India. In fact, the last week has been like a fable, a lesson to the regime in power. It is a variant of actions dictums, that power corrupts and absolute power corrupts absolutely. The student protests show that absolute power can corrupt by turning you obsolete. The BJP suddenly appears authoritarian and outdated. How this works out is what citizens shall watch closely over the next few weeks.

#Commerce, #Science, #Narendra Modi, #Jamiaprotests
The views and opinions expressed in this article are those of the authors and do not necessarily reflect the official policy or position of DailyO.in or the India Today Group. The writers are solely responsible for any claims arising out of the contents of this article.