What the Gandhis Gave: Those who accuse Rahul and Priyanka Gandhi of being dynasts know nothing of the Congress family's sacrifices

If Sonia Gandhi had wanted to be PM, nothing could have stopped her. The same goes for Rahul Gandhi much earlier. As I see it, they are not in politics for its sheer power, but for something else.

Come election season and the most commonly levelled allegation against the country’s oldest political party is that the Congress is a party of dynasts where the Nehru-Gandhi family rules the roost.

Well, had it really been so, former Prime Minister Rajiv Gandhi’s widow, Sonia Gandhi, would have not only succeeded him on the nation's top chair, but also emerged among the top three longest serving PMs of the country, the others being Indira Gandhi (over 14 years) and Pandit Jawaharlal Nehru (about 17 years). A time of joy: Sonia Gandhi came to India when she married for love. Political power was far from her mind. (Source: Facebook/PriyankaGandhi.in)

With her possible 10 year-term, Sonia could have been third on the list where her mother-in-law, Indira Gandhi, is No 2 with over 14 years serving as India’s Prime Minister. And Indira Gandhi was second only to her father Pandit Jawaharlal Nehru’s iconic era running straight for 17 years.

Those who make allegations of practising dynastic politics against the Congress seemingly ignore the exemplary sacrifices made by the Nehru-Gandhi family.

Of the three PMs who came from the family, two of them died for the country. While Indira Gandhi was assassinated while in office in 1984, seven years later, her son Rajiv, met the same fate while campaigning before elections.

Since then, despite three opportunities of coming to power (when the PM was from the Congress party), Sonia and her children, including Rahul Gandhi, didn’t opt for this even once.

History stood witness to these facts.

In 1991, a day after the first round of polling for General Elections took place on May 20, Rajiv was assassinated while campaigning in Tamil Nadu.

Though not in a majority, the Congress won the polls and formed the government that year, with Sonia refusing to enter politics. The late PV Narasimha Rao instead became PM.

Five years later, in 1996, the Rao government was voted out.

Following repeated persuasion to salvage the Congress party’s sinking boat, Sonia joined the Congress as a primary member in 1997. A year later, she became chief of the party. And her presence gave a new lease of life to the Congress that was otherwise gasping for life. 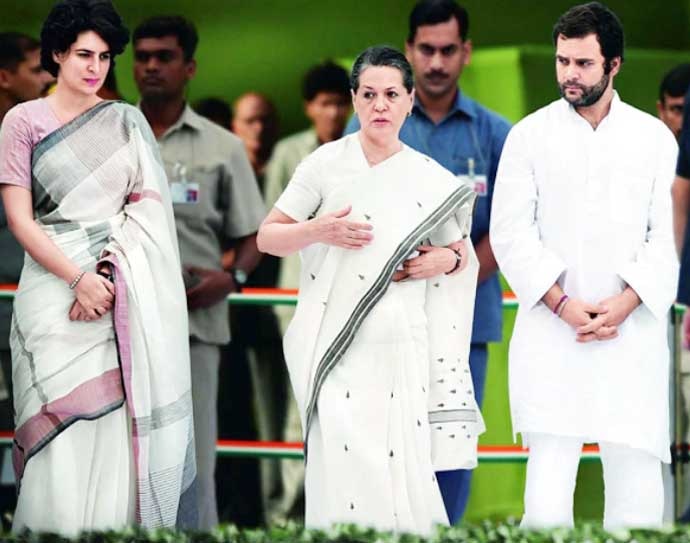 In 2004, it was under her leadership that the Congress went on to form the government in coalition with other centre-left political parties.

Sonia has since been credited for being instrumental in formulating the United Progressive Alliance (UPA), which was re-elected to power in 2009.

But being the Congress president and UPA chairperson, if Sonia could bring in Manmohan Singh, who was neither from the Nehru-Gandhi family, nor from their religious faith, to power, couldn’t she have herself become the PM instead?

Well, there were prospects and some hurdles — a look at both.

The right wing parties had publicly challenged her taking over as PM. The Bharatiya Janata Party and its allies say they kept the lady of 'foreign origin' right away from prime ministership.

That time, the BJP leader Sushma Swaraj had reportedly said she would "shave her head" in protest if Sonia was made PM. Her colleague on the right wing, Subramanian Swamy, had reportedly even written to the President, apparently claiming that appointing Sonia as the Prime Minister would be unconstitutional, given her alleged citizenship status.

But then, if the claims as made by then-President APJ Abdul Kalam are to be believed, such threat calls from adversaries couldn’t prevent Sonia’s ascension. The former President, in his second volume of his memoir Turning Points: A Journey Through Challenges, presented his version of the story.

According to Kalam, Rashtrapati Bhavan had even prepared a letter to appoint Sonia as Prime Minister — but it had to be rewritten after she told him she was instead nominating Manmohan Singh. In his memoir, Kalam acknowledges the pulls and pressures — but only to add that in the end, if Sonia "had made any claim for herself, I would have had no option but to appoint her”.

That time, addressing a meeting of the Congress Parliamentary Party, Sonia said she had listened to her "inner voice" — and would not take up the Prime Ministership. Former President APJ Abdul Kalam recounted that if Sonia Gandhi would have wanted to be PM, he would have had to invite her. (Source: India Today)

While Sonia’s prospects of becoming Prime Minister are known to the world, what has largely been ignored is that her son, Rahul, also had a chance.

He was an MP during both the UPA regimes. So, if Rajiv Gandhi could become the youngest PM after Indira’s assassination, Rahul also had a chance that way, at least in 2009, when like his father, the son was also a general secretary in the party.

But the Nehru-Gandhi family preferred a man from a minority community as the Prime Minister for two consecutive terms, in my view, in the interests of the party and the nation alike.

While Sonia’s leadership blessed the Congress with two terms in power, her successor at the president’s chair is already scripting success stories. Overriding the ‘Modi wave’, the Congress came to power in the Hindi heartland states of Rajasthan, Madhya Pradesh and Chhattisgarh in 2018.

For his adversaries, Rahul may be still be ‘Pappu’ — but, to me, his political performance says — Pappu Pass Ho Gaya!

After all, Rahul’s witty 'Chowkidar' jibe had such a lasting impact on the minds of the BJP leadership that many of them prefixed it to their Twitter accounts.

And then, we have Priyanka Gandhi who had been regularly visiting her mother Sonia and brother Rahul's constituencies of Rae Bareilly and Amethi.

Already a popular figure in the twin constituencies in Uttar Pradesh, and drawing large crowds everywhere, her formal entry into politics is only supplementing the family efforts to strengthen the Congress party amid electioneering.

It is evident that the Nehru-Gandhi family’s bahu Sonia and her two children, cruelly robbed of their father at such tender years, have today come of age.

Calling a family whose three generations have been victims of brutal terrorism 'dynasts' sounds insulting — particularly when one looks closely at their sacrifices.

Also read: A bold new Congress: From alliances to AFSPA, how the grand old party is newly asserting itself

Post your comment
#Rahul Gandhi, #Sonia Gandhi, #Dynastic politics, #Congress
The views and opinions expressed in this article are those of the authors and do not necessarily reflect the official policy or position of DailyO.in or the India Today Group. The writers are solely responsible for any claims arising out of the contents of this article.