The greatest disservice the party did was to set back by decades the cause of bona fide secularism.

Without quite realising it, the Congress under the leadership of Sonia Gandhi and Rahul Gandhi has become a toxic force in Indian politics.

The 1975-77 Emergency, during which more than one lakh journalists, Opposition leaders and civil society activists were jailed (including LK Advani and Arun Jaitley), exposed the first autocratic gene in the Congress. Indians' fundamental rights were suspended for nearly two years. The Constitution was subverted.

In 1986, Rajiv Gandhi - an essentially decent man whose career was impaled by bad advisors - planted the seed of communalism in mainstream politics by overturning through parliamentary legislation a 1985 Supreme Court order that had granted maintenance to an elderly divorced Muslim woman Shah Bano.

But it wasn't till 1998, when Sonia Gandhi took over the presidency of the Congress, that the full toxicity of the party would become evident. The crude, thoughtless overnight eviction of then Congress president Sitaram Kesri was an early sign. 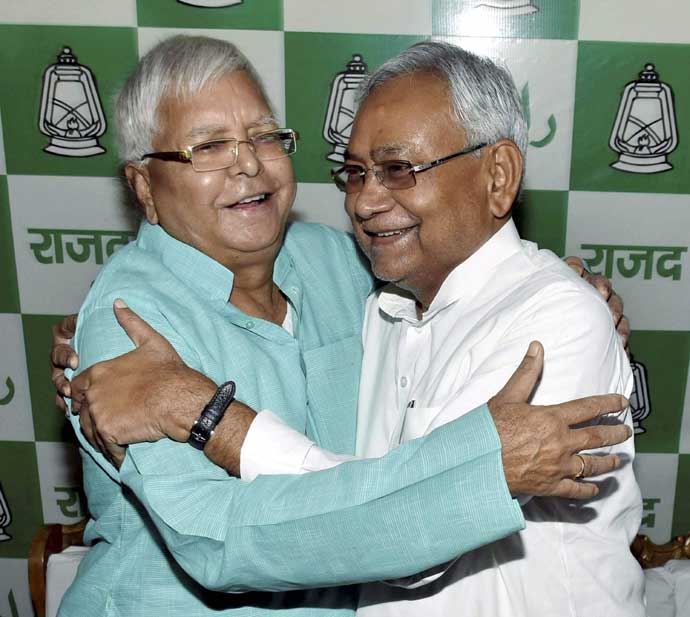 The RJD's Lalu Prasad Yadav is looking at fresh jail time in the fodder scam. He is meanwhile battling charges of undeclared assets against his two sons, daughter and wife. Photo: PTI

When the Congress took power at the Centre in 2004 after a hiatus of six years, it showed its true colours. While Prime Minister Manmohan Singh was the gentle, erudite face of the Congress-led UPA government for ten years, Sonia called the shots behind the scenes.

Working seamlessly, monitored closely by a stentorian Sonia, the four-tiered Congress team presided over the UPA's two terms from 2004-14, widely regarded as India's decade of scams and sectarian politics.

The communal seed planted after the Shah Bano case in 1985-86 had by now grown into a forest of trees with "saffron terror" carved on the bark of each tree trunk by the Congress' slick four-layered operation.

The greatest disservice the Congress did was to set back by decades the cause of bona fide secularism. As I wrote in the article, "The Ayatollahs of Secularism", in The Times of India: "The two real enemies of the Muslim - communal politicians masquerading as secular politicians to win votes and Mullahs deliberately misinterpreting the holy book to retain power over their flock - form a natural alliance. Together they have enriched themselves but impoverished India's Muslims, materially and intellectually, in the name of secularism. Influential sections of especially the electronic media, suffused with hearts bleeding from the wrong ventricle, are part of this great fraud played on India's poor Muslims: communalism dressed up as secularism. The token Muslim is lionised - from business to literature - but the common Muslim languishes in his ghetto."

Scams meanwhile profilerated. Three years after the Congress plunged from 206 MPs to 44 in May 2014, most though inexplicably remain unresolved - to the NDA government's and the judicial system's discredit. But each one - AgustaWestland, 2G, Scorpene, CWG, Coalgate - is a reminder of how corruption became the new normal in 2004-14.

Cut to the present. The Congress clearly hasn't learnt its lesson. KC Tyagi, a Rajya Sabha MP from the JD(U), the party on whom rests the Opposition's hope of stitching together a credible mahagathbandhan in 2019, had this to say of the Congress: "We are very upset at the behavior of the Congress. The character assassination of our leader, Nitish Kumar, has also happened. The Congress today is not the Congress party of 1952, 1962 or 1984. It is not even a legitimate Congress party."

When even a chronic Modi-baiter like Tyagi berates the Congress as not "legitimate", Indian politics has clearly reached a point of inflection.

The Congress today is in real danger of immersing itself in a self-made borewell of toxicity. Its decision to boycott the special session of Parliament on the Goods and Services Tax (GST) is only the latest in a series of self-destructive moves.

Note the other parties which joined the Congress' GST boycott: RJD, DMK, TMC and the Left. What do they have in common? Serious charges of corruption.

1. The RJD's Lalu Prasad Yadav is looking at fresh jail time in the fodder scam. He is meanwhile battling charges of undeclared assets against his two sons, daughter and wife.

2. The DMK's A Raja, in and out of jail since the 2G scam broke, has implicated senior Congress ministers in the telecom license corruption case.

3. The TMC's top leadership faces charges in the Saradha, Rose Valley and Narada scams which have singed Mamata Banerjee's reputation for probity, quite apart from her inaction over communal riots in West Bengal.

4. The Left has been implicated in a slew of brutal communal killings in Kerala where its government is accused of complicity.

Virtually every other Opposition party, including the SP, BSP, JD(U), NCP and the JD(S), was represented at the special midnight GST parliamentary session. The four holdouts - RJD, DMK, TMC and the Left - who joined the Congress boycott spoke volumes for the party's diminished reputation.

Sonia has over the 19 years of her presidency converted the Congress into a family business ruled with an iron fist. Rahul has been inheritor-in-waiting for three years. It is an indictment of Indian democracy that India's second largest political party continues to operate like a feudal family firm.

#Rahul Gandhi, #Sonia Gandhi, #BJP, #Congress
The views and opinions expressed in this article are those of the authors and do not necessarily reflect the official policy or position of DailyO.in or the India Today Group. The writers are solely responsible for any claims arising out of the contents of this article.