How Congress tweaked India's history in its favour

The idea was clearly to perpetuate to posterity the glories of Nehru and other party leaders.

In the sci-fi cult movie Planet of the Apes, astronauts returning to Earth in a distant future confront a post-doomsday scenario. Using nuclear bombs against each other, mankind has wiped itself off as the dominant species on the planet Earth.

The astronauts visit the ruins of a once great metropolis of  America, finding nothing but dilapidation everywhere. The glories of past are indicated by stray remnants.

Imagine the scenario being played out in India. While everything else is gone, a spherical stainless steel is retrieved from what used to be the Shanti Van area of New Delhi.

The container is made of three shells. Inside the outer steel shell is another shell made of pure electrolytic copper. And, inside the copper shell are pyrex glass tubes in which some material is placed for the benefit of posterity. The contents of the pyrex glass tubes are in compete vacuum but they're in an atmosphere of helium with a critical amount of moisture. The copper and stainless steel shells are all hermetically sealed after the complete evacuation of air and filling with pure nitrogen.

And what does the material inside the shell comprise?

There are parchment scrolls containing Jawaharlal Nehru's will and testament and a narrative of the most significant domestic and international events till 1964.

Then there are three microgroove records on copper discs of Nehru's speech "Tryst with Destiny", excerpts from his address to UNO and Indira Gandhi's readings from Nehru's Discovery of India, and three reels of optical recordings of the same material.

And then there is a 2,000 feet 35mm film on Nehru's life, three specimens of a special variety of rose, portraits of Jawaharlal Nehru…

Hey… hold on! This is no science fiction. This is the old grandma’s tale from India.

Yes, you guessed it right. All this is about the time capsule - Congress party’s attempt to tweak history in future in its own favour. 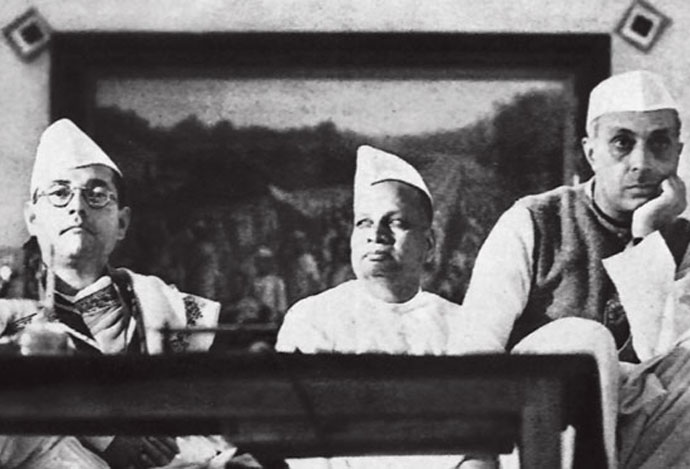 Today’s generation will scarcely believe it, but such an endeavour was executed in India in 1972, barely four years after Hollywood imagined the Planet of the Apes.

I wonder where the inspiration in India came from but the idea was clearly to perpetuate to posterity the glories of Congress leaders.

After the first time capsule was placed near the samadhi of Nehru, another one was lowered in a pit outside the main entrance to the Red Fort by prime minister Indira Gandhi on August 15, 1973.

Designed to "preserve an authentic record of our time for posterity", it contained a 10,000-words-long, Indian Council of Historical Research (ICHR) prepared scroll - a 30-page-long historical narrative of important aspects of history of India from August 15, 1947.

There was, for instance, hardly any mention of Subhas Chandra Bose in this narrative. Remember, we are talking about early 1970s.  There was no statue of Subhas Bose near Red Fort then, no portrait of him in Parliament and Indian National Army (INA) men were still not treated as freedom fighters. The classic Nehruvian era had still not dawned.

A meeting held at the ICHR on June 22, 1972 had swiftly approved a government proposal to write this narrative. The man tasked to write the draft was S Krishnaswamy, a history professor at Madras Christian College. The framework within which the account was to be prepared was indicated by Prof Ram Saran Sharma, eminent Marxist historian and founding Chairman of the ICHR, and Dr Sarvapalli Gopal, ICHR member and well-known biographer of Nehru. The final narrative was on behalf of the ICHR and a number of persons contributed to it.

According to a 1974 essay in "Social Scientist" by VK Ramachandran, after the ceremony at the Red Fort, Krishnaswamy forwarded the text of the scroll in the time capsule to Badrinath, commissioner for archives and historical research, Tamil Nadu, asking for his comments.

In an address to the students of Presidency College, Badrinath let the cat out of the bag by discussing the contents of the scroll.

Krishnaswamy was hauled up for violating official secrecy but this did not prevent the matter from being discussed publicly.

VK Ramachandran further informs us that in October 1974, Communist Party of India (Marxist) politburo member P Ramamurthy released copies of the text of the scroll to the press.

Describing the scroll contents as "an insult to the Indian people", Ramamurthy said it read "like the report of the general secretary of the Congress party".

Post-Emergency, the matter was revived politically. In 1978, the second time capsule was exhumed from the Red Fort under the supervision of a parliamentary committee.

The Janata government thereafter stated that some inaccuracies, omissions and distortions were noticed by government in the contents of the scroll.

From that time the saga of time capsule was forgotten. An attempt was made to revive it in 2012 by academic and writer Madhu Kishwar. An RTI application filed by Kishwar sought to know from the Prime Minister's Office (PMO) "the exact date and location at which a time capsule was buried by the former prime minister Indira Gandhi during the Emergency".

The PMO, surprisingly, told her that "as per records, no such information is available. This has the approval of the competent authority".

The matter was then taken up before the Central Information Commission, which gave a ruling in favour of Kishwar.

"It is indeed very strange that there should be no information about this in the PMO or elsewhere in the government," noted the commission in its decision in February 2013.

"Complete denial of any knowledge about the time capsule by all public authorities within the government including the PMO would be very hard for the public to accept," it added.

The commission directed the "PMO to revisit the subject and, after consulting its own office as well as other possible locations" locate records "on the subject anywhere in the government".

There was nothing that the government could not trace. Probably it did not want to for fear of reviving an old debate that has been part of India’s political folklore.

This is where the matter rests now. Which is to say that the first time capsule still lies buried somewhere in the salubrious Shanti Van area—waiting to be exhumed a few centuries from now. We won’t be there, but the glories of Nehru would live forever.

#Subhas Chandra Bose, #Indira Gandhi, #Jawaharlal Nehru, #Congress
The views and opinions expressed in this article are those of the authors and do not necessarily reflect the official policy or position of DailyO.in or the India Today Group. The writers are solely responsible for any claims arising out of the contents of this article.