Why did Rahul Gandhi even bother to visit Rajasthan?

The party vice president took on the BJP, but missed connecting with his partymen.

He came, they gathered, people suffered and it's back to life as usual. This sums up the visit of Congress vice president Rahul Gandhi to Rajasthan on Wednesday (April 13).

For his partymen, instead of making the roadmap for the future clear during this visit, Rahul gave them enough fodder to be occupied with mundane speculations of where the party is heading and who is leading it in the state.

To understand the state of affairs in the Rajasthan Congress, take note of a couple of recent developments.

While elections in the state are two years away, and the Congress has a minuscule presence with 24 MLAs in the 200-member assembly, former chief minister Ashok Gehlot told scribes a few days back: "If the party comes to power, the high command will decide on who will be the chief minister."

Just a week back, the budget session of the Rajasthan Assembly concluded and the leader of Opposition, Rameshwar Lal Dudi, failed to raise even a single question on the floor of the House. Giving him company was two-time chief minister Gehlot who is otherwise quite vocal. 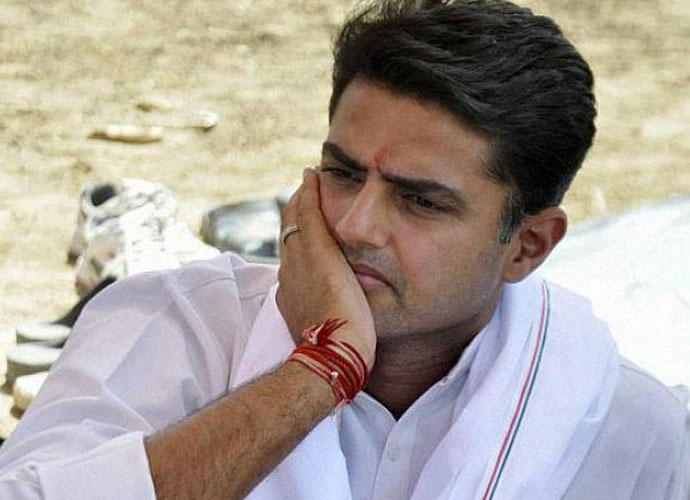 PCC chief Sachin Pilot has hardly taken any initiative to infuse enthusiasm in the workers.

A few BJP dissidents made more noise than the entire bunch of Congress legislators, with a couple of MLAs being the exception.

Quite a dismal performance by the veterans. Even worse, no one in the Congress seems to be questioning them. It makes one wonder what the state chief, or party secretary or general secretary are up to.

On one hand, the Congress leadership in Rajasthan doesn't utter a word where it should be raising its voice the loudest, and on the other hand, it creates a ruckus by holding a rally, whose possible benefit only it is aware of.

A day ahead of BR Ambedkar's 125th birth anniversary, the Rajasthan Congress organised a Dalit Sammelan, where the who's who of the party gathered and raised their voice against the Vasundhara Raje government and its non-performance.

It was pretty much the usual political fare that was on display.

What Rahul did was just half the work. He took on the BJP, but what he missed was to connect with his partymen, especially with the handful of leaders who represent the Congress in the Assembly on whether they were adequately taking up the people's cause, and how the party was faring on its agenda, and what the way forward was.

The old versus new battle is on, and despite Sachin Pilot being at the helm of affairs for over two years, there is hardly any new initiative that the 38-year-old Rajasthan Pradesh Congress Committe (PCC) chief has taken to infuse enthusiasm in the workers and he doesn't look in shape to marshal the resources at hand to the optimum.

After a humiliating defeat in the 2013 Assembly and 2014 Lok Sabha elections, a young state chief was looked up to by the party workers. He was expected to bring in new energy, be innovative in his approach and use his charisma as a young leader to the hilt. What followed were defeats in the local polls and the usual old versus new infighting.

After two years at the helm, Pilot still gets entangled into the debate over who will be the next chief minister. He is working hard to manage the old caste balance within the organisation and could easily pass off as any of his predecessors.

Adding to this chaos, the party vice president mentioned him a couple of times in his address and signalled his faith in his lieutenant. If this would set the tone for the workers, Rahul also took former chief minister Gehlot in his car from the airport to the Ram Leela ground to take feedback on the state. In doing so, he kept the Gehlot faction interested.

As some Congressmen put it, "This will keep all stakeholders involved for a few months".

It looks that the Congress has taken for granted that going by past trends, voters will ensure the incumbent government is shown the door, as it has always done, and so, the focus is on bigger gains for the future.

Alas, the Congress doesn't understand that trends in politics change in no time.

#Rahul Gandhi, #Congress, #Rajasthan Polls
The views and opinions expressed in this article are those of the authors and do not necessarily reflect the official policy or position of DailyO.in or the India Today Group. The writers are solely responsible for any claims arising out of the contents of this article.