Mob lynches Dalit woman. She was accused of being a 'witch', for cutting women's hair

Rumour-mongering and caste or religion have a sinister connection.

There couldn’t have been a more fatal twist to the “missing braids” story that’s been doing the rounds for a few days now. But added to the mystery is now the utterly shameful act of lynching a 60-year-old Dalit woman, after accusing her of, naturally, “witchcraft”.

There’s a deep and sinister connection between rumour-mongering, the targets of superstition and the victims of such cultural taboos refusing to go away despite all the scientific progress that the 21st century offers to the world. Lynching of the Dalit woman in Agra, after allegations that she must have been chopping off women’s hairs and using those locks for dark arts, is a testament to a number of interconnected and deeply saddening aspects of India 2017.

Maan Devi of Mutnai village is the first casualty and reported fatality in this particular instance, where technologies of instant communication, such as WhatsApp, and age-old recalcitrant superstitions such as the very idea of witchcraft, are inextricably fused and become handy tools of oppression in a caste-ridden society. While the news and images of women with chopped hairs, their shocked and aggrieved faces contorting in horror, the attendant mass hysteria at this strange occurrence, the inability to explain the reason or motif behind chopping off women’s hair – have all caused a legitimate cause of worry among people, the fallout of such mob mania often ends up victimising the most vulnerable among us.

It’s tempting to see the missing braids reports as a figment of imagination, but incidents have been reported from a variety of places, such as Haryana, Delhi, Rajasthan, Uttar Pradesh and Madhya Pradesh. Though largely North and central Indian, so far, this phenomenon nevertheless has got women afraid and suspicious of anyone who’s already branded the outsider, the Other.

Let’s look at the “apparitions” described by some of the victims: “burqa-clad women”, “scissor carrying”, “shape-shifting”, “foul smell”, “men clad in red-yellow outfits”, “odour”. While no reasonable explanation can be found for such mass sightings, the stereotypes conform to images thrown up again and again by history – the wicked witch, the Muslim woman, the bad Other. 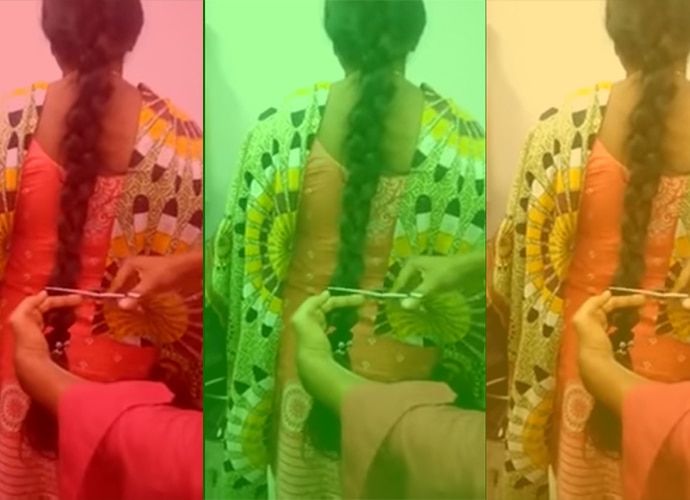 It’s expected therefore that the knee-jerk reaction would pick the most downtrodden and vulnerable to victimise and engineer a catharsis. Hence, Maan Devi – the battered, 60-year-old Dalit woman, who had “lost her way”, and therefore lost the forgiveness of the mostly upper-caste neighbourhood she had unwittingly ventured into.

What a terrible turn of events, but is it really that unexpected? We don’t think so. According to the Hindustan Times report, Maan Devi “pleaded that she had lost her way but they took her as the one responsible for chopping women’s hair in Mutnai village and killed her”, according to her daughter-in-law Kalpana Jatav.

Rumour-mongering is hazardous, but in the case of Muslims and Dalits, they can often be fatal. Barely months back, the rumours of children being kidnapped in Jharkhand led to the fatal lynching of a Muslim man. As he looked on, begging for mercy, he was being photographed, but not forgiven. He was killed brutally.

Similarly, in the case of Akhlaq Khan in Dadri, WhatsApp rumours over beef storage led an inebriated mob to the 50-year-old’s door, dragging him out and beat him to death with bricks. This sickness has seen many a manifestation in the last year or two, but in the case of Maan Devi, a terrifying mix of caste prejudices, antediluvian belief and ragged gender bias led to the most brutal form of public lynching of an old woman.

Devi’s son has named two suspects, according to the HT report, and they belong to the upper-caste Baghel community. Though police have assured action, we wonder what has India come to in the year 2017?

Our prime minister spoke of genetic engineering and plastic surgery, while talking of the elephant-headed god, Ganesh. Our ministers regularly espouse the virtues of cow urine, and steer the course of paid research towards pre-determined, Hindutva-brand of conclusions at premier technology institutions such as the IITs. We see scientists and economists resigning or being sacked from public institutions, and ill-educated sycophants taking their place. Our ideal Indian is a godman turned tycoon whose company products have been found to be placing utterly misleading advertisements on TV.

Are we back to being the “land of snake-charmers” and witchcraft, and cows? This was a stereotype we had fought hard to overcome; the Nehruvian idea of India was all about developing scientific temper, questioning everything, the democratic spirit, enshrining our wonderful plurality, eradicating superstition and blind faiths, eliminating caste system.

But no. 21st century India is a tinderbox of caste and communal prejudices, now floating in the flammable matrix of social media. So WhatsApp forwards will determine who’d live and who’d die, who’d be lynched and who’d do the lynching.

Statistics can go only so far in shaming us. But no amount of lynching data can take away from the fact that superstition is getting overt government sanction under this regime. How is this just a law and order problem, when the very substratum of our society is becoming toxic for many of us?

There’s no justice to Maan Devi until the corrosive forces leading to her lynching go away. For that, we need a full-scale social reform movement, all over again.