The BJP played well when it comes to politics of symbolism after coming to power in 2014.

The results of 2017 UP Vidhan Sabha elections suggest that the era of the convenient narrative of “BJP is equal to Brahminical Hindutva” is over, the era of “Muslims will always vote to defeat BJP” is over.

It is a bit like the fact that despite Vandana Shiva’s immense effort, 96 per cent Indian farmers use BT cotton.

Among the parties that endorse multiple fundamentalisms according to their convenience, and a party that supports only one fundamentalism, the choice may be clear to the majority of voters, for a range of reasons.

In 2007, the BSP won the Vidhan Sabha elections with absolute majority and 30.43 per cent vote share - the thumping victory became possible as it captured the majority of upper castes votes.

In 2017, the libretto has gone skewed for Mayawati, with BSP winning just 19 seats. In Scheduled Caste-dominated areas, 84 per cent seats were won by the BJP, and 41 per cent of total Scheduled Casted votes were cast for the BJP. It seems the Dalit-Bahujan masses trooped towards the Hindu right.

For the Uttar Pradesh Assembly elections 2017, 87 tickets were given to Dalits and 106 to OBCs, besides earmarking 113 tickets to upper castes, majorly to Brahmins, 66, and 97 to Muslim candidates.

The BSP had given tickets to Dalit candidates on mostly those seats that are already constitutionally reserved (85 seats) for the Scheduled Castes. The maximum tickets were given to Muslim candidates in comparison to other contesting parties (12 more than the 2012 election.)

In 2012, the BSP gave 74 tickets to Brahmin candidates, illustrating its faith in the Dalit- Brahmin alliance, which failed miserably and the BSP secured merely 80 seats.

It’s clear that in the 2017 elections, Mayawati’s social engineering strategy relied on a Dalit-Muslim alliance.

Did Mayawati want to prove that BSP is a sarvajan party, and not merely a party of Dalits and that she is interested in giving representation to all castes?

What has happened over the years is a considerable rise in political consciousness among Dalits in some part of North India, basically in Uttar Pradesh, but gradually it shows sign of decline.

In the initial period, lower caste people supported this party, but now interests of the lower castes are decreasing. What is the reason behind it?

The beginning of a new BJP regime in 2014 has forced each and every individual of the country to think on the lines of development and issues like employment.

The BSP has been proved to be unsuccessful; it does not provide an economic agenda and relies heavily on identity politics. Second, it has failed to assume the role of an umbrella party for all Dalits.

It is alleged that the BSP is dominated by the Jatav/Chamar community and has failed to bring other Dalit sub-castes on board. As a result, there has been a migration of Dalits, especially Balmikis and Pasis, which form the periphery of the BSP towards BJP.

The BJP played well when it comes to politics of symbolism after coming to power in 2014; they have systematically worked towards including the Dalits within the larger Hindu fold. They have worked on recasting their identities by portraying them as the real defenders of their religion who fought and resisted conversion against foreign forces.

A new narrative is developing which aim towards larger Hindu consolidation, and the RSS in particular has walked the extra mile to include the Dalits in party positions and ranks.

On the contrary, the BSP in overenthusiasm to become a sarvajana party or for social engineering has neglected its core constituency; the Dalits. Moreover, top party positions are occupied by caste Hindus (non-Dalits) or Muslims.

Every party has to follow a constitutional mandate to provide candidates for reserved seats - the BSP has done nothing extra by giving 87 tickets to Dalits (85 reserved seats plus two unreserved seats).

The Dalits started feeling marginalised within their party, with no other representation and incentive to work for the BSP; they were being slammed in Mayawati’s sarvajana rule.

In general election 2014, the BJP won 71 of 80 seats, reaffirming that Brahmins moved away from the Dalit-Brahmin alliance once showcased during the UP Assembly elections. The Brahmins are traditionally BJP voters; when the BJP has a viable chance of winning under the influence of the Modi wave, there is no fair chance of getting back their votes. 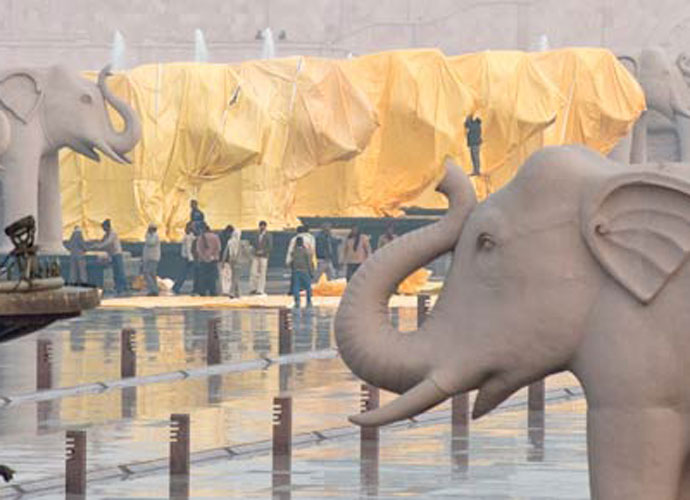 The Dalits started feeling marginalised within their party, with no other representation and incentive to work. Photo: India Today

After coming to power, the BJP has made every effort towards making Bhimrao Ambedkar its leader, be it the launch of BHIM app or converting Ambedkar’s London house to a museum, they are not leaving any stone unturned to woo Dalit voters, and any other party does not match that.

Second, the OBCs were never conventionally part of BSP - they were divided among various parties, especially Samajwadi Party (SP), and this election result shows a migration towards the BJP.

The SP-Congress alliance in UP has distressed BSP’s computation of getting the Muslim vote, but they were optimistic that their two years' work of reconstructing party units and old support base, wooing youth, and managing a dedicated social media team would count more.

However, Mayawati’s critics allege that she has lost touch with grassroots-level workers and majorly depends on information from aides to make her decisions.

Dalits have traditionally been placed in opposition with Muslims in many areas prone to riots. Be it Muzaffarnagar or the Delhi riots, Dalits were used as the front-runners or defenders of Hindus; it resulted in Dalit- Muslim antagonism. Though BSP was trying to bring Muslims into its fold, no significant work has been done to mend differences.

Identity politics has become identity plus politics and gone beyond traditional borders; no party can afford to take their core constituency for granted. The BSP failed to reassure that it was the party meant to safeguard Dalits.

From 2012 to 2017, when the BSP was the primary opposition party in UP, be it the Badaun Dalit rape case or other cases of atrocities on Dalits, the BSP was not too vocal, especially in areas where Muslims were accused, because of fears that its plan of Dalit-Muslim alliance will go haywire.

Scheduled Caste fissures, such as the Pasi community, considered traditionally as rulers and anti-Muslim, has been wooed by the BJP to bring them into its fold to consolidate Hindu identity, whereas the BSP failed to unite Dalits under one grand identity.

The absence of any contemporary social movement also impacted Dalit politics. Dalits in Uttar Pradesh are found at the bottom level in every field, be it education, representation in government services or health. They are on top when the incidence of poverty and atrocities are looked at; despite the fact that the BSP formed a government twice during the 1990s and was in power as the sole majority in 2007, the condition of Dalits has not improved much.

The party lacks democratic functioning, and Mayawati single-handidly managed all affairs, with no second line of leadership developing. Therefore, the question arose about the future of Dalit politics.

The leader of a national party, Mayawati does not represent the whole of Dalit politics and the Dalit movement, her influence is limited to UP. She does not have any significant following in other parts of the country - Punjab has the highest population but the BSP has no place there.

Second, it lacks a media management team to put forward the party agenda or prominent faces as spokespersons to represent party views; they have no presence or weak presence at national discussions.

The BJP has played well when it comes to divide and rule politics - there is no uniform Dalit movement that can consolidate Dalit identity, and there are divisions within the Dalit movement within the whole of India, and fissures and differences have not been mended.

In the present elections, there is no doubt that the BSP suffered from a lack of field workers and failed to do political homework to woo Dalit voters. Keeping in mind the 2014 Lok Sabha poll performance when, with a decreased vote share of 4.3 per cent the BSP secured no seats, it’s an urgent call to revive and revise the Dalit political consciousness.

There is need for renewed efforts from the party leadership that aims at consolidation of the Dalit votebank as the country will undergo Lok Sabha elections in 2019.

With the majority of Scheduled Caste seats and Dalit votes going for the BJP, it is understood that there has been an attrition of Dalit leadership. Still, no politician denies that Mayawati remains a dark horse. A defeat for her could deal a lethal blow to the bequest of Kanshi Ram.

Also read: Can Mayawati make the rainbow advantage work in UP polls 2017?

#Assembly elections 2017, #Mayawati, #Dalit politics
The views and opinions expressed in this article are those of the authors and do not necessarily reflect the official policy or position of DailyO.in or the India Today Group. The writers are solely responsible for any claims arising out of the contents of this article.

Neha Yadav is a social scientist and researcher at JNU. She writes on social and environmental issues. Ajay Kumar Gautam is a doctoral researcher at JNU and working in the field of Law and Governance.