Why Delhi's decongestion plan will only increase congestion

It contradicts the Odd-Even formula as it will increase traffic and reduce air quality.

When the Delhi government announced its first Odd-Even car restriction scheme, it was not surprising that it was met with stiff resistance from many experts, celebrities and yes, all car users. While the impact on air pollution (Particulate Matter 2.5) was not profound, the 15-day trial period did manage to create a significant impact in terms of congestion, apart from significantly elevating the discussion around transport and air pollution.

Therefore, it was certainly a welcome step as it signifies, even if symbolic, a willingness to put an end to indiscriminate use of cars in the city. The second round of 15-day Odd-Even plan started on April 15 and hopefully this time, one would see better data to analyse its impact.

In that light, the recently announced support by the same government to the 20,000-crore Delhi decongestion plan which revolves around building elevated roads through the city to solve traffic problems of the city is troubling.

Numerous studies from around the world have shown that it takes only a few years to fill up the additional road space due to "latent demand" and therefore, it would be a matter of time before the proposed additional spaces will be occupied by traffic.

Before getting into the merit of the proposal, let’s look at how people in Delhi move. 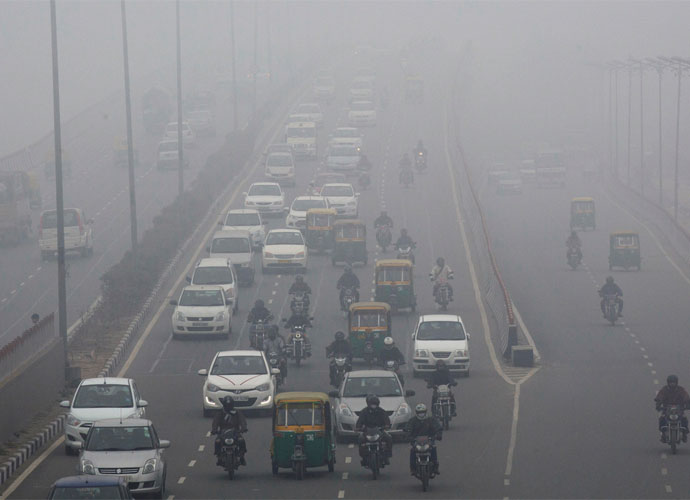 Dismal air quality of Delhi has been caused by multiple pollutants.

Therefore, it is surprising to see that while only 9 per cent trips are performed by cars, almost 90 per cent of 10,000 odd kilometers of roads in the capital are designed and used by them. Historically, Delhi has spent thousands of crores every year for the comfort of this 9 per cent by the construction of flyovers, underpasses and signal-free corridors. This has given Delhi the highest road density amongst Indian cities and the maximum number of automobiles in the country.

A 2011 study by the Indian Institute of Tropical Meteorology for Delhi-NCR found that 45 per cent of total PM2.5 emissions comes from transportation sector, which is significantly higher than the 27 per cent emission that comes from construction sector; industries and power sector account for 24 and 4 per cent respectively.

Also read: Delhi will suffer if odd-even rule is here to stay

The dismal air quality of Delhi has been caused by multiple pollutants, of which the most harmful is ultra-fine particulate matter or PM2.5 emissions. These particles are responsible for haze and reduced visibility and when inhaled, travel deep into the respiratory system, pose a serious health hazard leading to a range of respiratory ailments, including emphysema and cancer.

While it is well known that Delhi’s vehicles exceed the total vehicles of Kolkata, Mumbai and Hyderabad put together, what’s less known is that the number of people who die as a result of road crashes in Delhi is more than that of these three cities combined.

In 2014, there were 1,630 recorded road traffic fatalities in Delhi, while Kolkata, Mumbai and Hyderabad recorded 1,509. While air pollution in the city is a serious issue, safety of road users is also a cause for alarm.

The simple economic theory of supply creating its own demand means that more roads will simply result in more traffic. And while the proposal to have eastern and western expressway for bypassing traffic is a welcome step, the idea around building elevated roads, expressways, flyovers through the city will only increase demand, and in turn increase traffic and congestion, and reduce safety and air quality.

Also read: Odd or even, carpooling can breathe new life into Delhi

Therefore, the solution to Delhi’s mobility problems requires a paradigm shift in the approach. Delhi needs a three-pronged strategy to address this:

1. Avoid: Integrate land-use and mobility so as to avoid long-distance motorised travel by creating high density, compact and mixed use developments. Use Transit Oriented Development (TOD) along mass-transit corridors and integrate land use and transport planning in the city.

The implementation will not be easy, and it was not easy anywhere in the world. The celebrated mayor of Bogota, Enrique Penalosa who was reinstated by voters this year, after 14 years was almost impeached during his first tenure, when he tried to implement a series of reforms in the city. These reforms included a complete ban on street parking, reallocating road spaces, prioritising walking and cycling, amongst others.

London debated for 30 years before imposing congestion charges, and while the scheme has been successful on all counts, there is constant threat to do away with it. This is because although car users are a minority, they’re often far more influential.

As Dario Hidalgo, who worked closely for the world famous Transmilenio BRT system of Bogota says, "If you sow roads, flyovers and expressways, you will harvest congestion, pollution and road accidents." Therefore, the solution to Delhi’s mobility problem is walking, cycling and public transport, and not elevated roads, flyovers or expressways.

#Traffic, #Road Accidents, #Odd-Even Formula, #Delhi pollution
The views and opinions expressed in this article are those of the authors and do not necessarily reflect the official policy or position of DailyO.in or the India Today Group. The writers are solely responsible for any claims arising out of the contents of this article.