Demonetisation is a sacrifice of the poor to punish the rich

Just because the sin is ours doesn't mean the burden should be ours as well.

At this point it is undeniable that the people who are suffering the most as a result of India’s demonetisation drive are the poor. Over 55 have died across the country. Many are skipping meals daily to cope with the pressure. Some are unable to feed their children or pay for necessary medical treatment.

We have been asked to “bear pain". As an urban middle-class professional I too have suffered. Over the past few weeks I have spent about six hours in lines in front of my bank and at various ATMs across the city. One time I ate pasta instead of a kathi roll because the pasta place accepted credit cards and the roll dukaan was cash-only. Few would argue that these two sacrifices are commensurate, however much they understand that a good kathi is far tastier than the best pasta on offer.

It emerges that a move aimed at wiping out black money, at halting the excesses of the rich, is demanding by far the largest sacrifice from the poorest of the poor.

As an anthropologist, this state of affairs actually makes a lot of sense. In many cultures across the world the logic of sacrifice to expiate collective sin demanded that the purest, rather than the most corrupt, be offered up to the gods.

In an act of inversion, for collective crimes of war, violence, greed and immorality, those least guilty of the sin being atoned for were the ones offered up for the burn - a vestral virgin, a newborn lamb, a newborn human, an unblemished horse, a beloved goat, a child.

And so it is with us. Sickened by the ubiquitous joint spectres of “black money” and “corruption”, we ask “what is to be done?” and demand big action, a major change, a bold move that will come and sweep away all the degeneracy, all the pollution. The problem though, in the case of demonetisation, is the scale of it.

The most widespread logic of sacrifice is that a few are sacrificed for the well-being of the many. What is happening with demonetisation is that the many are called to sacrifice for the sins of the few.

It all seems so inefficient. Ritual sacrifice could be a bloody business, but it did have a sense of proportion: a vestral virgin or two for a city, a child or two for a village, and even in the case of the most opulent of sacrifices, 1,000-odd horses for an entire rajya.

Perhaps an economist can look at efficacious cases of sacrifice historically and come up with the ideal ratio, for this is the type of blood-letting that we seem to be after.

What sense does it make to impose on almost half of one’s population such excessive and extreme suffering in order to expiate the purported sins of a tiny, privileged elite who can buy their way out with plastic?

And in the bargain destabilise crop cycles and our food security, wholesale markets (particularly of perishable goods), and the lives and livelihoods of those who work in the country’s massive informal economy, which accounts for 93 per cent of India’s workforce?

We all know that the people we see queuing in day-long lines across vast swathes of this country are not the hoarders of proverbial suitcases of black money that we say we want to root out.

Can we be real here? The truth is that if we are anywhere along the spectrum from middle-class to rich in India, we are either black-money holding, black-money enabling, or at the very least, black-money adjacent.

If we are black money-holders, we know who we are. If we are trying to live a life of law and order and hold nothing in black ourselves, we are still complicit in so many ways. If we have bought property in a major metro in the last 20 years we have almost certainly paid a portion of it in black. 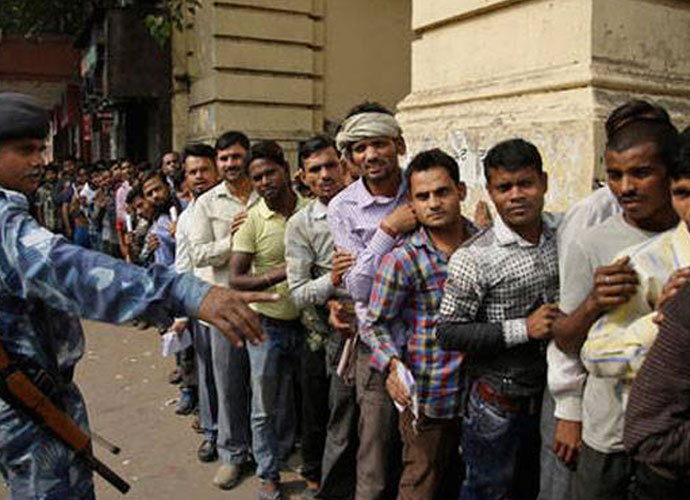 Let us offer up the meals of the poor for the black money of the rich.

That jewellery set that we bought in cash for the “discount” the jeweller gave us, that bit we slipped to a BMW-owning junior engineer for a building clearance, that bill we paid at a business created to shift money from black to white.

And if we don’t fall into any of the above categories, we know people who do - the friends and family who are positively rolling in it, and whose “businesses” just don’t seem to account for it all. We are the black money-holders, and our neighbours, friends, acquaintances and employers, not the daily wage labourers, micro-business owners and small farmers who we can all agree are bearing the brunt of it.

We also know that we, and our friends, neighbours, employers and acquaintances are doing alright through all of this. We may be facing inconveniences and feeling a bit of heat under our feet, but as an acquaintance said of his black money-holding friends, “it is all in gold and property".

In addition, we have credit cards for the white parts of our black money, and the lucky ones of us, offshore accounts. This is something the Narendra Modi government understands, and it has said it is the turn of benami property and gold next, but the obvious question is why didn't they start there? Or with targeted “surgical strikes” on those who can be identified as holding “disproportionate assets?”

I understand that as an urban elite we aren't feeling too good right now. For one thing we can’t really breathe and our masks and air purifiers aren't doing enough to stop the problem. Our children wheeze through the night and as we hear those laboured, struggling breaths we feel an anger that doesn't subside.

The first flush of our love affair with the mall and our post-liberalisation urban landscape is receding, and little has emerged to take its place. Our pleasures grow thin. Everywhere outside we see a disorder that is at odds with the order that we have come to expect in our homes, our places of work, and our places of leisure.

Hours stuck in traffic produce a form of road rage that seems to have expanded into an all-encompassing life-rage that our privilege and our money just can’t seem to assuage. The vast majority of our country simply offends us. We crave that massive, bold move that will deliver us into to our future.

At a recent dinner party a friend proposed that it would be good if a third of the Indian population died in an epidemic, echoing what a student said about farmer suicides in India - that at least a third of the population had to go, and it was nice that the farmers were taking care of this themselves and saving us the trouble.

This is what we talk about, sometimes, when we talk among ourselves.

In such a milieu, I understand that great collective sacrifice is called for. Many of us think we did our part when we stood in bank lines with our fellow citizens for the first time in years, and felt like we were part of something bigger than ourselves, acting in concert with others.

We talked to each other on Facebook about how our acts of line-standing demonstrated our commitment to doing our civic duty, and referred to ourselves as freedom fighters. But now even that grows tiresome, and we hail the jugaadu-ness of bookmychhotu.com and think of hiring a “chhotu” to stand in line for us at the banks (those of us who don’t already have one, that is).

Just because the sin is ours doesn't mean that the sacrifice should be ours as well. Let us offer up our own vestral virgins, our lambs, our unblemished horses. Let us offer up the meals of the poor for the black money of the rich.

But can we just scale it down a bit? Surely a few hundred will suffice and we don’t need to offer up most of our rural population, our crop cycles, our wholesale markets, our kirana shops, our informal economy, and our growth itself.

Can we scale it down to one?

Gandhi once said: “Whenever you are in doubt, or when the self becomes too much with you, apply the following test. Recall the face of the poorest and the weakest man whom you may have seen, and ask yourself, if the step you contemplate is going to be of any use to him. Will he gain anything by it? Will it restore him to a control over his own life and destiny? In other words, will it lead to swaraj for the hungry and spiritually starving millions? Then you will find your doubts and yourself melting away.”

Let us now recall the face of the poorest and weakest man we have seen, and track him down, for we will have found our ideal scapegoat.

Also read: Demonetisation: Modi should apologise for fooling the country

#Corruption, #Black Money, #Demonetisation
The views and opinions expressed in this article are those of the authors and do not necessarily reflect the official policy or position of DailyO.in or the India Today Group. The writers are solely responsible for any claims arising out of the contents of this article.

The writer is an Assistant Professor of Anthropology and has taught at the University of Pennsylvania. She currently lives and teaches in Delhi and works on globalisation and India's informal economy.