Demonetisation may be problematic, so is this racist cartoon

Hemant Morparia's 'Meanwhile in Nigeria' is wrong on many levels.

Many people on social media have been sharing a cartoon by Hemant Morparia captioned "Meanwhile, in Nigeria", which depicts two dark-skinned people, one of them saying, "It's an email from India ..." alluding to the chaos unleashed by the Narendra Modi regime’s hugely disruptive demonetisation exercise that has badly affected the lives of hundreds of millions of people, besides claiming scores of lives thus far. 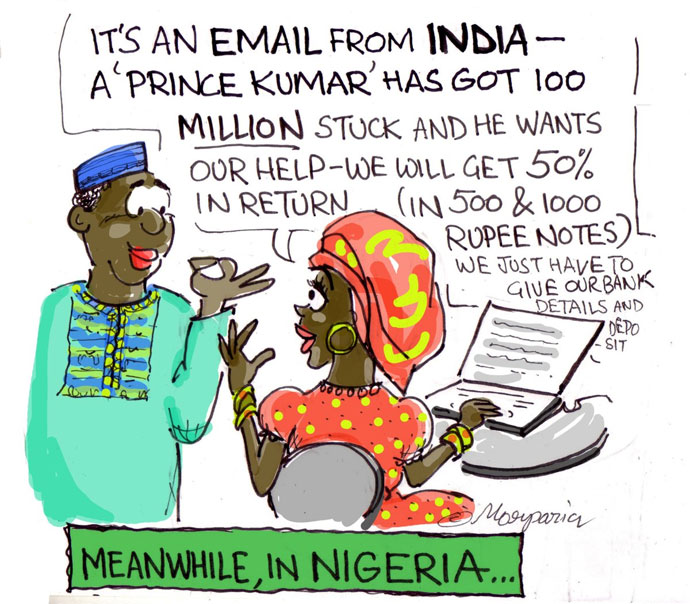 Morparia is a brilliant cartoonist who is most often spot on with his jibes against the antics of the Bharatiya Janata Party (BJP) and the Congress. But this particular cartoon is problematic on two counts:

First, the cartoon smacks of racism.

Nigerians are far from being the sole sources of the familiar scam emails, namely those stating that an inheritor of enormous fortune needs help in getting a vast amount transferred and seeking bank account details.

It is believed that the first wave of such emails emanated from Nigeria, and hence the name “Nigerian prince” or “419” – the section of the Nigerian criminal code which deems such appeals illegal.

Email fraudsters are now known to abound in most climes. In fact, they have had their precursors since the 16th century in the form of the “Spanish Prisoner Letter” – fraudsters claiming to represent an imprisoned aristocrat who can be freed with financial help from the addressee with the spurious promise that the latter will be generously rewarded.

Second, the cartoon plays into the Modi regime's propaganda regarding “black money”, that it would mean inconvenience for those with huge piles of unaccounted wealth.

A lot of those with unaccounted stashes – especially the financiers of the BJP ­– would have long ago laundered their stuff. In fact BJP’s own MLA in Rajasthan, Bhawani Singh Rajawat, is widely reported to have said that “Ambani and Adani” had been tipped off.

In rural areas there are few bank branches and each under-staffed branch caters to a cluster of villages. Scores of people have died waiting in queues, being denied medical treatment for not possessing legal tender, or through suicides and murders.

Meanwhile there has been the spectacle of former Karnataka BJP minister Gali Janardhana Reddy performing the lavish wedding of his daughter named Brahmani, spending hundreds of crores of rupees.

Both BJP and Congress leaders were in attendance. Reddy was a minister in the cabinet of BS Yeddyurappa, who was chief minister between May 2008 and July 2011, when he was replaced by DV Sadananda Gowda (now a Union cabinet minister) following interventions by the BJP high command led by LK Advani to deal with rumblings over massive corruption allegations against the state party’s leaders.

Yeddyurappa subsequently left to form the Karnataka Janata Paksha, only to be welcomed back into the BJP just months before the 2014 general elections, as by then, the national leadership had passed from Advani and others to Modi and his chief henchman Amit Shah.

Cartoonists ought to target moneybags close to the current establishment who would long ago have converted all their dosh, and not some anonymous “Prince Kumar”. One has to also keep in mind the fact that African students in Indian cities including Bangalore and Delhi sometimes face racist attacks.

Cartoons depicting them in poor light are hardly the way to go about while commenting on current events.

Post your comment
#Demonetisation
The views and opinions expressed in this article are those of the authors and do not necessarily reflect the official policy or position of DailyO.in or the India Today Group. The writers are solely responsible for any claims arising out of the contents of this article.