As a society we are becoming too conscious about who we share our public spaces with.

As the modern Indian middle-class, we are clearly faced with much more pressure than just earning salaries that can afford us weekend trips to malls. A recent angry Facebook post from filmmaker Ashish Avikunthak, who was denied entry into a Kolkata mall because he was wearing a dhoti, shows the pressures of carrying a fat wallet, and also looking like you are carrying one.

Apparently, Avikunthak was allowed in after he argued in English — indicating he was from a social class that wears the dhoti out of choice — not as a mark of their not mall-worthy profile. In protest, the filmmaker chose to not go in.

It's not the first time dhoti has led someone being denied entry into premises frequented by the supposed upper echelon. Few years ago, a Tamil Nadu Cricket Association Club denied entry to Justice D Hariparanthaman, a sitting judge of Madras High Court, for showing up in a dhoti. The incident ignited a debate on what J Jayalalithaa, the then TN CM, called "sartotial despotism" and led to passing of Dhoti Bill, which introduced a one-year jail term for denying entry to people wearing the dhoti, or other traditional outfits.

Despite their similar looking profile, unlike lungis, dhotis have been very much a part of formal dressing for Indian men; they are worn by fewer people, may be on fewer occasions, but dhoti fans are very much around.

A look at numbers from NSSO's 68th round survey on consumption to give an idea of how widely, or less used a cloth dhoti is:

Is it still a cloth of choice? Very much, though for fewer people. About 1.8 per cent sampled rural households were found to be using this humble garment. 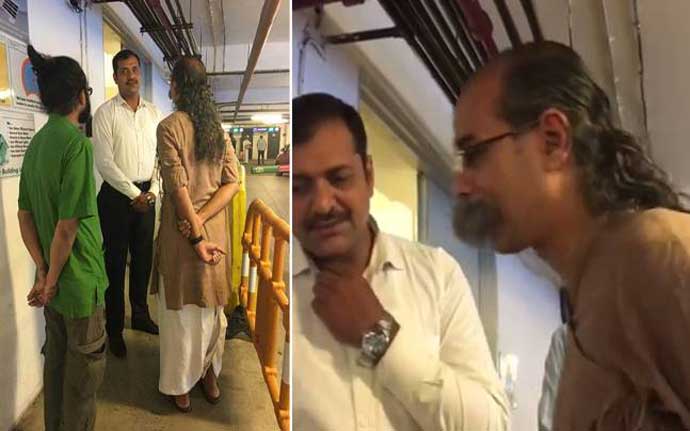 But experiences tell us, these incidents are not about the cloth! Photo: Facebook

Has it disappeared from urban areas? Definitely not. A little more than two per cent urban households still have at least one male member who wears dhoti, even if occasionally.

What about West Bengal, where the incident happened: The state has much more dhoti consumers than national average: 24 per cent rural households, and about 33 per cent urban households.

Then it must be limited to lower economic classes: dhoti wearers are very much present among the top 5 per cent of the population (highest monthly per capita spenders); the dhoti was bought in at least 25 per cent households in this section.

But experiences tell us, these incidents are not about the cloth!

The recent case of a Khasi woman, Tailin Lyngdoh, asked to leave a Delhi Gymkhana Club for wearing a Jainsem makes it clear that it isn't about wearing a traditional cloth at such places; it's about the club-worthiness or mall-worthiness or interaction-worthiness of the person inside the fabric. Lyngdoh was told to leave because "maids were not allowed" to sit and dine with other guests. What's made out to be about outfit, is about class.

Almost a decade ago, in a Lucknow mall I had seen a young boy, who was not only denied entry but also rebuked by the guards for trying to get in. He was wearing pant and shirt but was clearly from a poor background. It was a time when small towns didn't have many malls; malls were an aspirational place and people would throng in to just be there, to stare at the glitz.

The wide-eyed boy couldn't make it beyond the gate. He might have caught a glimpse of what the building he gaped at from outside, looked like from the inside; he didn't argue, didn't protest, just turned back and left.

May be he didn't know English, maybe he didn't have the confidence to call the guards out for this discrimination, or maybe he was just aware of his place in society — something that we, the aspirational middle class is guilty of creating.

His argument may have created a scene but his appearance wouldn't have made people outrage over not allowing him in.

As a society we are becoming too conscious about who we share our public spaces with.

While some of us might get angry over the dhoti ban, we the consumers too, are very class conscious. We outrage over one of us being denied entry. The others? They just don't belong in our spaces.

#Ashish Avikunthak, #Dhoti ban
The views and opinions expressed in this article are those of the authors and do not necessarily reflect the official policy or position of DailyO.in or the India Today Group. The writers are solely responsible for any claims arising out of the contents of this article.