The timing of the Congress leader’s statement, which can cause a rift within his party, is significant.

Karnataka water resources minister DK Shivakumar has resurrected the Lingayat issue, said to be among the reasons for the Congress’ drubbing in the recently concluded state Assembly elections.

Speaking at the Dussehra Sammelan of the Rambhapuri seer, Veer Someshwara Shivarcharya Swami, in Gadag district, Shivakumar sought “forgiveness” from the people of Karnataka for his party interfering in religious matters. 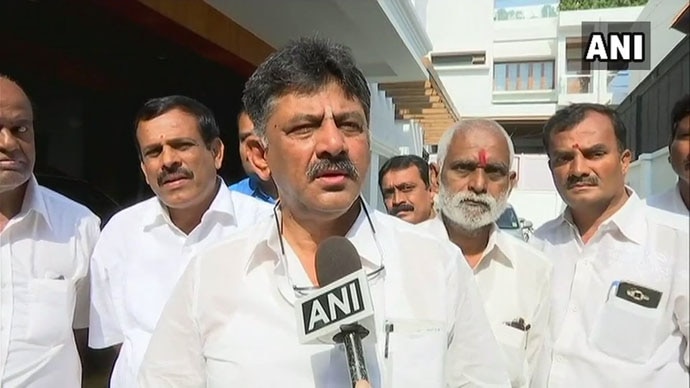 He said, “Political parties shouldn't interfere in religious matters. Many ministers, leaders spoke about it, but the election verdict is proof that it was a mistake. No political party should do politics with religion. If our government has erred, I apologise for it. Please forgive us.”

The minister later spoke to India Today TV, and stood by the statement made in Gadag. “Some may not agree with it, some may accuse me, some may think what I am saying is wrong, but I am speaking from my conscience. I have been looking at the sentiments of the people and believe that in matters of culture, religion and caste, any government or political party should not get involved. This is my personal opinion.”

The previous Congress government in Karnataka, headed by Siddaramaiah, had on March 19 accorded minority religion status to the Lingayat community. The decision came just ahead of the crucial Assembly election in the state.

The BJP had then said that the Congress government was playing with fire, and the move was nothing but divisive politics to gain votes. After DK Shivakumar’s open admission of the decision being a “grave mistake”, senior BJP leader and Udupi-Chikkamagaluru MP, Shobha Karandlaje, took to social media to slam the Congress.

The dirty Truth of Divisive Politics Being Played by @INCIndia is out with @DKShivakumar admitting on Lingayat Issue Hindu Divide PlotFor them getting Power by any means is more Important than the sentiments of crores of Lingayats in karnataka https://t.co/78oGOTkfud

However, DK Shivakumar told India Today TV that he would not react to what Shobha tweeted. “I am not a big man to react to a great leader. I am just a party worker,” he said.

Many leaders in the Opposition claim this statement has been made keeping in mind the 2019 elections, but Shivakumar says, “Let them think anything they want, but they should also know that they (BJP) too were a party to the representation [on the minority tag issue].”

State chief minister HD Kumaraswamy, who is in Mysuru to take part in the Mysuru Dasara celebrations, tried to avoid voicing his views on this, but said that the Lingayat issue had not been discussed after the new government was formed. Kumaraswamy clarified that during the previous government’s tenure, when both the communities were sparring with each other: “I said that the religious leaders from both the communities must sit together and resolve the issue. I reiterate my stand.” The previous Congress government, headed by Siddaramaiah, had on March 19 accorded minority religion status to the Lingayat community. (Photo: PTI/file)

But DK Shivakumar’s statement might cause a rift within his own party.

Patil, who in the previous government held the portfolio Shivakumar does now, also took offence to the latter voicing his opinion on the Lingayat issue publicly, saying: “This matter should be discussed within the four walls of the party. Why did the party face a setback and because of whom? Making such public statements and apologising for no reason is not done.”

But senior Veerashaiva leader, Shamanur Shivashankarappa, welcomed Shivakumar’s statement. Speaking to the media, he said, “DK Shivakumar has spoken the truth. It is good. Now everyone can march together. People will tell what we have done. There is no need to dig up the past now. He has said the right thing.”

Many are now questioning the timing of Shivakumar’s statement. Could this be due to the by-polls due in November, or a course correction ahead of 2019?

Shivakumar only says, “Sometimes, we make mistakes and when we feel we have not done the right job, I think it is better to apologise and rectify ourselves.”

Siddaramaiah had accorded the minority religion status to Lingayats after receiving recommendations by an expert committee. However, during the state Assembly election, the BJP got a huge share of seats in the north-western region of Karnataka, where the Lingayats are dominant.

Post your comment
#Congress, #Karnataka, #Lingayat issue, #Dk shivakumar
The views and opinions expressed in this article are those of the authors and do not necessarily reflect the official policy or position of DailyO.in or the India Today Group. The writers are solely responsible for any claims arising out of the contents of this article.