The reckless executive orders are not about national security or curbing corruption, but lab experiments in fear-mongering.

The recent executive orders – one from India and another from the United States of America, both emanating from topmost elected leaders of the respective democracies – have unleashed forces too dangerous and ominous, sending millions to futures of grave uncertainty, and even to their inevitable deaths. Indian Prime Minister Narendra Modi’s demonetisation of Rs 1000 and Rs 500 on November 8, 2016, and President Donald Trump’s latest decision to ban refugees from seven countries, five of which have been relentlessly bombed to stone age by successive US administrations, are orders similar in their reckless biases, aimed at nothing but furthering politics of Brand Modi and Brand Trump, the in-your-face fascists.

It is neither a stretch of imagination, nor too far-fetched to compare the two diktats, which have hit the proverbial last nails on the coffins of extended degradation. In Trump’s case, the nonstop fear-mongering of his electoral campaign, branding Mexicans as rapists, immigrants as terrorists or freeloaders, promising to build the wall in US-Mexico border and repeal of Obamacare, are now all coming true barely one week into his presidency.

In Narendra Modi’s case, the fiscal genocide that he perpetrated on the unbanked Indian poor, overnight making their hard-earned savings in cash useless, robbing months of wage labour and pushing many to take their own lives, to die of stress induced by the cash crunch, is similar in intention, as well as execution. Reeling under a prolonged drought, the suffering, debt-ridden farmers of Tamil Nadu, Telangana, Punjab, Madhya Pradesh killed themselves, while migrant labourers went back to their villages by the thousands, jobless and hungry and more pitiable than ever. 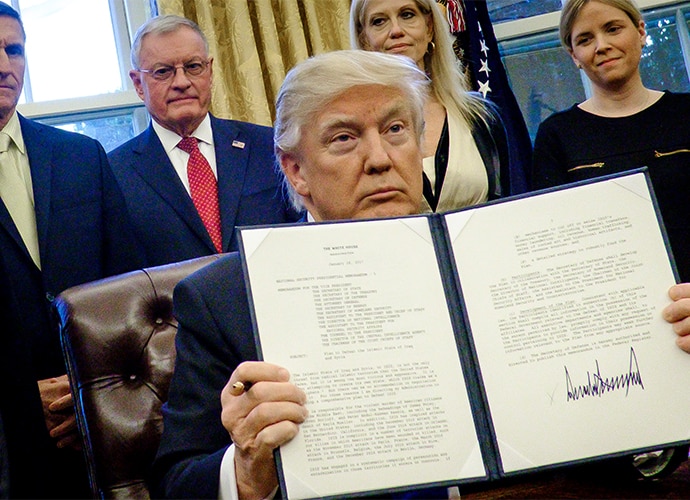 This is witch-hunt as official policy and nationalist doctrine. [Photo: Redcode]

Yet, the premise of curbing corruption and black money, and wiping out terror funds fell flat on its face, as minor scrutiny of the numbers yielded that only a miniscule portion of black money is present as cash, while most exist as assets, or circulate as part of the white economy when invested in legal activities. Moreover, reports that the ruling party itself has invested a staggering portion of its undeclared – exempted and black - income to buy as many as 170 office plots in various Indian states, meant that demonetisation was one big scam to turn black money into white, and push for digital technologies of finance as the only legitimate and taint-free form of monetary transaction.

In the case of US President Donald Trump, it’s the uglification of a regime that has held its moral high ground to systematically ravage and destabilise other countries. Trump’s travel ban on Iraq, Syria, Somalia, Sudan, Iran, Yemen and Libya in order to cut off “terrorists” from entering America, is a shamelessly bigoted act of racial profiling and territorial expulsion based on a people’s religion and domicile. This is institutionalisation of racism and Islamophobia at its heedless, official worst, akin to the late 1930s turning away of Jews fleeing Nazi persecution.

However, that Trump has banned refugees fleeing these seven war-torn states, which the US is instrumental in turning into graveyards of foreign policy, also emanates from the fact that Trump doesn’t have business interests in any of them, while the ones excluded, including Saudi Arabia, UAE, Pakistan, Qatar, Egypt, have not only been the hotbeds of global Islamic terrorism, they are also in cahoots with both Trump Industries as well as NATO. The travel ban brings to surface the simmering hypocrisies of the concerted American hegemony that stand disgustingly at odds with the foundational “American values” - enshrined in 1776 with the Declaration of Independence – of “inalienable rights of all” and the “pursuit of happiness”. Trump’s travel ban on Muslims is not about enhancing national security, but a widening of the fascist cult. Photo: [Rolling Stone]

This peeling off of any mask of moral authority, and pandering to sentiments with phrases such as “American carnage” – a euphemism for narrow, Christian white nationalism – in the case of Trump resonates with the manner Narendra Modi’s government and indeed his party and its affiliated saffron organisations, legitimise minority bashing as a mainstream activity, meant to consolidate the cultural nationalism of the newly militant Hindu majority. The RSS brand of Hindu masculinity, an offshoot of the Nazi fascination with the perfect hypermale, has the same roots as the now politically legitimised culture of eroticised white supremacist masculinity, which grabs women’s pussy and robs them of reproductive rights, just as it erects barriers on its south to cut off Mexicans while issues illegal travel ban to keep Muslim refugees away despite bombing their countries to shreds.

Trump’s invocation of Christians being singled out in Muslim-majority countries is exactly in the same vein as Narendra Modi’s own bleeding heart for Hindus being persecuted in Bangladesh and Pakistan and a selective asylum policy meant for Hindu refugees. That, in each and every country, this becomes the an expression of minority discrimination, whether they are Hindus, Muslims or Christians, is something that is closely kept under wraps and never given the stamp of the official standpoint.

The calculated thoughtlessness behind both Modi’s #NoteBan and Trump’s #MuslimBan are, therefore, not about national security or curbing corruption, but lab experiments in fear-mongering and institutional exclusionism. Modi’s exclusionism is fiscal, but also along caste and religious lines: it has impacted the Dalits, tribals and Muslims much more because they are of the poorest demography in India.

Trump’s travel ban on Iraqis, Syrians, Somalians, Yemenis, Libyans, Iranians and the Sudanese are, similarly, not about enhancing national security, but a widening of the fascist cult that sees Muslims as the enemy and profits from the resultant politics of fear. Naomi Klein calls this “disaster capitalism”, the spreading of the “shock doctrine” through compulsive and permanent war against invented and erected enemies of the state – the Muslim refugee, or the Muslim immigrant, and finally, the Muslim American himself.

The attendant aim of cult fascists like Trump and Modi, who stand for nothing but a proliferation of their personality cults at great and grave expenses, is not just to hijack the current politics of the times, but, to use a phrase coined by Pankaj Mishra, usher in the “age of anger” through their militant tribalism. The emphasis on purity and being of pure breed, of putting narrow nationalist interests before – such as India First, or America First – are therefore about creating a brand new politics of cult in their own names, at the cost of the cult of democracy that signified the latter half of the 20th century. Modi’s exclusionism is fiscal, but also along caste and religious lines. [Photo: Reuters]

Both and Modi and Trump are not unaware of the consequences; in fact they are cunningly attendant to the chaos unleashed by their respective diktats – one of financial instability that nevertheless impacted India’s informal sector, while consolidating further the top one percent that holds 58 per cent of its GDP; while the other of racial and religious instability and delegitimisation of a vast number of peoples in and outside of America.

This is politicising mayhem as did the Nazis and the fascists, and pinning all the deep economic unrest on a particular set of people. This is witch-hunt as official policy and nationalist doctrine. This is sickness as statesmanship, when the rule of one man, and a band of similar strongmen, overrides the delicately written rule of law, that promise inalienable and equal rights of liberty and justice for all.

Explicators of Modi’s note ban will meet their match in the interpreters of Trump’s Muslim ban, and both will concur that these are necessary steps taken in national interests. Yet, when national interest stems from sending people to their deaths and indulging in “legalised plunder and organised loot”, there’s something deeply immoral about that. Because it’s about falling prey to fascist personality cults masquerading as national interests and nothing else.

Post your comment
#Fascism, #Demonetisation, #Muslim Ban, #Narendra Modi
The views and opinions expressed in this article are those of the authors and do not necessarily reflect the official policy or position of DailyO.in or the India Today Group. The writers are solely responsible for any claims arising out of the contents of this article.