5 reasons Trump is a victim (Indians will agree)

All the big media houses in America have become virtual campaign managers of Hillary in their battle against the last Republican standing.

Donald Trump is the Republican presumptive nominee for this year's US Presidential elections. He is being presented as a tyrant who will run amok with the presidency if elected and destroy the global world order.

But what if he's the victim?

India may feel this more so because a lot of people identify Trump with Prime Minister Narendra Modi. Both are underdogs from the Right, attacked by the media and liberals, both are seen as anti-Muslim and have been fighting against all odds, mainly thanks to social media. Both are charismatic capitalists hated by the powerful left-liberal establishment.

Moreover, Democratic hopeful Hillary Clinton could be classified as a "Modi hater". Hillary was responsible for US President Barack Obama's lukewarm attitude towards India when she was Secretary of State.

Trump may have made a few snide remarks about outsourcing, but he has, by and large, been all praise for India. Modi and Trump could well get along well and take Indo-US ties even further.

But here are some of the reasons why Trump could be viewed as a victim by Americans and even Indians.

World over, the political class is in shambles and almost all electoral candidates have tonnes of misdeeds. Everybody has skeletons in their cupboard. But from the wide range of candidates, the American media picked out Trump for special ridicule and scorn. 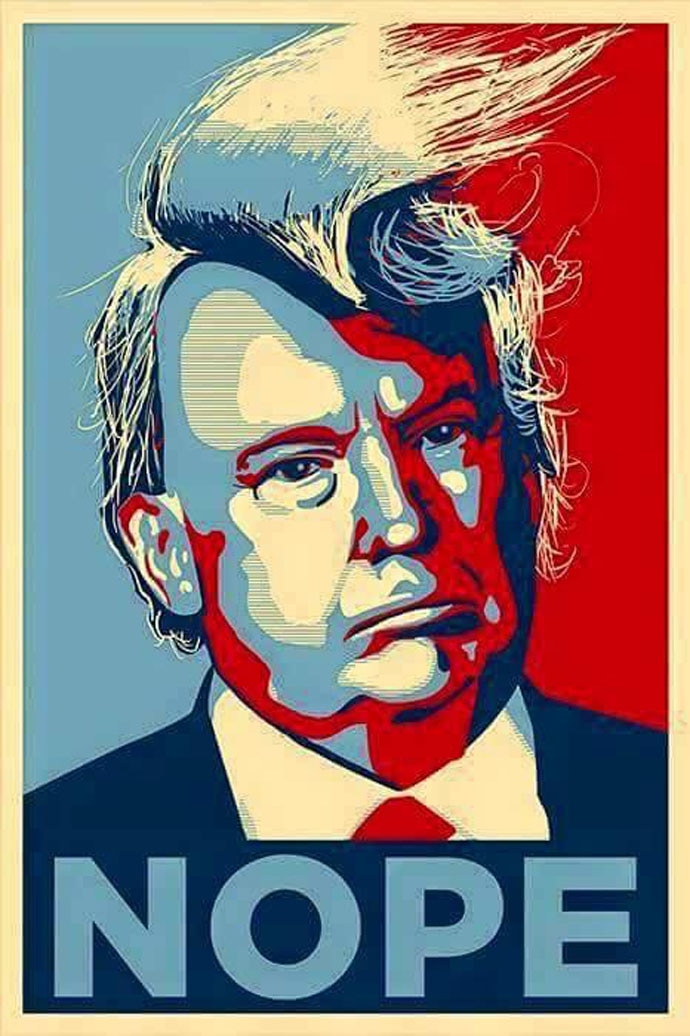 Like true liberals, they kept shifting the goalposts and even when he kept proving them wrong instead of humbly apologising, they latched on to something else. His every statement and move was attacked. If he talked 90 per cent on economy and trade issues, then they would focus on just one statement that would make him look bad. In the process, all the other candidates got a free pass.

The Economist also came with an ad which said "Donald Trump". Now "ald" and "rump" were faded to make it read "DonT"! A simple question: Is it the media's job to present and analyse news or to campaign for or against a candidate in a free democracy?

The same magazine listed Trump's presidency (if it happened) as a Top 10 global threat. The WikiLeaks emails showed a certain Lynn Forester de Rothschild replying to Democratic hopeful Hillary Clinton email titled "Miss you" and ending it with...

"In any event, I remain your loyal adoring pal. Xoxox"

For the uninitiated, Lynn's company EL Rothschild manages investments for the Economist Group. No American candidate has ever been a victim of such outright and tremendous media bias. All the big media houses in America have become virtual campaign managers of Hillary in their battle against Trump.

Also read: Media must treat Trump not as a disease but symptom

Again here the parallels between Trump and Modi are too hard to ignore. Both have boycotted a particular TV channel each and both have had their statements twisted out of proportion.

Many Indians may well identify with Trump.

Hiding the misdeeds of Hillary-Sanders

The misdeeds of women related to US President Bill Clinton are well known. Some even cried "molestation" but that's very difficult to prove against a powerful man for he was first a governor and then the president. But he still remains the only US president to have impeachment proceedings against him after his affair with White House intern Monica Lewinsky.

So why didn't Hillary leave the philanderer? Was it because she desired political power at any cost? She also has federal probes related to her official emails on a private server, the assassination of the US Ambassador to Libya in Benghazi and the employment of her aide Huma Abedin. Phew! The skeletons in her cupboard are probably 100 times more, but the focus on Trump is a 100 times more. Hillary Clinton and Bernie Sanders are getting kid-glove treatment from American media.

On the other hand, Bernie Sanders happens to be a socialist or a virtual communist. Curiously, communism has long been the "biggest enemy" of America. Yet, Sanders is selling a communist utopia to the youth of America and they are buying it. That's all fine, but why is the media playing along? Former chess world champion Gary Kasparov commented on social media:

"I'm enjoying the irony of American Sanders supporters lecturing me, a former Soviet citizen, on the glories of Socialism and what it really means! Socialism sounds great in speech soundbites and on Facebook, but please keep it there. In practice, it corrodes not only the economy but the human spirit itself..."

Also read: Why India should want Donald Trump to be US president

Again, there are parallels between Hillary-Sanders and Congress President Sonia Gandhi. Sonia is a pseudo-communist whose name cropped up in National Herald and AgustaWestland cases, but she has been given a free pass in India.

Coincidentally, in the email mentioned in the first point, Lynn told Hillary, "You have so many fans from Manmohan Singh, who smiled broadly when we talked about you, to those women who never stop dreaming."

Trump's rallies are being attacked

In a democracy everyone has every right to say what he or she wants and conduct rallies accordingly. But this right seems to be reserved only for Trump opponents. In Chicago, Trump haters blocked a road and prevented his rally from taking place. Three were arrested in Arizona in a similar protest. Sanders supporters came and disrupted a rally and had to be booted out. Predictably, Trump got bad press instead of Sanders.

In San Jose, Trump haters actually attacked Trump supporters! One had raw eggs thrown on her while another was left bleeding. Sanders supporters in a Democratic convention went on the rampage and threw chairs mouthing obscenities against Hillary. Narendra Modi and Donald Trump show similar will to power.

Go through the events of the last few months and you will find it is Trump haters who are using non-democratic means to counter Trump. Sanders supporters have been on the rampage multiple times but they have got a free pass.

Trump and his supporters are treated like pariahs and violence against them actually seems to be justified by the media.In India too, the freedom of speech/expression debates revolve around Modi haters rather than Modi supporters.

International reaction is over the top

In the United Kingdom, about 5,00,000 people petitioned the government to prevent Trump from entering the UK and its parliament was forced to discuss it. Now here's the thing. In 2003, the then US President George W Bush and UK Prime Minister Tony Blair invaded Iraq on non-existent grounds and that led to a loss of one million lives.

So for the Brits, Trump saying (just saying mind you, he has zero powers currently) that he'll keep Muslims out of America is "Sparta!!!" and Blair being involved with a decision that led to the death of a million Muslims and rise of the Islamic State is "OK!"

Trump became a punching bag in America which is still par for the course because such things happen in elections. But Trump has also become a global punching bag which is totally unwarranted.

Right now "migrants" is a hot issue and Trump-bashing is a rage because of his statements against Muslims. But policy wise he can't do anything till 2017 (if he gets elected that is). Till then, shouldn't the current US President Barack Obama be under the scanner for global crises?

But then everyone and anyone will get a free pass when a punching bag has already been decided upon.

Modi also faced similar issues. If there was a move to keep Trump out of UK, Modi was in fact kept out of USA. Both were demonised equally by the foreign press.

After 9/11, America has a problem with Muslims and looks at them suspiciously. Muslim countries have been regularly attacked and the number of Muslims killed, injured or displaced is in the tens of millions.

Also read: Do you know how many million Muslims must die for War On Terror?

America is generally an economic, military and cultural bully.

But look at the discourse and you'll conclude that America is a kind and gentle place with milk and honey and Trump is a tyrant who will change all that. If you think there is a problem then remember that Trump is merely a symptom and not the disease itself.

America is a great country and very powerful, but there are a lot of broken things there. The media is telling us that Trump is broken and not America.Trump bashing will in no way change the reality and things will only get worse if he is elected.

In India also, the NDA received a good 38.5 per cent vote share which is pretty good in a multi-party democracy (many Indian States face intense 3-party and 4-party contests) but they focused on BJP's 31 per cent and pretended that Modi wasn't really that popular.

Whenever you persecute someone, that person will get a tremendous amount of sympathy. The biggest example in history is the Romans going after Jesus Christ thousands of years back and his name is alive to this present day. Even Prophet Mohammed was severely persecuted and he gained popularity after that. Islam spread like anything after that.

Modi was attacked virulently for 12 years and that resulted in a virtual landslide for him at the elections to become Prime Minister. With every attack, Trump is growing stronger and stronger.

If Trump haters really want to stop him in his tracks, they should treat him just like any other candidate and highlight his faults and weaknesses in a rational manner and stop making him (invariably) a victim!

Electorates love victims. Too many have been elected to deny this fact. While intellectuals and liberals saw Modi as a tyrant, his supporters saw him as a victim. Exactly the same thing is happening with Trump.

#Narendra Modi, #Hillary Clinton, #US Elections 2016, #Donald Trump
The views and opinions expressed in this article are those of the authors and do not necessarily reflect the official policy or position of DailyO.in or the India Today Group. The writers are solely responsible for any claims arising out of the contents of this article.