Why the chances of Dravida Nadu are no longer illusory

Ever since the adoption of Hindi as an official language, there were large-scale protests and resentment throughout southern India.

The egalitarian nature of the Union of India has always been a volatile topic, both for political parties and secessionist interests alike. With democracy allowing political expressions of regional aspirations, each region clamouring for equality of status is common.

The southern states of India, led by the enigmatic Tamil Nadu (as enigmatic as its illustrious leaders), have especially complained of being ignored by those in power. And it is not an issue that crops up from time to time, but rather a continuous clamour for more recognition from those in power at the Centre.

An example could be that of Dravidar Kazhagam general secretary K Veeramani recently complaining of the purported seclusion of his state, pointing at the Cauvery water dispute, or the furore surrounding the NEET exams. He hinted at the fact that not only was the Centre trying to wrest state powers, but also called for resistance from all southern states against the saffronisation of any institution. 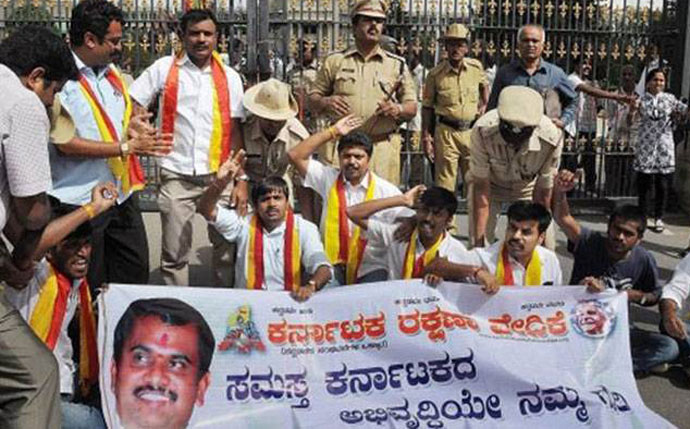 Ever since the language debate in the Constituent Assembly, a feeling of neglect spread over the southern states, especially of those in the so-called “privileged north”. Ever since the adoption of Hindi as an official language, there were large-scale protests and resentment throughout southern India. And political parties, the DMK in particular, have been more than happy to play along, more for political gains than to actually change the situation.

The DMK came into power in 1967 in Tamil Nadu mainly on that very issue, and has never relinquished its position ever since.

With the current government in power, the issue of a separate “Dravid” state, comprising all southern states, has again come to light. Exactly 55 years since the DMK propagated the idea, in 1963, and in vein of CN Annadurai’s famous statement, “the reasons for a Dravida Nadu will continue to hold good”, MK Stalin has again raised the issue. But this no longer remains the alienation issue due to which the first time Dravida Nadu was proposed.

There are various aspects in the present day to this issue.

First, the continuous ignorance by the central government of  delegations from the DMK and other southern parties that has left a huge gap between the ground realities in the south and what the Centre envisions it to be.

As acting president of the DMK, MK Stalin, recently said, “As far as Dravida Nadu is concerned, Anna (CN Annadurai), gave up the idea, but also made it clear that the reasons for the demand for its creation are very much there. Anna has been proved right, especially now that we see how the southern states are being ignored by the BJP government”.

Then comes the language issue. This is the hinge behind Dravida Nadu demands, and why that demand has sustained for so long. There is a feeling of deprivation in southern states about the imposition of Hindi on them. Ethnically, very few can call it their own tongue.

A recent issue along similar lines arose in Karnataka when on Karnataka Rajyotsava, or Karnataka Day, celebrated every year on November 1, chief minister Siddaramaiah stated that all people living in Karnataka should learn Kannada and not expect the locals to speak Hindi.

This was followed by a directive by the state government to make Kannada compulsory in schools across Karnataka.

Hidden in this resentment is a far greater factor, that of regional dominance. There has always been a sense of competition and rivalry between states in the south. This is especially apparent between Tamil Nadu and Karnataka, who have clashed most violently over the division of the Cauvery waters.

“Dravida Nadu” was to be led by Tamil Nadu, and that itself defeats the cause for the other southern states. Also, in the contemporary sense, the Dravidian identity has transformed, from a congregation of southern states as one having similar demands to that of separate nationalities based on language.

And this point itself is significant, as Dravida Nadu was to be a singular unified demand, not fragmented requirements of different states. Add to that the constant bickering among the states, with water being the main bone of contention.

Nevertheless, the idea of “Dravida Nadu” holds firm since the common masses identify with the ideas behind the demand.

No matter how utopian the demand for a separate "Dravid" state is, national politics and the direction in which the Centre-state relations are heading, it might become a reality sooner than later.

Post your comment
#North-South divide, #Karnataka, #Tamil Nadu, #Dravida Nadu
The views and opinions expressed in this article are those of the authors and do not necessarily reflect the official policy or position of DailyO.in or the India Today Group. The writers are solely responsible for any claims arising out of the contents of this article.

The author is a a student of Christ, Bangalore, pursuing a course in BA triple major in English, Political Science and History.